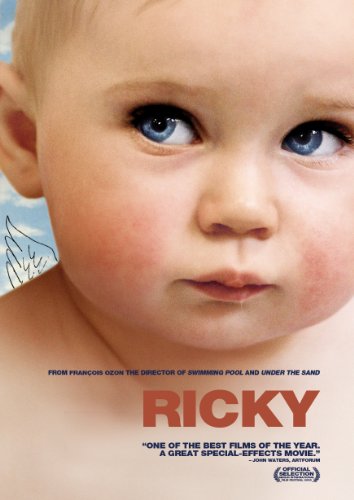 The great Franzois Ozon is at it again with this mysterious film. I've heard it's best to not know anything about this movie going in, and here's hoping the payoff lives up to the hype.

French filmmaker Francois Ozon is responsible for some of my favorite foreign films of the last decade plus. At the top of the list has to sit 2003’s mind-bending Swimming Pool (also his first English-language film), but also up there are gems like 2004’s 5X2 and the little-seen 2000 film Under the Sand. Ricky is one of two films Ozon shot in 2009, and it received a major theatrical release in France and other, major international markets, while trickling out to a few film festivals stateside, before finally making it to a handful of US theaters near the end of 2009. Then, Ricky, like the title character, himself does at one point in the film (don’t worry, this is as spoilerific as I’m getting in this review and I’ve given nothing away), disappeared, at least domestically. There was no sign of the film on the home video front, until, that is, this new DVD from IFC Films. While a Blu-ray release would have been more than a welcome sight, this high-quality (the lack of extras notwithstanding) release will have to do.

Katie (Alexandra Lamy) is mother to the lovely, seven-year-old Lisa (Melusine Mayance). She’s a blue-collar factory worker, who one day meets Paco (Sergei Lopez), a Spaniard whom she has an impromptu encounter with in a bathroom at work. This leads to Katie becoming pregnant, so she moves in with Paco, and they are a seemingly new, happy family. When Katie gives birth to Ricky (Arthur Peyret), everything changes, with work hours changing and the baby’s constant fussiness working to drive the two lovers apart. One day, when Katie returns home to find bruises on Ricky’s back, the blame falls on Paco and he immediately leaves. However, it isn’t long before Katie and Lisa discover that the bruises were not Paco’s doing…not even remotely close.

This is far from Ozon at his best, but there are so many flashes of his brilliant style of filmmaking, that it’s difficult to do anything but recommend it, at least to his rabid fan base. For starters, it doesn’t help that the big secret is at least moderately anticlimactic, but we’ll get more into that later. What’s really working against this piece of Ozon’s filmography is the near total lack of likeable characters. Katie is a miserable soul from the opening frame to nearly the last, shlubbing along at the leisureliest of paces, whilst ignoring her genius of a daughter the whole time. Still, Katie is a peach compared to the deplorable Paco. Lopez was fantastic in Pan’s Labyrinth, but here, he can never overcome the sheer miserable nature of his character. Sure, it’s tough to blame anyone but the screenwriter for this, but things might have been better if Lopez looked like he was even having the slightest bit of fun with the role. Even, Ricky, himself is one of the most annoying, constantly-crying on-screen babies I’ve ever seen. Fortunately, young Melusine Mayance is quite a revelation (Ozon has always had a way with young, female actors in his films) as Lisa, but she’s not given enough opportunities to steal scenes that are extremely in need of such thefts.

The story itself doesn’t carry the same heft and power that so many of Ozon’s other works do, but most of Ricky’s shortcomings are alleviated by the film’s amazing epilogue, which is powered by one of the best songs of all time, Cat Power’s “The Greatest.” Anyone who has yet to hear this 2006 song from Cat Power’s album of the same title, will find the last four minutes of Ozon’s film to be a near perfect introduction to it. Perfectly blended with the on- screen action, Chan Marshall’s haunting voice powers Ozon’s message home, and really makes us forget that there were so many bumpy roads on the way to this ending. Music-driven epilogues aren’t exactly a new cinematic idea, but rarely are they executed as well as this one is.

It would be criminal to reveal anything past the 40-minute mark of Ricky, especially since much has been done to hide the major secret of the film. I also recommend that you don’t pay too much attention to both the front and back cover of the DVD, as there’s a subtle reference to the secret on the front and a pretty glaring one in a glowing critical quote on the back. It’s actually slightly puzzling as to why this secret is being kept as just that, as once the secret is revealed the movie really takes off. Incorporating that huge plot point into the marketing of the film could have led to a better box office gross than the measly $2K it grabbed in the US. Of course, the horribly sappy trailer (included as the lone extra feature here) didn’t help matters one bit as it misrepresents the film in the worst of ways, translating deep, thought-provoking, and moving, into magical, and other Disney-esque buzzwords. What a shame.