The one-hour documentary, which originally aired on HBO in 2004 as part of their 'America Undercover' series, is a follow-up to Stone's first intimate interview with the Cuban leader, Fidel Castro - the controversial and compelling Comandante, which was shot in 2002. Looking for Fidel will be released for the first time on DVD and VOD platforms in the U.S. by Cinema Libre Studio on April 26, 2011. 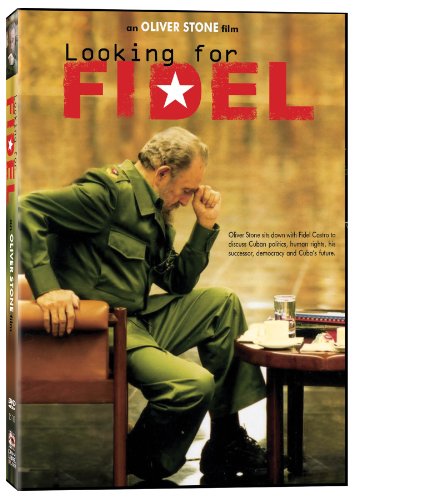 LOS ANGELES(March 31, 2011)– Following on the heels of the dynamic North American release of South of The Border, Cinema Libre Studio has finalized a deal with Domain Entertainment for the North American rights to Oliver Stone's Looking for Fidel

The one-hour documentary, which originally aired on HBO in 2004 as part of their 'America Undercover' series, is a follow-up to Stone's first intimate interview with the Cuban leader, Fidel Castro - the controversial and compelling Comandante, which was shot in 2002. Looking for Fidel will be released for the first time on DVD and VOD platforms in the U.S. by Cinema Libre Studio on April 26, 2011.

When Fidel Castro stepped down from his leadership role in 2008, many people may have already forgotten the Cuban upheaval of 2003. Following a wave of ferry hijackings where three men were arrested, tried and executed, Castro cracked down and arrested more than 75 political dissidents including several independent journalists, who were presumed to be secret agents working for the U.S. and conspiring against the revolution. Castro's actions were condemned by the world. Oliver Stone returned during this tense time to ask the leader about the circumstances leading up to these events and challenging him on his human rights record. Looking for Fidel

is a powerful snapshot in time. Stone was granted more than thirty hours with the leader where he was able to aggressively question El Commandante about the country's internal conflicts, the topic of his succession and his failing health.

Stone sits down with Castro in a round table setting along with some of the accused hijackers, prosecution attorneys and defense lawyers, creating an unprecedented and tension-filled dialogue, which offers a unique view of Cuba's situation and an insightful peek at the enigmatic leader himself.

The film also features testimonies from dissidents such as Osvaldo Paya, the wives and family members of prisoners, and human-rights lawyers who express with heartfelt emotion the difficult times through which the country is currently going.

Director Oliver Stone: I think Fidel has granted me a sort of trust in that my editing would not cheat him. This film and my two others on him are the result of that trust. He remains, most authentically, 'Castro' -- one of the strongest human beings I've ever met. Before you judge him through the eyes of a critical media, listen to the man himself. Whatever you think of him, he says what he means.

Synopsis:
Academy-Award® winning director, Oliver Stone delivers a candid, in-depth conversation with one of the most controversial world leaders of our time, Fidel Castro. Stone challenges Castro to explain actions following the execution of three political dissidents who attempted to hijack a ferry to the United States in April 2003. Stone was given unprecedented access, interviewing not only Castro, but prisoners, their wives, and dissidents-- all of whom express their views forcefully in the emotionally charged environment of Cuba today. Whether or not you accept Castro's world view, Stone's, tough but fair portrait helps to illuminate Cuba's unique and complicated place in the world. Is Castro a moral leader defending his small island against a superpower or is he an ironfisted tyrant who tolerates no criticism? Or is the truth somewhere in between?

Directed by the multi Academy Award® winning Oliver Stone (Platoon, Born on the Fourth of July, JFK), the film is a production of Spain's Morena Films. The deal was negotiated between Nicolas Veinberg of Domain Entertainment and Cinema Libre's Philippe Diaz.

It's a great pleasure and honor to continue our collaboration with Oliver Stone, says Diaz. Especially to release such a classic piece of political cinema which will remain a model of uncompromising filmmaking far into the future.

ABOUT CINEMA LIBRE: Cinema Libre Studio, a leader in distributing social issue documentaries and features by passionate filmmakers, is a haven for independent talent offering a complete array of production and distribution resources. Headquartered in Los Angeles, the Cinema Libre team has released over one hundred films and is best known for releasing the award-winning films: OUTFOXED, UNCOVERED:THE WAR ON IRAQ, Participant Media's ANGELS IN THE DUST, the Independent Spirit John Cassavetes Award Winner, CONVENTIONEERS, the Sundance Audience Award-Winning FUEL and the studio's highly acclaimed production, THE END OF POVERTY?. The company is currently releasing Oliver Stone's documentary SOUTH OF THE BORDER with films from Haskell Wexler and Rachid Bouchareb slated for 2011 releases. In 2011, Cinema Libre Studio is producing THE LAST DAYS OF KARL MARX in Algeria and Belgium as well as developing John Perkins' best-selling memoirs, CONFESSIONS OF AN ECONOMIC HIT MAN, into a major motion picture.For more information and updates, please visit: www.cinemalibrestudio.com