To Be Released on Blu-ray and DVD on June 7, 2011 via Video Services Corp. and MVD Entertainment Group

Includes landmark performances and rare interviews with Bono and The Edge of U2, Bruce Springsteen and many others.... 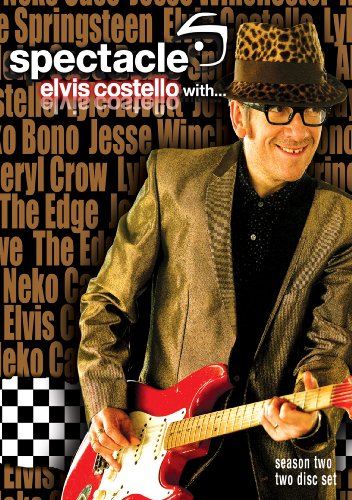 on June 7th in standard DVD and Blu-ray formats. The two-disc sets feature all seven episodes of the second season of the show, plus over one hour of bonus features.

Shot in 2009 at the storied Harlem's Apollo Theater and Toronto's Masonic Temple, Costello and his band The Imposters wow their audience with jam sessions in between Costello's colorful and creative discussions. The press has loved it:

an engaging showcase for a curious mind (No.1 pick) Time Magazine the appeal has much to do with Mr. Costello's intergenerational coolness. The New York Times we love the show! Rolling Stone

Mr. Costello is thrilled by the caliber of musicians who come on his show. Our guests have been faultlessly generous with their time, their reflections and their music, he says.

The response we've had to the show is so gratifying - not only from people who've seen it, but all the artists who've come on with Elvis have been thrilled to be a part of something that's genuinely - and passionately - about music," said co-Executive Producer and guest star Sir Elton John.
Conceived and developed by creator/Executive Producer Stephen Warden, SPECTACLE is co-produced by Toronto's Tri-Fi Productions Inc. (a partnership of SpyBox Media, Prospero Pictures and Reinvention Entertainment) and Sir Elton John and David Furnish's Rocket Pictures.

contains behind-the-scenes stories and rare audio performances. It is like having your own video library of the history of cool music.

Elvis Costello takes his performances and interviews a step further than most, capturing music history and memorable anecdotes from A-list music legends, said VSC President Jonathan Gross. As a DVD boxed set, it works both as an emotionally involving television series and as a must-see episode in the history of popular music.

ABOUT VIDEO SERVICES CORP.
Founded in 1993 by former rock critic Jonathan Gross, Video Services Corp. is a leading independent DVD distributor with offices in Los Angeles and Toronto. With a vast catalogue strong in television, sports and comedy, some of VSC's releases include the Canadian hit Corner Gas,The Roller Derby Chronicles The Tom Green Show, The WHA Chronicles and Spectacle: Elvis Costello With.... VSC also owns the e-commerce websites sportonvideo.com, laffstock.com and jewishflicks.com.

ABOUT MVD ENTERTAINMENT GROUP
MVD Entertainment Group (previously known as Music Video Distributors, Inc) was founded in 1986 by Tom Seaman, an industry veteran of more than 40 years, whose background includes retailing stints with Record Hunter, Sam Goody, Musicland, CBS Retail, and wholesale experience with Jem Records. MVD initially acted primarily as a one-stop, buying all labels' music-related VHS releases and reselling to music and video stores. In the last 10 years, MVD has transitioned from being a one stop/wholesaler for music video to a corporation consisting of three major divisions: MVD Visual, MVD Audio, and MVD Distribution. Some of the artists MVD has worked with include Sublime, Pixies, Bad Brains, Devo, The New York Dolls, Iggy Pop, the MC5, Dead Kennedys, Danzig, Marillion, Ween, Shane MacGowan, Stryper, Johnny Winter, and much more. Since 1999, MVD has released over 1500 exclusive titles. For more information, visit www.mvdb2b.com.
Notice: Undefined variable: url in /home/hellawobo/public_html/digitallyobsessed.com/r-showreview.php on line 169