The story of a young boy's intergalactic adventure to find his Martian-nabbed mother from Disney and Academy Award-winner Robert Zemeckis, complete with out-of this world special effects and jam packed with bonus features, it's a thrilling journey that's pure fun.

The Most Fun Family Film This Side Of The Universe! 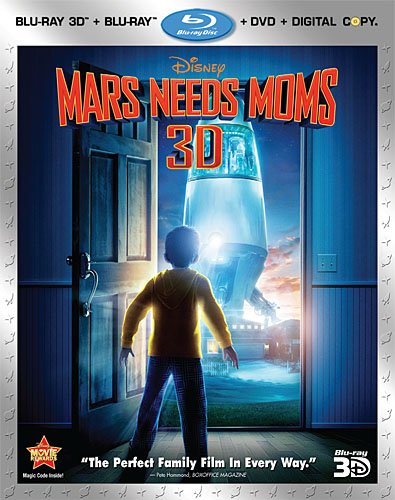 Burbank, Calif., May 6, 2011 – This Fall, families will not want to miss the chance to own Mars Needs Moms

, the story of a young boy's intergalactic adventure to find his Martian-nabbed mother as it arrives into living rooms across the country in a Blu-ray™ Combo Pack with 3D, DVD, Movie Download and On-Demand August 9, 2011. From Disney and Academy Award®-winner Robert Zemeckis (Best Director, Forrest Gump, 1994), comes the craziest adventure in the galaxy- complete with out-of this world special effects and jam packed with bonus features, it's a thrilling journey that's pure fun.

The Disney Blu-ray Combo Packs provide families with an enhanced entertainment experience – offering the flexibility to enjoy the film at home, in the car and on portable devices, in several platforms of choice (i.e., Blu-ray 3D, Blu-ray 2D, DVD + DigitalCopy) and comes packaged complete with never-before-scene bonus features, including deleted scenes, a special featurette and more. To learn more, fans are invited to visit www.disney.com/marsneedsmoms.

is brought to life by the performances of Seth Green (TV's Family Guy) as Milo, Joan Cusack (Toy Story 2 & 3) as Milo's Mom, Dan Fogler (Kung Fu Panda, Robot Chicken) as Gribble and Elizabeth Harnois (A Single Man, TV's "90210") as Ki and is directed by Simon Wells (The Time Machine, The Prince of Egypt) and produced by Robert Zemeckis (Disney's A Christmas Carol, Forrest Gump).

Bonus Features:
Blu-ray 3D:
Everything on the Blu-ray & DVD plus....
* Mom-Napping (All-new 3D Exclusive) –There's more than meets the eye during the Martian abduction of Milo's Mom. This alternate scene — completely finished in 3D — tells all.

Blu-ray 2D:
Everything on the DVD plus...
* Extended Opening - The movie begins... but wait, there's more. See it here.
* Life On Mars: The Full Motion-Capture Experience – Go way behind the scenes to the 'space' where the actors' performances are captured. This feature-length, picture-in-picture viewing mode also lets you listen to director Simon Wells and actors Seth Green and Dan Fogler give a fun and insightful look into creating the movie.
* Deleted Scenes with Simon Wells introductions (4 Blu-ray 2D Exclusive Deleted Scenes) – 7 deleted scenes of which four are exclusive to the Blu-ray 2D release. Some cool scenes ended up on the cutting room floor. Now you can see them with introductions by director Simon Wells.
* Flower Power Easter Egg – the name of the show that Ki watched and learned English from is entitled Freaks on the Street.

Movie Download:
Everything on the DVD plus...
* Deleted Scenes - Three deleted scenes with introductions by Director Simon Wells

DVD:
* Fun With Seth - The cast and crew had a galaxy of fun making Mars Needs Moms, thanks to the on-set antics of Seth Green and Dan Fogler. Watch them do the ROM dance see them compete to see who can do their verbal ROM the fastest, and much more.
* Martian 101 – Do you speak Martian? Go behind the scenes and see how the producer and cast came up with their own unique Martian language. Then learn how to speak it yourselfwith lessons from a leading Martian language expert.

Mars Needs Moms Social Media:
Those who want to stay connected with the upcoming release of Mars Needs Moms are encouraged to:
* Like the Facebook page at http://www.facebook.com/MarsNeedsMomsMovie
* Follow on Twitter at http://twitter.com/disneypictures
* View exciting trailers, video clips and more at www.youtube.com/disneymovies

Film Synopsis:
Take out the trash, eat your broccoli — who needs moms anyway? Nine-year-old Milo (Seth Green) finds out how much he needs his mom (Joan Cusack) when she's nabbed by Martians who plan to steal her mom-ness for their own young. In a race against time and oxygen, his quest to save her knows no bounds. And with some unexpected help, Milo just might find his way back to her — in more ways than one.