"I know you cannot live on hope alone. But without it, life is not worth living." - Harvey Milk 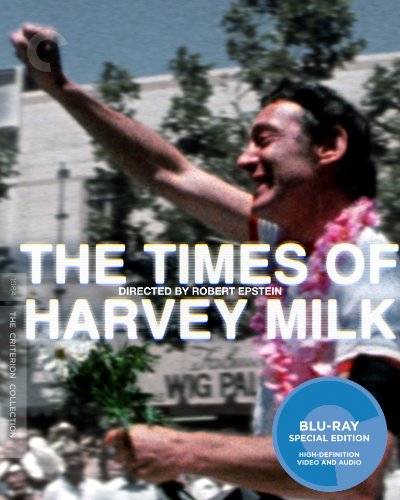 The landmark documentary about one of the human rights pioneers of the last century, in a thorough and completely absorbing Criterion package.

Watching this movie from our vantage point is both bracing and completely disheartening. That is, it's a very well made film, and a sad and inspiring and an influential one; but it's also an opportunity to reflect on how little progress we have made in the more than 30 years since Harvey Milk was assassinated. No doubt part of the renewed interest in this documentary was the release of the Gus Van Sant film about Milk&#8212but seeing this, with its archival footage and its reflections about Milk and his life and influence made so shortly after his murder, provides a kind of propulsive energy that no fictionalized feature ever could.

Perhaps you are unfamiliar with the basic facts. Harvey Milk was the first openly gay elected official in the United States, having won an election to the San Francisco Board of Supervisors in 1977. The following year, he and San Francisco Mayor George Moscone were shot and killed by Dan White, a former colleague of Milk's—he had resigned from the Board of Supervisors, and was vainly attempting to get the Mayor to reappoint him. (I'm not giving away any secrets; we learn all this in the first 30 seconds of the movie.) The movie isn't a full-boat Milk biography—it concentrates almost exclusively on the last year of his life, and its title conspicuously is not "The Life and Times of Harvey Milk." But it's incredibly effective as a portrait of the man, and providing a picture of the time and place in which he thrived and struggled.

Obviously, as much as anything else, it's the story of the gay community in northern California in the late 1970s, and about its political mobilization. Harvey Fierstein narrates and provides some necessary connective tissue, but the filmmakers rightly look to footage of Milk and interviews with some of those who knew him best to do the heavy lifting of the storytelling. And in an extended final sequence, about White's trial for the two murders, the movie maybe loses its motor a little bit, only because our hero, necessarily, is no longer with us. Still, what's done in the name of justice is appalling—White, clearly a deeply troubled man, among other things invoked what became known as the Twinkie defense (he had eaten too much junk food, his attorney said, thus compromising his judgment); and he got off relatively easily, with the strong suggestion that if one of his victims hadn't been gay, White would have spent the rest of his life in San Quentin.

I've got to imagine that some preliminary discussions took place somewhere about including this as a supplement on a full-boat Milk release, so it's especially nice to see a documentary getting this much attention on Blu-ray. Extras include a discarded original ending (02m:42s) on Milk's legacy and place in history, that probably seemed too didactic; also observations from film professor Jon Else (19m:48s) on the artistry and structure of the project. The filmmakers and friends of Harvey Milk graciously pass the baton of his legacy in Two Films, One Legacy (22m:57s), which includes interviews with the two directors, Robert Epstein and Van Sant, as well as James Franco, who played Milk's boyfriend Scott Smith in the feature. We get more of the man himself in five archival clips of Harvey Milk; and nearly a feature's worth (01h:19m:27s) of what are called director's research tapes&#8212clips of other interview subject who knew Harvey Milk, but didn't make it into the final cut. <br><br> <i>From the Castro to the Oscars</i> is the heading for footage from the film's premiere and its winning the 1984 Academy Award for Best Documentary&#8212it's presented by Kathleen Turner and her unbelievable mane of hair. Milk's murderer is the subject of the next set of extras, with contemporary news clips and a 2003 panel discussion at the University of San Francisco, with the prosecuting and defense attorneys, discussing the case of Dan White. (White was released from prison in 1984, and the following year, committed suicide.)<br><br> Milk's legacy lives on in a 2003 speech from Harvey Britt, Milk's successor on the Board of Supervisors, delivered on the occasion of the 25th anniversary of the murders; similarly sober and commemorative are remarks from the same year's candlelight vigil from members of the Moscone family. The commentary track was recorded in 2004 for a previous release, an is a wide-ranging discussion wtih Epstein, co-editor Deborah Hoffman, and Daniel Nicoletta, a still photographer who took many images of Milk&#8212they go over both getting the movie made and the circumstances of the story. The accompanying booklet is worth a look as well, particularly for the very moving essay by Harvey's nephew, Stuart Milk.</p><p class="credit" align="right">Jon Danziger May 28, 2011, 12:17 pm</p></p></div> </div> </section> <footer><p class="foot"><a href="ducu.php">Home</a> | <a href="r-reviews.php">Review Vault</a> | <a href="r-inteviews.php">Interviews</a> | <a href="r-articles.php">Articles</a> | <a href="r-apps.php">Apps</a> | <a href="r-about.php">About</a> | <a href="mailto:webmaster@digitallyobsessed.com">Contact</a></p> <div id="botad" align="center"> </div> <div id="copyright">&copy; Copyright 1999-2019<div> </footer></div> <script type='text/javascript'>var _merchantSettings=_merchantSettings || [];_merchantSettings.push(['AT', '11l8pS']);(function(){var autolink=document.createElement('script');autolink.type='text/javascript';autolink.async=true; autolink.src= ('https:' == document.location.protocol) ? 'https://autolinkmaker.itunes.apple.com/js/itunes_autolinkmaker.js' : 'http://autolinkmaker.itunes.apple.com/js/itunes_autolinkmaker.js';var s=document.getElementsByTagName('script')[0];s.parentNode.insertBefore(autolink, s);})();</script> </body> <script>'undefined'=== typeof _trfq || (window._trfq = []);'undefined'=== typeof _trfd && (window._trfd=[]),_trfd.push({'tccl.baseHost':'secureserver.net'},{'ap':'cpsh'},{'server':'p3plcpnl0694'},{'dcenter':'p3'},{'id':'808962'}) // Monitoring performance to make your website faster. If you want to opt-out, please contact web hosting support.</script><script src='https://img1.wsimg.com/traffic-assets/js/tccl.min.js'></script><script src='https://img1.wsimg.com/traffic-assets/js/tccl-tti.min.js' onload='window.tti.calculateTTI()'></script></html>