Featuring all 26 wacky adventures of an Australian wallaby and his pals in 13 original episodes (two segments per episode), this DVD release has long been anticipated by fans but has not been available in stores until now. 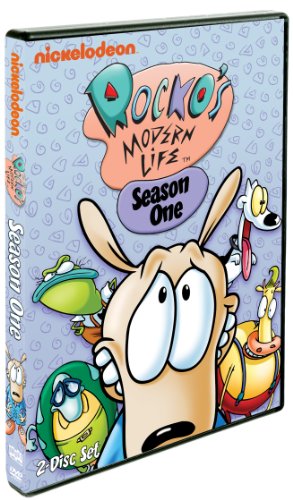 Own this Hilarity-Packed DVD Set on June 21, 2011 from Shout! Factory

Flash black to one of the most beloved animatedNickelodeon series from the 1990s when Rocko's Modern Life: Season One

2-DVD set arrives in stores nationwide for the first time on June 21, 2011,from Shout! Factory. Featuring all 26 wacky adventures of an Australian wallaby and his pals in 13 original episodes (two segments per episode), this DVD release has long been anticipated by fans but has not been available in stores until now. The collectible Rocko's Modern Life: Season One

DVD is priced to own with a suggested retail price of $19.93.

A favorite with viewers and critics alike, Rocko's Modern Life debuted in 1993. Over the course of its four-season run on Nickelodeon, the series garnered a Daytime Emmy® Award and an EnvironmentalMedia Award. Brimming with anthropomorphic social satire and offbeat humor, Rocko's Modern Life follows the misadventures of Australian wallaby named Rocko, who encounters various dilemmas and situations regarding otherwise mundane aspects of life. His best friend, Heffer, is a fat and enthusiastic cow, while his other friend, Filburt, is an easily upset turtle who often feels uncomfortable or disturbed. Ed Bighead lives next door to Rocko and detests him. These folks live in a bizarre district known as O-Town, and most of the episodes revolve around Rocko trying to cope with the absurdities and dilemmas he encounters in life.

Rocko's Modern Life is a production of Joe Murray Productions and the Nickelodeon Animation Studios. It has been sub-licensed for home video distribution to Shout! Factory by Paramount Home Entertainment and Nickelodeon.

About Shout! Factory
Shout! Factory is a diversified entertainment company devoted to producing, uncovering and revitalizing the very best of pop culture. Founders Richard Foos, Bob Emmer and Garson Foos have spent their careers sharing their music, television and film faves with discerning consumers the world over. Shout! Factory's DVD offerings serve up classic, contemporary and cult TV series, riveting sports programs, live music, animation and documentaries in lavish packages crammed with extras. The company's audio catalogue boasts GRAMMY®-nominated box sets, new releases from storied artists, lovingly assembled album reissues and indispensable "best of" compilations. These riches are the result of a creative acquisitions mandate that has established the company as a hotbed of cultural preservation and commercial reinvention. Shout! Factory is based in Santa Monica, California. For more on Shout! Factory, visit shoutfactory.com.

About Nickelodeon
Nickelodeon, now in its 31st year, is the number-one entertainment brand for kids. It has built a diverse, global business by putting kids first in everything it does. The company includes television programming and production in the United States and around the world, plus consumer products, online, recreation, books andfeature films. Nickelodeon's U.S. television network is seen in more than 100 million households and has been the number-one-rated basic cable network for 16 consecutive years. For more information or artwork, visit http://www.nickpress.com. Nickelodeon and all related titles, characters and logos are trademarks of Viacom Inc. (NYSE: VIA, VIA.B).