“The audience seems disappointed: they can’t see any difference between the queen and any other white woman.” - Narrator (Akira Ide) 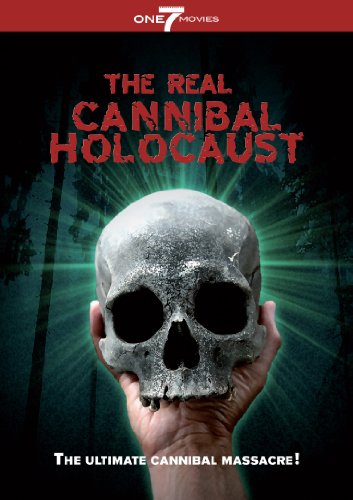 If you thought the infamous Cannibal Holocaust was tough to sit through, then One 7 Movies looks to take such disgust to a whole other level.

The “Found Footage” subgenre is running rampant in movie theaters, not only nationally, but globally as well. In recent years we’ve seen domestic films like the Paranormal Activity movies, and even international fare, such as the Rec films, and more recent efforts like Australia’s The Tunnel, and Norway’s Troll Hunter. Most film fans point their collective fingers at 1999’s The Blair Witch Project as the film responsible for this current movie going craze. However, the real pioneer here is 1980’s Cannibal Holocaust, the infamous “documentary” about a group of filmmakers who travel to the Amazon jungle and encounter a group of natives, that don’t exactly welcome them with open arms, to put it mildly. Now, seemingly out of the blue, DVD distributor One 7 Movies released what they’re calling The Real Cannibal Holocaust. In reality, the film on the DVD is the 1974 Japanese/Italian film, Nuova Guinea, l’isola dei cannibali, and this slow, middling, and, worst of all, boring documentary, does nothing but make the audience feel duped that they’ve bought something even remotely similar to the unforgettable, actual Cannibal Holocaust from 1980.

This documentary footage chronicles the people of Papua, New Guinea, with the beginning of the film focusing on a visit from Queen Elizabeth II. These natives could seemingly care less about all of the pageantry involved in her visit, as their starkly contrasting, primitive lifestyle is one of constant nudity, hardship, and survival skills. Following the on-screen appearance of the Queen, the rest of the footage focuses on various tribal rituals, ranging from rather tame, dancing, to animal slaughter, to even a surprising segment focusing on tribal homosexuality. The filmmakers close with a piece depicting a war between the tribes, but it’s difficult to tell whether the closing footage is, indeed of actual battles amongst them, or simply extra-aggressive dancing that’s been edited together in a desperate attempt to drum up some actual drama.

It’s a minor shame when a review devolves into a buyer beware warning document, but such is inevitably the case with The Real Cannibal Holocaust. Regardless of the quality of the film itself (it’s terrible), there’s virtually no getting around the fact that this is a cheap, pathetic attempt to cash in on the cult classic status of Cannibal Holocaust. While the aforementioned cult classic presented its material in a similar style to this dreck, it had something this clearly doesn’t, mystery, intrigue, and, most importantly for a film like this, controversy. There was a time where it was extremely difficult to get a hold of a non-bootleg copy of Cannibal Holocaust, and getting a chance to see the film was seen almost as a privilege. The release of The Real Cannibal Holocaust aims to cash in by attempting to craft artwork with a similar, dangerous look and feel, along with a description that touches on similar verbiage that was used to market the film actually worth seeking out. Rest assured, The Real Cannibal Holocaust is not even remotely worth seeking out at all.

If One 7 Movies’ attempts to sell their film in a sort of backwards way weren’t bad enough, the film itself is just plain boring. Going into this expecting at least a few gruesomely entertaining, “realistic” sequences, it’s beyond disappointing to report that there’s not even much, if any, in the way of unentertaining, gruesome footage. There’s just no point to creating a movie like this, if it feels like a Papua, New Guinea travelogue crossed with a late night National Geographic special. Plus, there’s nothing that comes even close to replicating the cringe-inducing finale of the original Cannibal Holocaust, a true, pointless shame in itself. One 7 Movies’ DVD is almost as big of a mess as the film itself, beginning with a horrid video presentation. Sure, the footage is of the documentary variety, but that’s still no excuse for one of the most beat-up prints used for a DVD release in quite some time. The audio barely fares better, full of unwanted cracks and other flaws, and topping off this rather horrid release is a complete lack of supplemental material.