A visceral, first-person account of a young girl growing up in East Jerusalem as she confronts the effects of occupation and war in every corner of her life, Miralstars Screen Actors Guild Award® winner Freida Pinto (Slumdog Millionaire) in the title role, Hiam Abbass (The Visitor, Amreeka), and Willem Dafoe (Spider-Man, The English Patient). Based on the semi-autobiographical novel of the same name by Rula Jebreal. 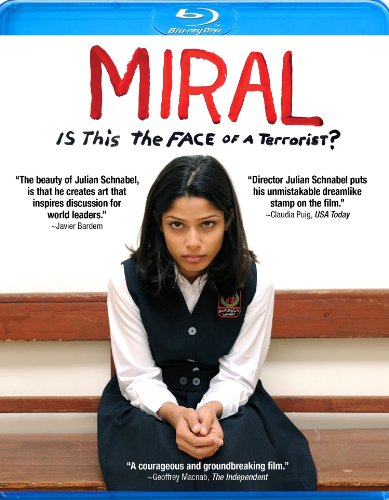 A visceral, first-person account of a young girl growing up in East Jerusalem as she confronts the effects of occupation and war in every corner of her life, Miral

is the story of a Palestinian girl coming of age amidst the war zone of the Israeli-Arab conflict — unflinchingly told through the perspective of Miral (Freida Pinto) herself. Following the death of her troubled mother, Miral's father (Alexander Siddig) is forced to entrust her to the orphanage of Hind Husseini (Hiam Abbass). Hind's commitment to peace through education has a profound impact on the maturing young woman, and Miral's epic journey to self-esteem and social consciousness proves both harrowing and hopeful.

Blu-ray™ and DVD bonus features include deleted scenes; "The Making of Miral" featurette; a Studio Tour with Julian Schnabel; a Filmmaker Q&A; and an Audio Commentary with director Julian Schnabel and producer Jon Kilik. Note: Special features are subject to change.

ABOUT THE WEINSTEIN COMPANY
The Weinstein Company (TWC) is a multimedia production and distribution company launched in October 2005 by Bob and Harvey Weinstein, the brothers who founded Miramax Films in 1979. TWC also encompasses Dimension Films, the genre label founded in 1993 by Bob Weinstein, which has released such popular franchises as SCREAM, SPY KIDS and SCARY MOVIE. Together TWC and Dimension Films have released a broad range of mainstream, genre and specialty films that have been commercial and critical successes, most recently Tom Hooper's THE KING'S SPEECH, winner of four 2011 Academy Awards®, including Best Picture; Derek Cianfrance's Academy Award®-nominated BLUE VALENTINE; John Wells' feature directorial debut, THE COMPANY MEN; MIRAL and SCRE4M. Since 2005, TWC and Dimension Films have released such films as GRINDHOUSE; I'M NOT THERE; THE GREAT DEBATERS; VICKY CRISTINA BARCELONA; THE READER; THE ROAD; HALLOWEEN; THE PAT TILLMAN STORY; PIRANHA 3D; INGLOURIOUS BASTERDS; A SINGLE MAN; and 2011 Golden Globe® Best Foreign Language Film nominee THE CONCERT. Upcoming releases include SPY KIDS 4, APOLLO 18, DIRTY GIRL, SUBMARINE, OUR IDIOT BROTHER, THE DETAILS, CORIOLANUS, MY WEEK WITH MARILYN and SO UNDERCOVER. Recently wrapping is I DON'T KNOW HOW SHE DOES IT. Currently in production is COGAN'S TRADE.

TWC is also active in television production, with credits including the Emmy® Award-winning hit reality series "Project Runway," and the critically acclaimed HBO comedy/crime series "The No. 1 Ladies Detective Agency." The company is producing two "Project Runway" spinoffs, "Project Runway: Masters" and "Project Runway: Accessories," which are expected to debut in 2011. The company currently has 15 series in different stages of development, including: "Mob Wives," a reality series for VH1; "Marco Polo," a scripted historical series about the great explorer; "The Nanny Diaries," based on the hit book; and "The Mad Ones," adapted from the Mafia novel of the same name.