“Have I intruded?” - Lily (Cathryn Harrison) 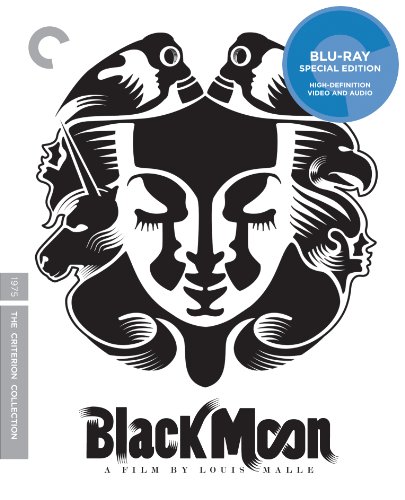 The great Louis Malle's most fasinating, spellbinding film finally gets it's due via this wonderful Blu-ray release from The Crierion Collection. I can't wait to see what an amazing job they've done with this one.

Late director Louis Malle is perhaps best known for films like Damage and Au Revoir Les Enfants; rather straight-forward, well-crafted dramas, that, nonetheless, told some extremely compelling stories. In 1975’s Black Moon, Malle took a step in a different, much more surreal direction. For this wholly original masterpiece, Malle collaborated on the story with Joyce Buńuel, the daughter-in-law of the late, great Louis Buńuel, a master of surrealist cinema, to say the least. The winner of a pair of Cesar Awards back in 1976, Black Moon makes its way to Blu-ray courtesy of The Criterion Collection, and they have (once again, unsurprisingly) turned a somewhat obscure film from a well-known director into a near-must-see event of a release. While slightly lacking in extras, at least volume-wise, this is still another banner effort from the best in the business.

The world is at war, and the combatants are men and women. These warring factions aren’t any specific group of men and women, mind you, just the entire population of the two sexes. In the middle of this inexplicable war is Lily (Cathryn Harrison), a young woman innocently driving in her car when she hits a skunk in the road, and is suddenly on the run, both literally and figuratively, from reality. She finds a safe haven in a house buried deep in the countryside that is seemingly only inhabited, at least initially, by an old, bed-ridden lady (Therese Giehse). Before long, Lily encounters Brother Lily (Joe Dallesandro) and Sister Lily (Alexandra Stewart), the house’s other inhabitants, who are a strange pair who often engage in swordplay. Frequent encounters with a talking brown unicorn only add to the weirdness that Lily experiences in and around this house, but it does provide a nice escape from the war around her.

This even-more-surreal, pseudo-stepbrother of Alice in Wonderland takes us (and Lily) on quite the journey. While I’m still partial to the ultra-surreal works of David Lynch (most-specifically, Mulholland Drive and Inland Empire), Malle does a fine job with Black Moon, especially considering his penchant for making far more linear films. It’s difficult to call the preceding paragraph a plot summary, since the entire film when laid out unsymbolically could be misconstrued as a compilation of random sequences with no clear cut directorial vision. On the contrary, Malle has a ton to say with each and every set piece, but to get to the core of the film’s multi- layered themes might require a bit of work on the audience’s part. Fortunately, if you have the time and patience to dissect the film (accomplished by simply watching it at least a couple of times), you’ll be rewarded with an extremely fulfilling experience that you’ll only want to recommend to any and all of your cinema-loving friends.

The opening titles contain a dedication to actress Therese Giehse, who passed away before the film was released. She does such a fine job as the bed-ridden old lady in the film, nearly stealing every scene that she shares with Cathryn Harrison. Still, Black Moon succeeds, in large part, due to Harrison’s wonderful performance, with difficult material to work with, to say the least. This is daring work on her part also, with the then-16-year-old Harrison baring her breasts on multiple occasions in the film, and not stopping there. Malle asks quite a lot from her, but, and if only in the name of surrealist cinema, she comes through in every instance, bringing even the slightest bit of gravity to a totally out-there film.

Criterion’s Blu-ray disc is far from their most impressive, at least on a total package level. Technically, it’s nearly as excellent as their releases for more recent movies, starting with a brand-new, 1080p high-definition transfer that presents the film in a 1.62:1 aspect ratio and was culled from the original 35mm negative. The images are exquisitely detailed, with solid contrast and black levels throughout, and colors are just as impressive. The audio is offered in two flavors: an English LPCM 1.0 mix and a French Dolby Digital 1.0 track, with optional English subtitles. Despite the lossless nature of the former, don’t expect much in the way of a dynamic audio experience with either track, but things sound natural at all times, with the film’s sparse dialogue always coming across crisply and clearly. The only area that comes up a little short, at least by Criterion Collection standards, is the supplemental features. Pour le cinema is virtually essential viewing once you’ve watched Black Moon at least once. It features Louis Malle, himself dissecting his own film as much as he possibly can, given its surreal nature. The only other extras are a stills gallery, the film’s original French theatrical trailer, and a great, 16-page booklet with Ginette Vincendeau’s essay, “Louis in Wonderland,” chronicling Malle and Black Moon.