“You know, according to the laws of probability, you drink a glass of water, you drink a piece of Napoleon’s crap.” - The Senator (Tony Curtis) 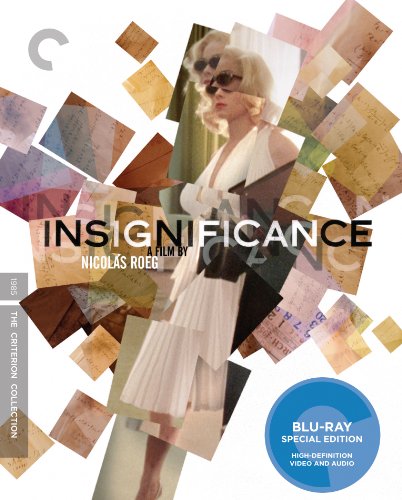 It's always great to see a Nicolas Roeg film for the first time, but it's even better when it stars Theresa Russell and is contained on a Criterion Collection Blu-ray disc.

There are very few actresses that I will stop what I’m doing for. Theresa Russell is one of that select group. Sure, she’s beautiful and extremely sexy, but she also has a screen presence that is tough to match. Most of my experience with Russell stems from her work in the 80’s films Black Widow and Physical Evidence, as well as the infamous, early-90s Ken Russell flick, the NC-17-rated, Whore. She also played an unforgettable role in the ultra-twisty, underrated gem, Wild Things in 1998, and most recently has appeared in Spider-Man 3 and an episode of Fringe. It’s been only recently, and, thanks in large part to The Criterion Collection, that I’ve been able to go back and see some of Theresa Russell’s earlier films, like 1980’s Bad Timing: A Sensual Obsession and the just-released 1985 film, Insignificance, both of which were directed by her then-husband, Nicolas Roeg (Don’t Look Now, The Man Who Fell to Earth). For those unfamiliar with Russell, this new, great Blu-ray release of Insignificance is a great way to become acclimated, with excellent audio and video presentations, as well as some interesting extras, not to mention the opportunity to watch her prance around looking like Marilyn Monroe throughout the film, low-cut white dress and all.

An unnamed Actress (Russell) has just finished a long shoot, culminating in a scene where she stands over a subway grate, and has her white dress blown up, nearly above her head. This isn’t where the Actress’ resemblance to Marilyn Monroe stops, though, and as she eventually makes her way to a hotel, she knocks on a door and encounters an aging Professor (Michael Emil), who looks an awful lot like Albert Einstein. Unbeknownst to the Actress, a Senator (Tony Curtis) that resembles Joe McCarthy has been attempting to coerce the Professor to testify before a committee. The Actress and Professor spend the evening discussing their respective theories on topics regarding time, relativity, and even more complex issues. The problem is that both parties have a hard time understanding one another, for various reasons. Things get even more complicated when a Ballplayer (Gary Busey) that could easily pass for Joe DiMaggio, shows up, urging the Actress to come home with him.

Plenty of films and/or TV shows tackle the concept of an alternate universe/reality, to the point where it’s almost become a cliché. On the surface, that might seem like the direction that Roeg is taking with Insignificance, but, in actuality he’s doing something much more surreal and wholly original. He’s using characters that are the spitting image of legendary “real” people, and putting them together in a setting that places such complicated matters on such seemingly simple terms. Roeg’s intentions are tough to figure out for much of the first half of the film, as the audience is distracted, right off the bat, by these characters and their striking resemblances to Monroe, Einstein, etc, but his film’s glorious finale brings everything into focus, while still allowing us to draw our own conclusions about things. This is one of Roeg’s more obscure films, yet it’s also one of his most accomplished, and here’s hoping this Criterion release kills the “obscure” moniker very soon.

Which brings us to the main reason I sought out Insignificance to begin with, the aforementioned Theresa Russell. It came as no surprise to me that Russell is better than ever here, as she takes a role that could have easily made her look like a total ditz that’s simply mimicking Marilyn Monroe, and turns it into something that’s truly remarkable. Instead of mimicry, this performance is more of an homage to Monroe, but, even more impressively, Russell’s Actress comes across as almost a scholar on a similar wavelength to the Professor at times. Insignificance is much more than an excuse to watch Theresa Russell wear Marilyn Monroe’s famous low cut white dress (and oh boy does she EVER wear that dress!), it’s an opportunity to witness one of the best performances of Russell’s career.

Praising The Criterion Collection’s Blu-ray discs is almost becoming redundant at this point, but, low and behold, they’ve put out another exceptional release with Insignificance on Blu-ray. The greatness starts with a brand- spanking’-new 1080p transfer that was approved by both Nicolas Roeg and producer Jeremy Thomas. With a 1.78:1 aspect ratio, this presentation excels on every level, featuring crisp, detailed images, sharp colors, and natural flesh tones throughout, while it’s clear that any grain, dirt, and other debris has been removed from the source material. The audio is the film’s original mono track, but it’s presented here as an LPCM 1.0 mix. Despite the lack of dynamic audio elements, things sound quite good, with the amazing score always blending in nicely with crystal- clear dialogue. The extras consist of a trio of behind-the-scenes segments that do a great job of shedding some light on what Roeg was trying to accomplish with Insignificance, the original trailer for the film, and a great, 24-page booklet that offers even more insight into this exceptional piece of filmmaking.