“He cut deep into the pain of jealousy. Someone with so many fantasies…it’s an illness.” - Catherine Allégret 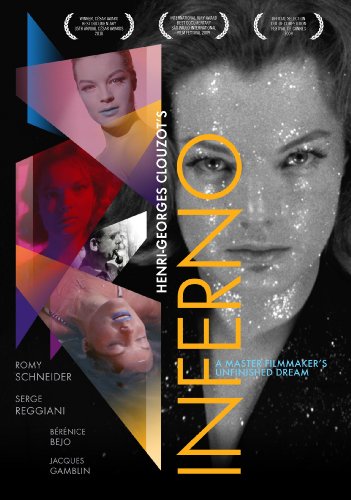 Given that this film began shooting almost 50 years ago is intriguing enough. Flicker Alley has upped the ante by including a second disc of supplementary material that allows us to study this compelling project long after the film itself is over.

Back in 1964, director Henri-Georges Clouzot made a film that never was. An extremely accomplished director at the time, thanks to excellent films like Diabolique, The Wages of Fear, and Le Corbeau: The Raven, Clouzot had everything lined up to add Inferno to that incredible list. He had his small budget increased immensely once the studio got a look at some of the great footage he initially shot, a stellar pair of lead actors in Romy Schneider (The Trial) and Serge Reggiani (Army of Shadows), and what many considered to be a groundbreaking screenplay. Unfortunately, things went very awry when Clouzot began driving everyone on the set crazy with unexplained long shooting schedules and numerous other idiosyncrasies, causing the production to eventually shut down and the film remain unfinished. 45 years later, filmmakers Serge Bromberg and Ruxandra Medrea crafted the documentary Henri-George Clouzot’s Inferno, a chronicle of the production of Clouzot’s incomplete film, with some amazing new surprises interspersed with the interview and on-set footage.

The plot of Clouzot’s film centers on Odette (Schneider), the cheating wife of Marcel (Reggiani), her eternally jealous husband. Marcel’s jealousy leads to insanity, with his possible misconceptions of his wife’s malfeasance leading his mind to craft demons that not only threaten the existence of his marriage, but his, and Odette’s lives. While this exciting concept could have resulted in a phenomenal, trippy film, it only led to a collection of footage that was never used as a final product, let alone seen by anyone outside of the Clouzot family. Until now, that is, as Bromberg and Medrea, working as relative partners with Inčs, Clouzot’s widow, have essentially finished his film. Their version of Inferno consists of standard documentary fare, like (new) interviews, a look at original storyboards and director notes, and, most impressively of all, re-enactments that also serve to fill in some unfilmed blanks.

These re-enactments are what drive Henri-George Clouzot’s Inferno, as they use current actors to embody the roles originally owned by the late Schneider and Reggiani. Bérénice Bejo (currently wowing international audiences in The Artist) plays Odette and Jacques Gamblin (The Names of Love) is Marcel, and the two actors do a phenomenal job shooting scenes that Clouzot drew up in his screenplay and storyboards, but was never able to put on film. These amazing sequences are seamlessly worked into the rest of Bromberg and Medrea’s film, perfectly complementing interview footage with those who were on Clouzot’s set while he was shooting his film. We hear from art director Jacques Douy, effects master Eric Duvivier, William Lubtchansky, a camera operator, as well as assistant directors Bernard Stora, and Costa-Gavras, but the most touching interview involves Inčs, a truly engaging woman who gives us great insight into both Clouzot the filmmaker, and Clouzot the man.

This award-winning film (including the 2010 César Award for Best Documentary), wouldn’t be the same without the inclusion of both the aforementioned re-enactments, and the unveiling of the previously unseen footage that Clouzot managed to shoot. Getting a glimpse of his psychedelic, extremely interesting vision leaves one with the mixed emotions of excitement and sorrow that the film was never wholly realized. Sure, Clouzot is apparently mostly responsible for its downfall, but that doesn’t change the fact that this could have been an unforgettable cinematic experience. Fortunately, and thanks to Bromberg and Medrea, Henri-George Clouzot’s Inferno is just such an experience that is wonderfully presented on Blu-ray by Flicker Alley. This is a 2-disc set, with a Blu-ray dedicated to the feature film, as well as an introduction by director Serge Bromberg, an image gallery, and They Saw Inferno, the crown jewel of the extras. This piece is essentially a documentary about another documentary, in that it chronicles the making of Henri-George Clouzot’s Inferno, by going the more traditional route of using almost all interview footage to tell its story. There’s a DVD also included in this package, which also houses the feature film, and only has the Bromberg interdiction along for the ride as an extra feature.