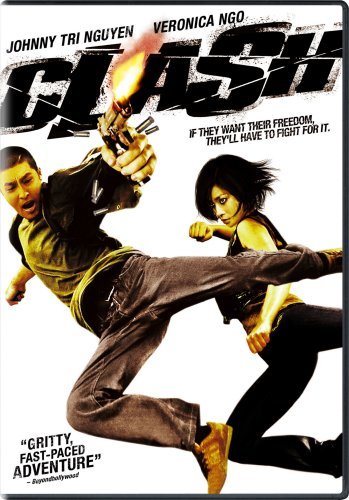 LOS ANGELES, CA (July XX, 2011) – From Indomina Releasing comes an action-packed, martial arts thrill-ride like no other as the heart-pounding film Clash

hits DVD on August 9, 2011. The blockbuster duo of Johnny Tri Nguyen (Spiderman, Spiderman 2 and X-Men: First Class stuntman) and Veronica Ngô reteam in what is, to date, one of Vietnam's top-grossing action hits. Distributed by Vivendi Entertainment, Clash

Originally paired in Vietnam's highest grossing film of all time, The Rebel, Johnny Tri Nguyen and Veronica Ngô reunite for this eagerly awaited martial arts tour de force as mercenaries on a mission to prevent the keys to Vietnam's one and only satellite from being given to the Chinese Triad. Tensions run high as they are forced to determine each other's motivations and decide if they can trust each other.

Trinh (Veronica Ngo) is a mercenary working for Hắc Long (Hoàng Phúc), an elusive criminal mastermind, who seeks a hard drive that controls the VINASAT.1, Vietnam's first and only satellite. Hac has kidnapped Trinh's daughter to get her to do his bidding and now she must give him what he wants so she can get her daughter back.

Trinh assembles a team of mercenaries and ex-convicts, including Quan (Johnny Tri Nguuyen), to recover the hard drive, but just as the mission is about to succeed, Trinh and her team are betrayed by one of their own and the hard drive falls into the wrong hands. Desperate to save her daughter, Trinh must hunt down the traitor before the hard drive is lost, but can she trust the remaining members of her crew?

The Indomina Group is a vertically integrated independent studio launched in 2008 by Co-Chairman and CEO Jasbinder Singh Mann. Operating in Los Angeles and the Dominican Republic, Indomina takes a transmedia approach to collaborating with content creators around the world to bring innovative entertainment properties to the market. The company's global operations include the production and distribution of motion pictures, television, music, interactive games, and the ownership of world-class studio facilities and production services. For more information please visit www.indomina.com

For more information about Clash