“Right, let’s get this harvest on!” - Chris (Ewan McGregor) 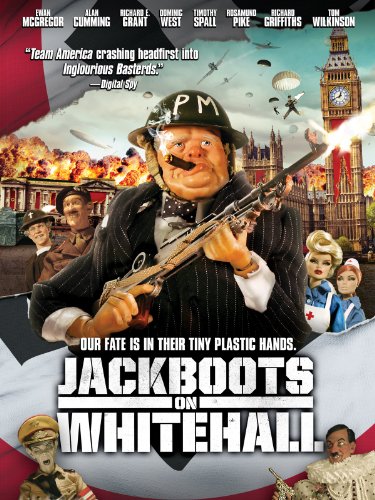 Really, all there is to know about this going in is that it's a British political satire that uses puppets to tell it's story. Eat your heart out, Matt Stone and Trey Parker!

Over the years there have been plenty of farcical takes on war. From Dr. Strangelove to the Hot Shots! films, writers have tried numerous times to inject at least some humor into what is an inherently bleak, and tragic subject. When it comes to war farces filmed using puppets, though, the quintessential film is undoubtedly 2004’s Team America – World Police, from the warped minds of South Park creators Trey Parker and Matt Stone. It’s also one of the few puppet-based war farces, yet, despite it being the best, that hasn’t stopped British directors (and brothers) Edward and Rory McHenry from throwing their hats in this rather specialized cinematic ring with 2010’s Jackboots On Whitehall. This relatively obscure take on World War II hits U.S. shores via New Video’s Flatiron Film Company releasing wing, and, although the film leaves us yearning for many more laughs, the disc itself is a solid enough effort.

The focal point is Skywalker-ian farm boy Chris (voiced by Ewan McGregor), who, it is established early on, has giant hands (blatant foreshadowing?). These huge appendages have branded Chris as an outcast in town, but he’s done settling for such a status. Instead, he signs up to help none other than Winston Churchill (Timothy Spall) escape the clutches of Adolph Hitler (Alan Cumming), whose kidnapping plan and subsequent plans for attack also are getting in the way of Chris’ attempts to woo the beautiful Daisy (Rosamund Pike). Putting a plan in motion, Chris heads to Scotland with an American pilot named Simon (Dominic West), a bevy of troops, and a few surprising, yet famous supporters, who join the cause (and a fight for “freedom!”) along the way.

I hate to be the bearer of bad news, but be prepared to lower your Team America-triggered high expectations before sitting down with Jackboots On Whitehall. Unfortunately, there’s not even a speck of the same creativity, originality, and just plain laughs that the Parker/Stone film sported throughout its running time. Sure, the McHenry brothers do manage a few laughs here and there, but these are way too few and far between to make things interesting. The awesome collection of vocal talent turns out to be more of a hindrance than anything, as we’re left reacting to these relatively big names voicing puppets, rather than simply connecting the voices to the characters. Of course, the characters are so thinly realized that it would be difficult to truly connect with them, regardless, but there was just a magic in hearing Stone and Parker provide most of the voices in their film, rather than A-listers like Ewan McGregor coming across as Obi-Wan Chris at times.

Despite the relative lack of comedy, Jackboots On Whitehall is a joy to watch, for the puppetry alone. It’s pretty amazing how they can make this all come together, from the detailed puppets themselves, to some amazingly elaborate-looking World War II battle site recreations. Everything moves so fluidly as well, and, while you’ll never forget that you’re actually watching puppets, the realism can be pretty startling at times. It’s just a shame that everything couldn’t come together here, given the intriguing premise and enough time in-between puppet-based farces for this to seem like a fresh idea…if only it had worked. There’s nothing spectacular about New Video’s DVD presentation either. The anamorphic widescreen image features solid color reproduction and detailed images throughout, but nothing really eye-popping. A Dolby Digital 5.1 audio mix is offered as well, but it doesn’t make much use of directional effects, and isn’t as dynamic as one would hope. Quite a few extras are on board, but they’re mostly fluff pieces, with only a few clips offering interesting insight into the puppetry and other aspects of making Jackboots On Whitehall.