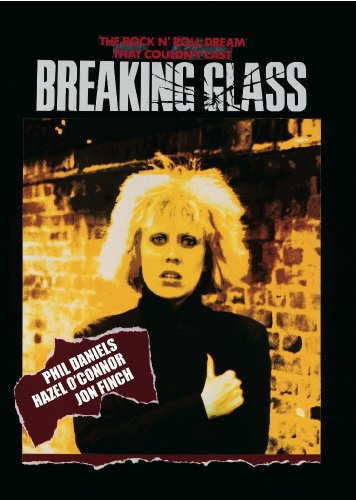 With a cover that screams Glam Rock-era David Bowie, this flick promises to be a real treat. Having only heard of this sparingly through the years, it's great that Olive Films have finally made it widely available for the music-loving masses.

The movie musical resurgence that peaked when Chicago won the Best Picture Oscar in 2002 petered out rather quickly. While there hadn’t been that many films of its type released in such a short time in decades, musicals have always had a place on most movie studios’ schedules at least at some point in a given year. 1980 was a period when Punk music was giving way to New Wave, an awkward transition that was chronicled in the film Breaking Glass. Directed by Brian Gibson (also responsible for the similar-themed What’s Love Got to Do With It? and Still Crazy, along with the totally dissimilar Poltergeist II: The Other Side), Breaking Glass has remained mired in obscurity in the 30+ years following its release. Thanks to the great Olive Films, a relatively young DVD distributor responsible for rescuing such little-seen flicks, this important era in music history can now be revisited in the comforts of your own home.

Kate (Hazel O’Conner) is the lead singer of a small, fledgling band named Breaking Glass. Struggling to make ends meet, Kate and the boys take any gig they can get in the seedy bars of England, circa 1980. It doesn’t help that they’re caught in the middle of the music scene transition from punk to new wave, and not having a solid future lined up anywhere in the industry, let alone a manager, isn’t helping matters. Enter Danny (Phil Daniels), a (relatively unsuccessful in his own right) record company employee, who begins to serve as a pseudo-manager for Breaking Glass, and actually landing them some higher-profile gigs and time in a recording studio. He even convinces Kate to hire a new group of musicians, including Ken (Jonathan Pryce) on saxophone, Tony (Mark Wingett) on guitar, Dave (Gary Tibbs) on bass, and Mick (Peter-Hugo Daly) on drums. It isn’t long before a sleazy producer named Woods (Jon Finch) has hands on the band, Danny is on the outside looking in, and Kate must choose what’s more important, success or her musical soul.

Despite the edgy music and performances, Breaking Glass, in essence, is a typical rags-to-(almost) riches tale. All of the conventions of similar fare that both came before and have come since are there, from the fledgling, yet highly talented underdog rising to the top, to the inevitable rift between said underdog and the person who made sacrifices to ensure that such talent would be realized by the right people. Still, despite these borderline clichés, everything about the film works. The most engaging aspect of Breaking Glass is the music, however, as it chronicles an era during which such eclectic, far-from-mainstream fare was not only more prominent in the overall popular culture landscape, but such popularity was even encouraged. Look no further than the fact that the film was released by Paramount Pictures. Today, a movie centering on such edgy, daring tunes would absolutely have to be released independently. It would never have a chance at a big Hollywood studio without Justin Beiber or the cast of Glee ruining it in at least some capacity. It’s crazy to think how much has changed on this front in 30 years.

The incredible finale involves a final, show-stopping performance, and this excellent setpiece is both surreal, and extremely creepy. With costumes that could have been stolen off of the Tron set, (and had to be an influence for Lady Gags’s on-stage antics) the final 10 minutes or so deliver on many levels. Not only is the final song superb and unforgettable, but it brings the film to a close in an oddly, yet extremely effective, abrupt fashion that basically left me a little stunned, and, admittedly shaken for a bit. Despite the effectiveness of the preceeding 80 minutes, I really wasn’t prepared to have that reaction, and the film worked more for me because of it. Hazel O’Conner is also a huge reason as to why Breaking Glass works, as her amazing voice is complimented quite nicely by her acting skills. While she’s faded off into obscurity through the years, she enjoyed quite a bit of success around the release of this film, even headling a tour during which Duran Duran opened for her. Now that Olive Films have brought Breaking Glass (and O’Conner) back into the limelight via this DVD release (a technically sound effort with, sadly, no extras), here’s hoping a bunch of pure music fans will jump on board a new bandwagon for a film that’s more than deserving of one.