"There's a joy known to all who share the sky." - narrator (Tom Selleck) 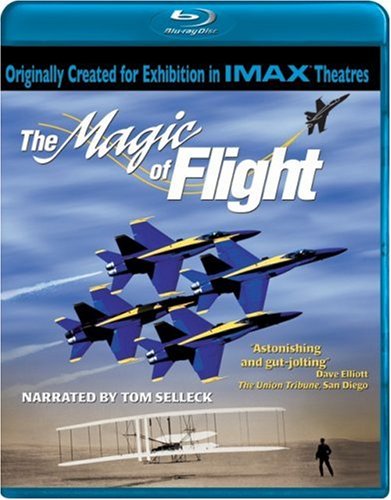 A Blu-Ray disc on the "magic of flight" should probably include a free barf bag. This one, however, does not.

Image continues to provide Blu-Ray releases for all of the previously-issued-on-SD titles in the MacGillivray-Freeman/IMAX series. This 1996 short film&#8212directed by Greg MacGillivray&#8212attempts to link man's fascination with birds to our own need to take to the air ourselves. And amidst some majestic scenes of birds in flight to set the mood, the real meat-and-potatoes of this IMAX production is showcased with the dizzying work of The Blue Angels. MacGillivray captures some remarkable footage, with cameras specially-mounted in unusual places, and it is something to behold. <br><br> The problem is that with just a 39 minutes runtime (typical for the MacGillivray-Freeman titles), there is not a whole heck of a lot of time to waste on anything that's not jaw dropping. The IMAX presentation&#8212even when viewed on comparatively smaller 50" screen&#8212is such an overwhelming visual experience that when MacGillivray sidesteps with what seems like overly long pilot interviews and a resoundingly dull history of flight that all it does it limit our chances of being wowed by some stunning aerial film work. <br><br> And it's not like <b>The Magic of Flight</b> doesn't have its share of visual brilliance, whether it be The Blue Angels, the vertical-lifting harriers, death-defying stunt pilots or some nail-biting aircraft carrier landings. This is clearly where MacGillivray and his team are most comfortable, putting their cameras where they seemingly shouldn't be to give us a chance to see things most of us will never witness. <br><br> That's all good stuff&#8212no question about it. But it's packaged with some incredibly dumbed-down narration from Tom Selleck that overstates the obvious in childishly broad terms, all atop a bed of what could be the most distractingly annoying "country" soundtrack I've had the displeasure of having to endure. <br><br> It's educational, I guess, to learn about pitch, yaw and roll and get a grade school Wright Brothers synopsis, but what we all really want out of these IMAX titles is to constantly amazed for 40 minutes or so. As expected, <b>The Magic of Flight</b> does have its moments of impressive in-flight cinematography, but far too much time is spent with the mundanely dull (do we need to see pilots exercising?) or dabbling in lightweight sepia-toned history (the aforementioned obligatory Wright Brothers recap). <br><br> But when MacGillivray is in the air, this one is truly dizzying, and may have you reaching for a barf bag. <br><br> <b>IMAGE/AUDIO</b><br> The VC-1 encoded 1080p 1.78:1 transfer is far from the strongest entry in the MacGillivray-Freeman collection, marred as it is by some measurable shimmer, banding and edge enhancement at times. After the consistent beauty of discs like <b><a href="displayreview.php?ID=374">Amazon</a></b> and <b><a href="displayreview.php?ID=376">Journey Into Amazing Caves</a></b>, this one comes up short&#8212as one of the older titles in the series that may not be all that surprising, I suppose. Colors, however, are brilliant&#8212and though the transfer has a few imperfections&#8212there are sequences that look very striking, but just not enough overall to warrant excessive praise. <br><br> The primary audio track is delivered in DTS HD-MA 5.1, and easily makes up for the shortcomings on the video side. The encompassing presentation makes strong use of all channels, from a deep .LFE for the roar of Blue Angel jets to rears that carry flocks of birds. The flight sequences are where this mix gets to show off, not so much, however, during the cornpone twanginess of the ill-suited "country" score. Voices are clean at all times, most notably with Tom Selleck's syrupy narration, which has a warm, natural resonance. <br><br> A French Dolby Digital 5.1 surround dub is also included. <br><br> <b>EXTRAS</b><br> An SD "making of" (42m:54s) that runs longer than the main feature is presented in 1.33:1 fullframe. Too bad this one's in SD, because it's actually more fascinating than <b>The Magic of Flight</b> itself, with MacGillivray showing just how some of the aerial shots were done, and the difficulty in building special camera mounts and the like. <br><br> The good news is that an assortment of 13 additional 1080p MacGillivray Freeman trailers appear here, and these previews are a globehopping set of travelogues, from the Alps to Greece to oceans to caves. A <i>History of MacGillivray Freeman Films</i> (07m:37s) covers the company's 40-year history of filmmaking, and serves as a teaser of sorts for their other similar titles, while onscreen text also provides a bio on Greg MacGillivray. Also provided is an onscreen flight trivia game designed to see how much you knowledge you've retained. The disc is also BD-Live ready, though content appears to be limited to additional trailers. </p><p class="credit" align="right">Rich Rosell May 10, 2009, 6:44 am</p></p></div> </div> </section> <footer><p class="foot"><a href="ducu.php">Home</a> | <a href="r-reviews.php">Review Vault</a> | <a href="r-inteviews.php">Interviews</a> | <a href="r-articles.php">Articles</a> | <a href="r-apps.php">Apps</a> | <a href="r-about.php">About</a> | <a href="mailto:webmaster@digitallyobsessed.com">Contact</a></p> <div id="botad" align="center"> </div> <div id="copyright">&copy; Copyright 1999-2019<div> </footer></div> <script type='text/javascript'>var _merchantSettings=_merchantSettings || [];_merchantSettings.push(['AT', '11l8pS']);(function(){var autolink=document.createElement('script');autolink.type='text/javascript';autolink.async=true; autolink.src= ('https:' == document.location.protocol) ? 'https://autolinkmaker.itunes.apple.com/js/itunes_autolinkmaker.js' : 'http://autolinkmaker.itunes.apple.com/js/itunes_autolinkmaker.js';var s=document.getElementsByTagName('script')[0];s.parentNode.insertBefore(autolink, s);})();</script> </body> <script>'undefined'=== typeof _trfq || (window._trfq = []);'undefined'=== typeof _trfd && (window._trfd=[]),_trfd.push({'tccl.baseHost':'secureserver.net'},{'ap':'cpsh'},{'server':'p3plcpnl0694'},{'dcenter':'p3'},{'id':'808962'}) // Monitoring performance to make your website faster. If you want to opt-out, please contact web hosting support.</script><script src='https://img1.wsimg.com/traffic-assets/js/tccl.min.js'></script><script src='https://img1.wsimg.com/traffic-assets/js/tccl-tti.min.js' onload='window.tti.calculateTTI()'></script></html>