"Often the most dangerous part of exploring caves is getting to them." - Nancy Aulenbach 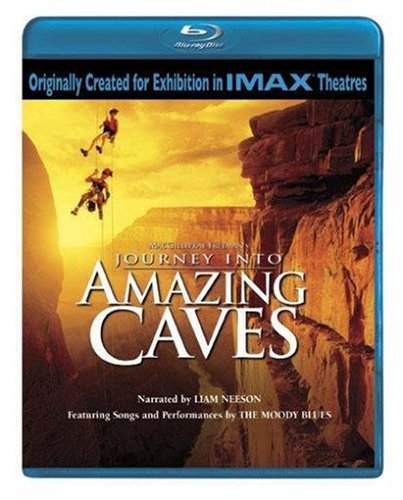 Director Steve Judson ascended the heights of our planet in 1998 with the IMAX film Everest (he was one of three directors on that film), and in this 2001 IMAX feature Judson and his cameras descend inward. Way inward.

As the title indicates, this time it's caves, and this latest Blu-Ray release in the celebrated MacGillivray-Freeman series of travelogue short films spans the globe to show us comfy couch potatoes just what lurks beneath our feet. As with the other titles in the catalog, Journey Into Amazing Caves is part documentary/part scripted adventure/part message film, and though perhaps those elements seem like a dangerous mish-mash the MacGillivray-Freeman folks have an effective way of weaving it together.

Here we follow a pair of intrepid cavers/researchers, Nancy Aulenbach and Dr. Hazel Barton, on their quest for rare microorganisms referred to as "extremophiles" which they feel may one day help find cures for diseases. These extremophiles are tough to find, and Aulenbach and Barton need to travel to Arizona, Georgia, the Yucatan and the Arctic, all in 39 minutes.

It's a bit of a whirlwind tour, but the particulars of the adventures are as diverse as the locales, and naturally the appeal of these types of films is the IMAX cinematography. While home viewing can never match the IMAX theater experience, Judson certainly doesn't disappoint, and in one of the film's most memorable visuals a shot begins on a climber suspended on a rope, only to have the camera quickly pull back to reveal the individual is suspended between a pair of distant peaks, high above a deep canyon. It's a genuine "wow" moment, in a short film that has a number of them.

And as breathtaking as that scene is, things really excel when Aulenbach and Barton head to the Arctic to go 500 feet down into an ice cave, which according to them is a "databank" of information. They hook up with a French team, and the harsh conditions on the surface are nothing compared to what awaits them underground. There, it's like an icy blue alien landscape, some sort of crystalline world full of creaks and groans as the ice is in constant motion, making the descent all the more dangerous. The cinematography is phenomenal, and Judson captures shots that seem impossibly dangerous.

It's not all caving, as there's some insane whitewater kayaking (necessary to reach some of the remote locations), including some kayak-over-waterfalls sequences that are reinforces the notion that I will never ever come close to being an extreme caver like Aulenbach or Barton. Ditto for the cavediving, referred to here as "the most dangerous adventure in the world", a statement that after viewing this disc I will not argue in the slightest. This is basically swimming through flooded underground caverns, some so narrow it requires removing one's oxygen tank and sliding it through first, all the while unspooling a thin line so that the cavedivers can find their way back. That is, if their oxygen doesn't run out.

Journey Into Amazing Caves seems less obviously scripted than some of the other MacGillivray-Freeman titles, though bits like Aulenbach periodically communicating to her 2nd grade classroom via the web seems staged, it does serve a purpose to present dumbed-down information to us non-cavers types. And it gives us a chance to catch our breath before the next descent.

IMAGE/AUDIO
Issued in a 1.78:1 transfer via a VC-1 encode, Journey Into Amazing Caves is yet another feather in the cap of the burgeoning Image Blu-Ray line. Just an absolutely beautiful looking disc, with excellent color depth and saturation balanced by deep, solid blacks. It's one thing to be wowed by the level of detail in the daylight climbing scenes in the Arizona desert, but it is the sequences in the naturally dark ice caves that carry an even more impressive degree of clarity, from the chips of ice to the reflections of the cold blue of the ice walls. This is likely one of the best image transfers in the entire IMAX series to date.

The DTS HD-MA 5.1 audio is a moderately aggressive mix, and a marked improvement over the 2002 SD release. Voice clarity of the climbers remains crisp, with Liam Neeson's narration coming across with a modest bottom end that makes his voice sound especially authoritative. Surrounds get utilized frequently, as in the ice caves, to give viewers that "you are there" sensation, and the unexpected weirdness of The Moody Blues score (that's who I think of when I think of cave exploring) even manages to sound pleasantly rich. French and Spanish dubs are included in Dolby Digital 5.1 surround.

EXTRAS
An SD "making of" (40m:31s) that runs longer than the main feature is presented in 1.33:1 fullframe, and though unfortunately not in HD, it is still an interesting look at how these remarkable films are put together. We learn that director Judson considers this a sequel of sorts to Everest, but the groovy stuff is the reveals of just how complex shooting some of the sequences were. In particular, the space-cam equipped helicopter which does the dramatic pull away shot of a climber suspended between two high cliff walls is worth the price of admission.

An assortment of 13 additional 1080p MacGillivray Freeman trailers is regular extra in this series, and these previews are a globehopping set of travelogues, from the Alps to Greece to oceans to caves. A History of MacGillivray Freeman Films (07m:37s) covers the company's 40-year history of filmmaking, and serves as a teaser of sorts for their other similar titles, while onscreen text also provides a bio on Greg MacGillivray. Also provided is an onscreen Amazing Caves trivia game designed to see how much you knowledge you've retained. The disc is also BD-Live ready, though content appears to be limited to additional trailers.