“Strangest voice I ever heard…sort of like a duck?” - Mrs. Weissburger (Babette New) 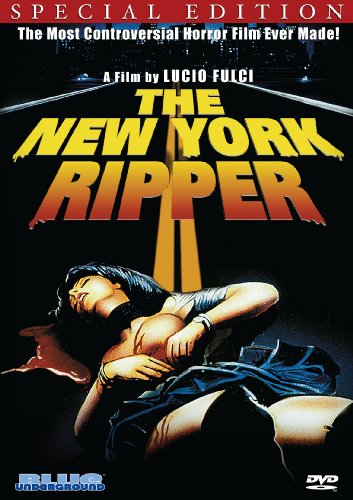 Italian exploitation master took a step away from the supernatural for this rather standard (relatively speaking) serial killer flick. He didn't, however, tone down on the sex, violence, and, most importantly, gore.

New York City has certainly been depicted in a fair share of films throughout the years, but I’m sure the city’s travel experts don’t exactly see 1982’s The New York Ripper as an ideal way to attract tourists to The Big Apple. This effort from Italian gore master Lucio Fulci has gained a cult following over the years, but it’s also not unanimously considered to be among his best efforts. Such distinctions are usually reserved for his more horror- tinged pictures like City of the Living Dead and The Beyond, which are also a wider-known globally. Still, The New York Ripper has enough of a following to warrant a Special Edition release from Blue Underground, and I’m happy to report that it is easily the best the film has ever looked or sounded.

Near Times Square in New York City, a killer is on the loose. This killer isn’t happy with simply carving women up, as he (or she) continually calls the police in a disguised voice to simply taunt them and their inability to catch him. Lt. Fred Williams (Jack Hedley) is heading up the case, and, while he remains determined to catch the killer, he’s far from perfect himself, often shacking up with a prostitute for comfort. Lt. Williams isn’t above doing anything to find a clue, often pushing the boundaries between what is right and what is morally reprehensible. Still, the only way to keep these lovely young ladies from meeting a horrible, untimely death, is if this crazed killer is stopped at any cost.

Knowing that The New York Ripper is a Lucio Fulci film going in should give you an excellent idea of what to expect as far as look, feel, and gory body count goes. We’re expecting a blend of genres, but given the basic plot, the absence of zombies or other supernatural forces that often reside in a Fulci film isn’t surprising. Still, Fulci does bring along the giallo feel from his other features, and he doesn’t do much to hide the film’s exploitative feel either. However, upon subsequent viewings, there does seem to be deeper, more involved meanings and themes in play here. For starters, the film appears to be a testament to the seediness of Times Square in the early 80s. While today, the rampant prostitution and pornographic theaters are gone, they defined Times Square back then, and rarely has such an era been captured as realistically as it is here.

Fulci fans, don’t be scared into thinking this is some kindler, gentler version of your beloved filmmaker though. There’s still plenty of what’s given Fulci the cult following he still enjoys today on display in The New York Ripper, with various body parts lying where they don’t belong and plenty of the red stuff on display as well. And never has the red stuff looked as good as it does in this new, Special Edition DVD release, as the 2.35:1 anamorphic widescreen presentation is a beautiful sight to behold. The transfer is full of crisp, crystal clear images, with excellent color rendering throughout and very few instances of dirt or other print defects. The audio is available in a few flavors, namely, 6.1 DTS-ES, 5.1 Dolby Digital Surround EX, and the original Mono track. All three are great, with the DTS and DD mixes providing a fuller, more robust experience, naturally, but purists will be more than happy with the nuances of the Mono mix as well. As far as extras go, there’s only a handful, but they’re well worth a look. They include an interview with actress Zora Kerova, a short comparison sequence chronicling the past and present states of the New York City locations in the film, and the original theatrical trailer for The New York Ripper, which is pretty fascinating to watch. There’s very little doubt that Fulci and exploitation film fans in general shouldn’t waste anymore time picking up this Special Edition DVD release.