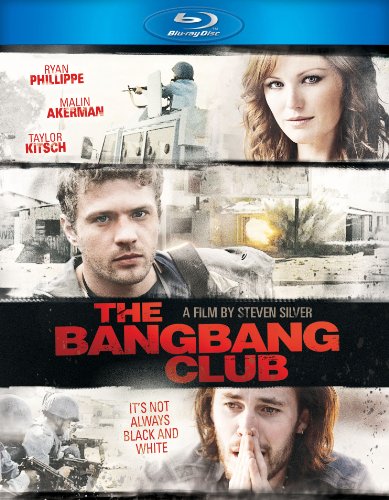 This certainly isn't the fist apartheid drama we've ever seen, but an interesting cast and decent film festival pedigree ramps up the optimism quite a bit.

It’s strange to me when the ups and downs of an actor’s career path basically emulate their personal life, although I’m not sure I should be so surprised when such a thing happens. Still, movie stars carry this air of invincibility around them, in that we tend to think their stardom can never be affected by anything other than poor box office receipts. A near perfect example of this is Ryan Phillippe, who became a star in his early twenties thanks to starring roles in the high-profile films I Know What You Did Last Summer, 54, and Cruel Intentions. Things seemed to change right around the time he married Reese Witherspoon, whom he’d met while filming Cruel Intentions. The strange thing about Phillippe is that the quality of his roles started to diminish even before he and Witherspoon tied the knot, as his career took an instant backseat to hers, which took off thanks to the huge success of Legally Blonde. Now, it seems Phillippe is staging a mini-comeback, taking supporting roles in MacGruber and The Lincoln Lawyer to name a few. 2010’s The Bang Bang Club sees Phillippe return to more of a starring role, but the film never received a wide theatrical release, and has gone virtually unheard of until this, Entertainment One’s Blu-ray release. We’ll see if this fine release is the spark that he needs to get back on the Hollywood map.

Greg Marinovich (Phillippe), Kevin Carter (Taylor Kitsch), Ken Oosterbroek (Frank Rautenbach), and Joăo Silva (Neels Van Jaarsveld) are involved in the epitome of a dangerous career. They comprise a group of war photographers in post-apartheid South Africa that call themselves The Bang Bang Club, and will stop at nothing to outdo each other in capturing the most graphic footage possible. Marinovich is new to the group, and it isn’t long after his induction that he’s having an affair with a beautiful editor named Robin Comely (Malin Akerman). With the group’s camaraderie often questioned in the face of danger and strenuous relationships, it’s a constant struggle to keep The Bang Bang Club together and firing on all cylinders.

By no means the quintessential film about war photographers (see James Woods in Oliver Stone’s Salvador for that), The Bang Bang Club is still an hour and a half of solid, and at times, gruesome cinema. This gruesomeness is the most engaging part of the film, as the actors get extremely close to numerous cold-blooded murders, but it’s not just the blood and gore that holds our attention. It’s the emotional and moral struggle that we go through with the characters during these murders. Should they intervene and risk their chance at an incredible photo, let alone their lives, or should they simply go with the flow of this deplorable time in South Africa’s history? The film might have worked a bit more if this question and similar dynamics had been delved into more deeply, but there’s enough approached here to keep things interesting. The sequences that don’t involve this dangerous photography nearly brings the film to a halt though, and it’s likely this imbalance that has kept it from a wider audience.

Phillippe gives a solid performance as the newest addition to this group of photographers, but he often struggles with his European accent. He does all he can to keep it from slipping throughout the film, but far too often do we hear the American Ryan Phillippe that we know and love and not the South African Greg Marinovich as intended. I didn’t expect to focus this much on horrendous accents, but Malin Akerman barely fares better than Phillippe in that department. They’re both incredibly distracting, but, fortunately, Kitsch does a much better job with his, often saving his colleagues from utterly disastrous sequences. The rest of the cast goes generally unnoticed, and with Phillippe’s and Ackerman’s issues, their ambiguity is a plus.

Entertainment One’s Blu-ray disc is a nice release, especially when it comes to the audio and video presentations. The video shows up as a 1080p transfer in 2.35:1, and it sports exquisite image clarity and an impressive, natural color scheme. Much of the film is shot in a way to give it a documentary feel, but things never falter, despite some often shaky camera techniques. The DTS-HD Master Audio 5.1 track is also well-done, making liberal use of the surround channels, and nice directional effects to capture even the most subtle of movements. Dialogue is always crisp and easy to understand, as its perfectly blended into the overall mix. A few nice extras are available, as well, including a commentary track with writer/director Steven Silver. He offers quite a bit of insight into the filming of some grotesque scenes, but the 45-minute making of piece that’s also here, does an even better job. There’s also a brief slideshow, some deleted scenes, and interviews with the cast and crew that were conducted by a child who played a small part in the film.