"There is always a clue." - Gil Grissom (William Petersen) 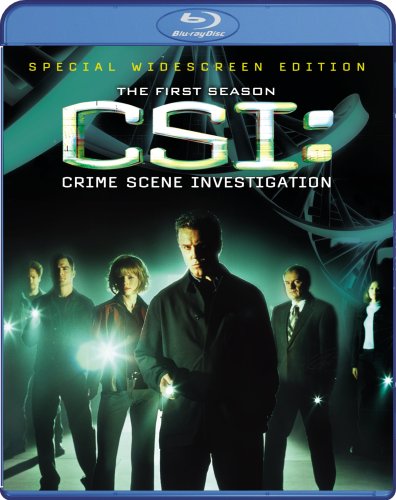 While nine years of crime scene investigation might be easy to take for granted, Paramount's Blu-ray release of the first year is a welcome reminder of the show's assured debut.

Itís hard to believe CSI is coming up on a decade. I remember tuning in to this first season like it was yesterday, thrilled to see an underrated actor like William Petersen back in the spotlight. His character, Gil Grissom, was a more refined version of his Manhunter persona, Will Graham without the career-reluctance. More than that, the showís premise was a nifty one. A flashy reworking of your basic ëwhodunití series, updated to showcase the most advanced in forensic technology, a show that wouldíve likely been chalked up as science fiction only a decade earlier. THE mystery series for the 21st century, itís easy to see why CSI captured the attention and appreciation of so many viewers early on in its run.

It wouldnít take more than three or four seasons before the formula started wearing a bit thin, but season one remains a stellar example of quality television. Before the writers felt like sweeping away the most realistic underpinnings of the series in favor of cartoon villains, recurring enemies and overbaked romances. It works best when Grissom and Co. are tackling a seemingly unsolvable crime and thatís why these twenty three episodes are a joy to watch. After all, the brand hadnít yet become a bloated parody of itself, with two spinoff shows and an even more unwelcome host of rip-offs (Iím looking at you, Bones!).

But Iím getting ahead of myself. Running through this Blu-ray set, I was amazed to discover how much I remembered about each of these episodes. Thereís a confidence here, in the character depth and development, and also in the construction of the mysteries, unparalleled for this genre. The pilot episode keeps viewers on their toes with a surprising twist ending that helps establish itself as a series sitting comfortably outside of convention.

And the pilot, while a solid gateway into this showís universe, is hardly among the list of standouts here. Boom, a personal story for CSI Nick Stokes (George Eads) involving a mysterious bombing and the subsequent murder of a prostitute. It's a strong contender for the best of year one thanks to an extremely clever storyline that keeps you guessing until the very end, and hefty amount of emotion, headed up by a fantastic performance by Eads. The first example of the show excelling at personal drama.

If I had to offer my personal favorite, Iíd go with the season finale, The Strip Strangler. It has all the elements: a diabolical killer who leaves no evidence behind, mounting tension between the FBIís interference with the case and a personal stake in things once Sara (Jorja Fox) lands herself on the psychoís radar. Thereís strong work from the cast here, but itís really the tight scripting by show creator Anthony E. Zuiker and Ann Donahue that distinguish this from its peers. Not only does the FBI/CSI clash help draw a line between this show and most other television dramas (studying forensics as opposed to obtaining a confession), but itís the perfect end to a strong rookie year. One which undoubtedly helped satiate appetites for a second season.

CSI works because thereís substance beneath the style. While it didnít capture my attention long-term (I stopped watching after season three), one needs to look no further than this handsome Blu-ray collection for understanding of its lasting appeal. Donít let the endless market of imitations dissuade you from checking out the original year. If you've got any interest, this set it recommended.

VIDEO:
The 1080i presentation presented on this disc looks excellent, despite a few setbacks. The good: you've never seen CSI looks so detailed (even on an HD broadcast). It's a colorful show by design, with the vibrant color scheme of Las Vegas setting your display on visual overload at times. The contrast against the inky blacks is mostly good, offering nice detail among the shadows. Flesh tones are equally strong and natural. But I have to point out that, while I was overall very pleased with this presentation, there are some flaws with the transfer. Mainly, but not limited to, occasional specs of dirt that pop up from time to time. There's also sporadic artifacting to be found in some of the darker scenes. I'm not sure if this is a result of the 1080i resolution, but it's a minor complaint among a wave of compliments.

AUDIO:
The 7.1 DTS track is a real showstopper. Aggressive (but not overpowering) rear channel surround creates an enveloping experience, while dialogue is front-loaded and crystal clear. In the 23 episodes, there is nothing to complain about here.

EXTRAS:
Most notable among the cache of extras is the 'extended' pilot episode. Clocking in at about four minutes longer than the original version, you have the option of listening to director Danny Cannon's audio commentary as well.

A handful of deleted scenes are spread across these discs and are accessible from the individual episode menu.

Promos and a gag reel can be found on disc 5. Surprisingly, these are not presented in HD as is usually the norm with Paramount's supplemental material.

There's also a twenty minute "making-of" documentary that was included on the SD release. A brand new thirty minute documentary called CSI Season One - Rediscovering the Evidence is a cool little retrospective. Complete with participation of the cast and crew, it's a fun look back at the original year.

Finally, this set is BD Live enabled. While there isn't much available yet, fans can access episode promos used to market each weekly episode. BD Live has a ton of potential that has yet to be realized, but this makes for a cool little extra for the most hardcore fans and, who knows, there could be some really cool goodies coming down the pike at a later date.