ņWhy didnĒt I leave Julia right there? Perhaps because my life was just too real.Ņ - Jonas (Anders W. Berthelsen) 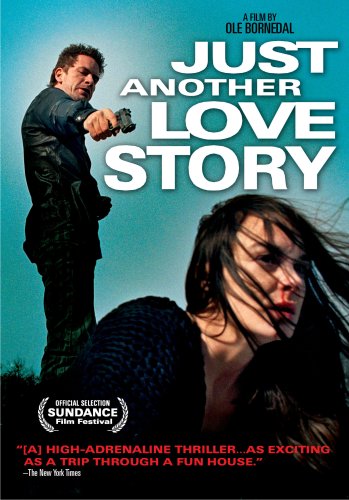 Stop me if youĒve heard this one before but Just Another Love Story is a tale about a normal man (albeit one who photographs dead bodies for a living) who meets a mysterious woman and is instantly enthralled by her. Such a bare bones plot description might have you running for the non-clich╚d hills. However, Danish filmmaker Ole Bornedal (both the Danish and Hollywood versions of Nightwatch), has much more up his sleeve than settling for classic film noir conventions. Instead, heĒs out to bash such conventions, and he does so in such a clever way that we donĒt even realize heĒs actually including a slew of clich╚s to move the story along. The end result of BornedalĒs technique is an unforgettable film that keeps us guessing throughout.

We first see Jonas (Anders W. Berthelsen) as heĒs lying on his back, bloody and seemingly left-for-dead. It isnĒt long before we flashback to meet an unharmed Jonas, who works as a crime scene photographer and enjoys life with his wife, Mette (Charlotte Fich) and their two children. When a simple family outing results in a broken-down car, a distraught woman on her cell phone is unable to maneuver quickly enough to avoid a devastating accident. Julia (Rebecka Hemse) is left 90% blind when she eventually emerges from a coma, and Jonas is there at her bedside. He meets her family, who assumes heĒs JuliaĒs boyfriend, Sebastian. Jonas plays along, convincing the memory- challenged Julia that he is, indeed, the love of her life, but our mild-mannered protagonist isnĒt exactly thinking straight and just might not be prepared if the real Sebastian (Nikolaj Lie Kaas) shows up to end half of his new double-life.

Things get pretty brutal at times during the film, and itĒs all the more effective as a result. While we get some sexy, intensely erotic scenes in the first five minutes, the intensity really picks up during JuliaĒs car wreck sequence. ItĒs easily one of the most brutal scenes of its kind (rivaling even the opening crash sequence in Final Destination 2), but BornedalĒs choice of camera angles and use of fast-cutting techniques add an extra emotional impact on the viewer. Stark, visceral images are on display also, adding a disturbing edge to the proceedings that exists throughout. We even teeter on the edge of the horror genre with the presence of a fully bandaged, wheelchair- bound hospital patient, whose identity is at least slightly predictable. Still, even such an easily guessed twist is overshadowed by the rest of the brilliant script, which never lets up and never disappoints.

While this might not be as multi-layered and polished as last yearĒs other great, foreign thriller, Tell No One, Ole BornedalĒs spine-tingler is just as mesmerizing. The plot twists come a mile-a-minute, but they never seem frantic and itĒs clear that the filmmakerĒs intentions arenĒt simply cheap manipulative tactics. He has an end game also, and when it is finally revealed, weĒre left equally compelled and satisfied. Bornedal could have easily succumbed to his penchant for stylish flourishes and given us a junk, Hollywood-esque, happy ending, but instead, he leaves us questioning the morals behind all of the main charactersĒ actions. What else can we ask for from a film than something to mull over long after itĒs finished.