“Thanks to you, doctor…you are a doctor, aren’t you?” - Edward Parker (Richard Arlen) 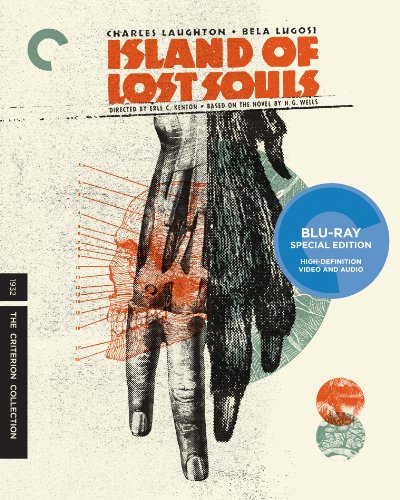 This classic take on H.G. Wells's book, The Island of Dr. Moreau should make it easy to forget the more recent Val Kilmer/Marlon Brando adaptation of the same story, and then some.

Anyone who had the misfortune of seeing the 1996 version of The Island of Dr. Moreau knows the essence of H.G. Wells’ novel, albeit in a horribly misguided, unintentionally farcical way. If you want to really capture what that novel is really about, and, at the same time, cleanse your mind of the aforementioned awful Val Kilmer/Marlon Brando vehicle, look no further than The Criterion Collection’s new Blu-ray disc for the 1932 film, Island of Lost Souls. Despite a strong cast that included Charles Laughton (The Hunchback of Notre Dame), Bela Lugosi (Dracula, White Zombie), and Leila Hyams (Freaks), director Erle C. Kenton’s (House of Frankenstein, House of Dracula) movie never really took off, and still isn’t as popular as other monster movies of its day. Still, Island of Lost Souls, does have a rabid cult following, which can now easily be grown thanks to this wonderful new Blu-ray disc that includes some extremely engaging supplemental features.

Edward Parker (Richard Arlen) has been shipwrecked, and is saved when he’s picked up by Captain Davies (Stanley Fields). Davies and his unusual cargo, numerous wild animals, are headed to a small remote island. When Parker unwilling winds up on the island as well, he meets Dr. Moreau (Charles Laughton) a scientist, who, with his assistant, Montgomery (Arthur Hohl) is performing mysterious experiments. Parker soon discovers that these experiments involve the rest of the island’s inhabitants, a collection of man-beasts and a lone Panther Woman known as Lota (Kathleen Burke). While he continues to try and find a way to escape Moreau’s madness, Parker’s fiancée, Ruth (Leila Hyams) is looking for him, with the assistance of Captain Donahue (Paul Hurst) and his men. If Parker can, indeed, escape Moreau’s island, he still might never be able to escape the conflict between man and beast.

There’s no doubt that this is still the creepiest, most effective adaptation of H.G. Wells’ novel to date. It’s also the most true to the source material, much of which can be attributed to the wonderful set design and special effects work. While lacking in the extreme detail of modern effects work, it’s the old school, hand-crafted costumes and masks that give this film’s creatures their charm and further enhances their fear factor. The actors are far from slouches either, with wonderful star turns by Arlen, Hohl, and Hyams. This is clearly Charles Laughton’s show, though, as he creates an eerie presence in Dr. Moreau that sticks with us long after the movie ends. Laughton has crafted a character that leaves the audience emotionally conflicted. At first we see Moreau as strictly a madman, essentially playing God in a way that seems as self-serving as can be. As the film progresses, our feelings change about the man, and we’re left struggling internally as to whether we should be pleased about Moreau’s fate, or actually feel sorry for this misunderstood genius. If you’re one of the too many people out there (many of which, I’m sure, are even die-hard horror film fans), who have yet to experience Island of Lost Souls, this disc leaves you without any more excuses to do so.

The extras are reason enough to snatch up this disc, and they consist of video conversations that were filmed in 2011. The first piece involves filmmaker John Landis, legendary makeup artist Rick Baker, and genre expert Bob Burns, and this trio carries on an engaging, nostalgic discussion about Island of Lost Souls, reflecting on those involved with the making of the film, and how it never really received the credit it deserved within the history of horror cinema. Next, is an interview with horror film historian David J. Skal, during which he focuses quite a bit on H.G. Wells’ novel and how faithful the 1932 adaptation really is. A truly fascinating extra is up next, and it’s a 14- minute conversation with filmmaker Richard Stanley (Hardware, Dust Devil), who not only received writing credit on 1996’s The Island of Dr. Moreau, but was originally hired to direct the film, then subsequently fired days after the production began. While, the story behind this mess of a film has been well documented, it’s riveting to hear the story from someone so directly involved in it, especially when Stanley actually apologizes for his involvement with what he feels is a near disgrace to H.G. Wells’ book. Things get even better with the next piece, a 20-minute interview with Gerald Casale and Mark Mothersbaugh of the band Devo. They talk, in great detail, about the strong influences that Island of Lost Souls had on the creation of their band, and, as a huge bonus, we also get the awesome 1976 Devo short film, In the Beginning Was the End: The Truth About De-Evolution. This odd, experimental, and wonderful short film is Devo in a nutshell, filled with themes and characters that are still an integral part of the band’s live shows today. Rounding out this top-notch collection is an audio commentary track recorded in June of 2011with film historian Gregory Mank, a stills gallery, and a trailer for Island of Lost Souls.