"You know what? You're the most perfect person I ever met." - Pinky (Sissy Spacek) 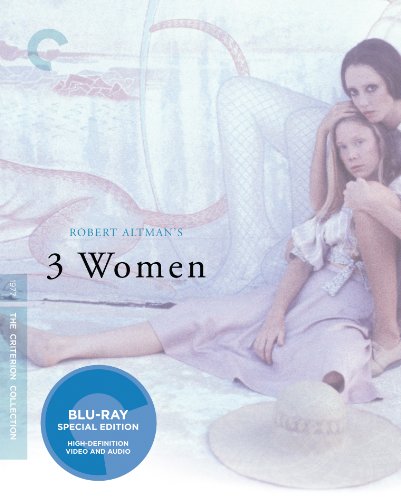 Late in his career, Robert Altman became the aging lion of American cinema, which lost sight of the fact that he was very much a renegade—he was little too old to include in the film generation of Coppola, Spielberg, Bogdanovich, Friedkin and the like, but he was surely not an old studio hand in the tradition of, say, Ford and Hawks. As was Fellini, Altman seemed frequently more interested in behavior than in story; and many of his most successful and popular films (M*A*S*H, Nashville, Gosford Park) succeed best as portraits of communities and institutions. We come away remembering the place, the feel, the ambiance, more so than the characters and how they change.

So 3 Women differs in some significant respects from some of the better known Altman pictures, but it's a moody and intriguing piece nonetheless. Altman's sense of geography is especially keen here—we're in the California desert, in and around the Desert Springs Rehabilitation and Geriatrics Center. Among those employed there is Millie, who happily chirps along to herself, holding up her end of the conversation even if she's blithely talking to people's backs; amazingly enough, Millie gets herself a #1 fan in the new girl, Pinky. The psychological intertwinings of Millie and Pinky, two-thirds of the title characters, is the pole around which this film revolves.

But it's not really a movie about its story; much of it has a dreamy, almost hallucinogenic feel, and Altman is clearly more interested in moments and moods than he is in conventional structure. And frequently here that's wonderful—his sinuously moving camera takes in the landscape, and becomes a meditation of sorts on the end of the myths of the American West. Pinky and Millie are a pair of odd and memorable characters, and your reactions to them will probably be caught up in your iconic consideration of the actresses in the roles. Altman frequently displayed a fascination with Shelley Duvall, in Nashville especially; but he may have fixed her forever in the popular imagination by hiring her to play Olive Oyl, a decision from casting heaven. She's a strange, ghostly presence, and what starts as eccentric can, with the run of the picture, become downright irritating, if not maddening. (It may be cruel to say so, but Kubrick was on to something when he cast her in The Shining. Even if you're not as unhinged as Jack Torrance, you can almost understand wanting to go after Shelley with a hatchet.) And Spacek is intriguing as well—these were the years of films like Carrie and Badlands, in which her seeming innocence belies something much deeper and more disturbing. Janice Rule is the third woman, a specter, a nearly silent desert artist, whose symbolic significance is far greater than her screen time.

There are times, certainly, when Altman's concern about other things results in the movie not making a whole lot of narrative sense; and there are many moments that would probably have a great deal more clarity and resonance and import if the bong had just come around the circle back to you. It's really more of a chamber piece, and in Altman's canon probably most resembles other character studies, like Come Back to the Five and Dime, Jimmy Dean, Jimmy Dean. I know a couple of folks who call this their favorite Altman picture, which I admit to finding kind of an odd choice; I can also understand Criterion wanting to get the director in their DVD catalog, and this upgrade to Blu-ray is a very handsome one. It's a reminder that Blu-ray is more generous with sound than with picture—the shimmering new transfer makes the desert look even more hypnotic, the Southwestern palate that much more captivating, but the audio problems from the previous release are still evident.

The extras have also been transferred to Blu-ray essentially intact, most notably the commentary track from the director, which, like the movie, is sort of freewheeling, with a decided stream-of-consciousness aspect to it. Altman talks about the idea for the film coming to him in a dream, and while he's known for the loyalty he inspires in his colleagues, he's a little pejorative about writers (Altman thinks that scripts are overemphasized; it shows, for good and for ill) and cinematographers (he nearly gleefully reports on how he's fired them). Temporality is a big theme for him, too: "My ideal film would be a painting with music." You’ll also find an original trailer; a teaser and two television spots; and seven chapters' worth of images in the stills gallery, mostly from the set.

In a funny way, this movie is almost closer to theater; it shares some obvious affinities with, for instance, Edward Albee's Three Tall Women, and not just because of their titles. So this sure isn't a fun-for-the-whole-family kind of movie, but it is challenging and intriguing and frequently beautiful.