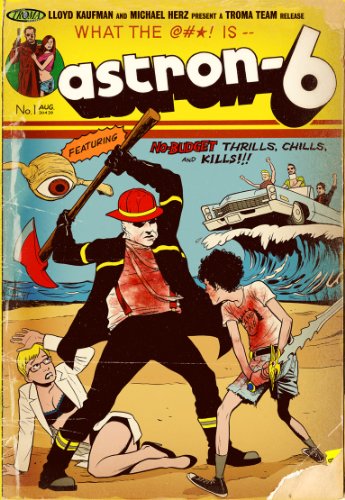 I'll admit to never having heard of Astron-6 before receiving this new DVD collection, but, with Troma responsible for this release, I'm sure we're all in for plenty of fun, insane depravity.

I had no clue, whatsoever, what Astron-6 was when I received this new DVD collection to review. Even after an initial inspection of the DVD packaging, I was lost as to what to expect from this massive amount of short films. It turns out that Astron-6 is a Canadian film production company that came to be in 2007, and was founded by Adam Brooks and Jeremy Gillespie. The initial group of two grew to a collection of five equal partners when Matt Kennedy, Conor Sweeney, and Steven Kostanski joined the founders to assist in the making of low budget, independent short films that emulate similar B-movies from the 1980s. The filmmakers finally made a feature film (Father’s Day), which debuted at the 2011 Toronto After Dark Film Festival, but until that hits DVD, we can receive the proper introduction needed to appreciate their unique brand of filmmaking, thanks to the 2-disc Astron-6 Collection from Troma.

It doesn’t take long at all before we know what we’re getting ourselves into with this DVD collection. Right after the disc finishes loading, we’re treated to a 2-minute introduction by the face of Troma, Lloyd Kaufman, during which he continues to mispronounce the name Astron-6, and essentially ensures us that he has no idea what he’s introducing. Such off-the-wall ridiculousness is what Troma’s all about, and rest assured, this Astron-6 Collection more than fits in with the rest of the studio’s releases. We get 18 short films spread out over two discs, and, rather than go over each and every one, a pointing out of the highlights seems more fitting, as discovering these shorts for the first time on your own is part of their magic.

The pace is set right off the bat with Cool Guys, where two young nerds and their older Uncle-figure go to the beach. To say that mayhem ensues would be the understatement of the year, and what we actually witness is so off-the- wall, that it’s hard to believe that the Astron-6 guys actually top the insanity with each subsequent film in the set. These guys clearly love the Grindhouse-style of filmmaking that Quentin Tarantino and Robert Rodriguez paid homage to in their aptly titled Grindhouse film, and Astron-6’s You’re Dead is a nice tribute of their own. There’s also a great trailer for Father’s Day that gives us a great look at the greatness we can expect from the aforementioned feature film of the same name. The best of the bunch on Disc 1, however, is Punch Out, a mix tape of zombie movies, buddy comedies, and teen sexploitation flicks that is thoroughly entertaining from beginning to end. More greatness abounds on the second disc, including a send-up of the Halloween franchise called Fireman, and the best effort on this disc, an extremely fun familial zombie film called Inferno of the Dead.

If you’re looking for solid, professional acting, tightly-written screenplays, and movies with at least some sort of redeeming value, then you’re in the extreme corner of the “wrong place” with this set. Each and every one of these shorts wear their extreme low budgets as a badge of honor, and once you’ve seen the first film in this collection, you’ll be glad they do. Better yet, after enjoying all 18 short films, we get a bevy of extras to revel in just as much. These include audio commentaries, trailers, photo galleries, and behind the scenes footage, but the real gems of the set involve a surreally-presented discussion with heralded filmmaker Guy Maddin. This piece is as odd as the rest of the set, and Astron-6 fans wouldn’t have it any other way. With an early 2012 U.S. release date for Father’s Day the future looks beyond bright for Astron-6. If the eventual DVD release of that feature film is as good as this Astron-6 Collection, their cult following can only grow exponentially.