"It would be nice, if all you had to deal with every day, is God. But you don't. You have to deal with people." - Joyce McKinney 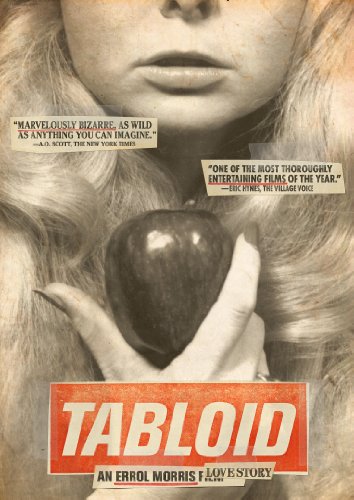 Extra! Extra! Read all about it! Errol Morris and the Interratron on a juicy, sexy scandal from back in the day!

Errol Morris is masterful at so many things, especially at finding subjects that suit him. And one of the things that's so fun about Tabloid is how funny and baroque his filmmaking style has become—it's almost as if you can feel him decompressing after his carefully argued, frighteningly controlled at the horrors of Abu Ghraib, Standard Operating Procedure. It's not that this seems throwaway by comparison&#8212but with no one's life on the line and no national security issues in play, Morris can have at it, have fun with his story, and even show off a little bit.

Here he tells the story of Joyce McKinney, apparently an English tabloid staple back in the day, but largely forgotten to us now. (It's not a principal point of emphasis, but the film is a reminder of how quickly this flames burn out. Who in 30 years will recall the details of, say, Casey Anthony, or Scott Peterson, or Natalie Holloway?) McKinney was a young thing out of Texas, who moved to Utah and became obsessed with Kirk Anderson, a young Mormon—his family was having none of her, who was not a member of their church, and one day, Anderson just flat-out disappeared.

So Joyce did what anyone would do, right? She hired a private investigator. Who found her man in London—he hadn't absconded, apparently, but was simply on his Mormon mission. What happened next isn't exactly clear, and is the substance of the movie&#8212did the church come between these two star-crossed lovers? Or is she simply a crazy woman who got men to do her bidding?<Br><br> Morris lets the principal participants tell their stories (well, all but Anderson, who refused to be interviewed), and allows us to draw our own conclusions. He uses his signature style, in which his interview subjects speak directly to the camera&#8212it's a bit unnerving, but it gives them a kind of candor as well. One of the best elements is the tabloid war that explodes over the case, with London's Express calling McKinney basically a nun, while the Daily Mirror calls her a whore. (Typical headline: "Temptress in the Garden of Evil.")<br><br> One question you start to ask yourself is: is Morris exploiting this woman? Is she some sort of trailer park Norma Desmond, psychologically impaired, all these years later longing for one more perp walk in front of the paparazzi? Maybe&#8212and like a lot of crazy people, she can be quite charming. Her story takes a weird Act 3 turn and we unexpectedly find ourselves in a movie about dog cloning in South Korea&#8212Morris pulls together the strands, but you get the sense that he's already used up his best material. That's fine, though, because his best material is awfully damn good. <br><br> MPI's DVD release of the title comes in a very handsome transfer&#8212at first, working in a 2.40 aspect ratio might seem counterintuitive for a documentary, but Morris makes it work, filling the frame and unapologetic about jump cuts in footage of talking heads. It's a bit of a disappointment that there are no extras at all, though, as the territory sure seems fertile.</p><p class="credit" align="right">Jon Danziger December 7, 2011, 10:08 am</p></p></div> </div> </section> <footer><p class="foot"><a href="ducu.php">Home</a> | <a href="r-reviews.php">Review Vault</a> | <a href="r-inteviews.php">Interviews</a> | <a href="r-articles.php">Articles</a> | <a href="r-apps.php">Apps</a> | <a href="r-about.php">About</a> | <a href="mailto:webmaster@digitallyobsessed.com">Contact</a></p> <div id="botad" align="center"> </div> <div id="copyright">&copy; Copyright 1999-2019<div> </footer></div> <script type='text/javascript'>var _merchantSettings=_merchantSettings || [];_merchantSettings.push(['AT', '11l8pS']);(function(){var autolink=document.createElement('script');autolink.type='text/javascript';autolink.async=true; autolink.src= ('https:' == document.location.protocol) ? 'https://autolinkmaker.itunes.apple.com/js/itunes_autolinkmaker.js' : 'http://autolinkmaker.itunes.apple.com/js/itunes_autolinkmaker.js';var s=document.getElementsByTagName('script')[0];s.parentNode.insertBefore(autolink, s);})();</script> </body> <script>'undefined'=== typeof _trfq || (window._trfq = []);'undefined'=== typeof _trfd && (window._trfd=[]),_trfd.push({'tccl.baseHost':'secureserver.net'},{'ap':'cpsh'},{'server':'p3plcpnl0694'},{'dcenter':'p3'},{'id':'808962'}) // Monitoring performance to make your website faster. If you want to opt-out, please contact web hosting support.</script><script src='https://img1.wsimg.com/traffic-assets/js/tccl.min.js'></script><script src='https://img1.wsimg.com/traffic-assets/js/tccl-tti.min.js' onload='window.tti.calculateTTI()'></script></html>