Ambitious and epic in scale and provides the ultimate portrait of our earth's Polar Regions, capturing the power of natural elements and the fragile, jaw-dropping beauty of scenery unlike anywhere else in the world. This landmark high definition series brings to the screen the frozen wilderness of the polar region for what could be the last time before they change forever.

"Frozen Planet...so bravely and cleverly shot, was as shiveringly intense as television gets..." - The Observer 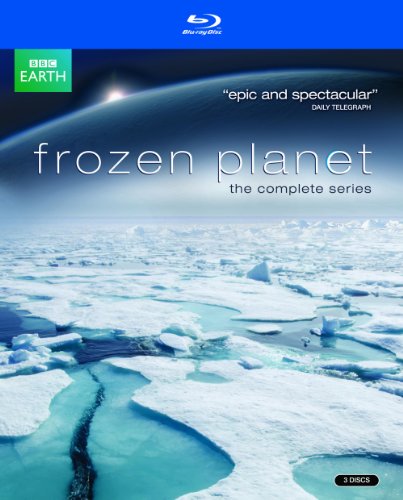 New York - January 18, 2012 - Embark on a trip of a lifetime with BBC Home Entertainment, as the DVD and Blu-ray release of Frozen Planet: The Complete Series

glides onto shelves April 17, 2012. Following the Discovery Channel premiere in North America on March 18, 2012 and just in time for Earth Day, this astonishing and breathtaking seven part series is narrated by the legendary Sir David Attenborough, hailed by The Telegraph as "the father of natural history television." Join Emmy(R) Award winning Executive Producer Alastair Fothergill and the team behind the groundbreaking series Planet Earth as they take you on the ultimate adventure into a breathtaking landscape. This is the Poles as you have never seen them, and may never see them again.

is ambitious and epic in scale and provides the ultimate portrait of our earth's Polar Regions, capturing the power of natural elements and the fragile, jaw-dropping beauty of scenery unlike anywhere else in the world. This landmark high definition series brings to the screen the frozen wilderness of the polar region for what could be the last time before they change forever.

Featuring the incredible wildlife cinematography that made Planet Earth a worldwide success, Frozen Planet has taken new technology to the most extreme and remote parts of our planet capturing groundbreaking imagery above and below the ice.

Encounter spectacles that few of us will ever witness first hand. Go deep under the sea-ice into a magical world of giants, plunge into the heart of an erupting polar volcano and fly to the South Pole across the Antarctic icecap - the largest concentration of ice on earth - retracing the steps of the great Polar explorers.

Get closer than ever before to the lives of our best loved and most charismatic animal characters - polar bears, penguins, wolves and orcas, and witness the most extraordinary examples of survival against the odds that can be found anywhere on our planet.

DVD and Blu-ray Bonus Features
* Science at the Ends of the Earth - An examination of the remarkable scientific work being performed at the South Pole
* Freeze Frame - A series of 7 10-minute "making of" featurettes, one for each episode.
* Production Video Diaries - A set of 47 video shorts made by the Frozen Planet producers, directors, camera crew and more giving personal insights into this remarkable series.
* Frozen Planet: The Epic Journey - The best moments from Frozen Planet compiled into one 60-minute highlights special
* Music Only Viewing Options

Tauck Sweepstakes for The Ultimate Polar Bear Adventure
In support of the DVD/Blu-ray release of Frozen Planet, BBC Home Entertainment is partnering with Tauck, a world leader in premium guided natural history travel, for a Polar Bear Adventure Sweepstakes. Two pairs of winners (one in the U.S. and one in Canada) will receive a once-in-a-lifetime opportunity to observe these magnificent, endangered animals up close as well as discover the rich human and natural history of Manitoba, Canada. The six-day grand prize includes round trip airfare to Winnipeg, Manitoba, private charter flights between Manitoba and Churchill, local sightseeing and two full-day excursions deep into polar bear country, plus a private cocktail party and dinner at the Manitoba Museum, a storytelling session with a First Nation resident, a dog sledding demonstration and much more. It will truly be the trip of a lifetime for the winners of the BBC Home Entertainment/Tauck Polar Bear Adventure Sweepstakes.

About BBC Worldwide Americas:
BBC Worldwide is the main commercial arm and a wholly-owned subsidiary of the British Broadcasting Corporation (BBC). BBC Worldwide Americas brings together all of BBC Worldwide businesses across North and South America. The company exists to maximize the value of the BBC's assets for the benefit of the UK license payer, and invests in public service programming in return for rights. The company has seven core businesses: Channels, Sales and Distribution, Content and Production, Consumer Products, Digital Media, Magazines, and recently formed Brands, Consumers & New Ventures. Under these businesses fall two key brands in the US - digital cable channel BBC America and a bi-coastal production arm responsible for the smash hit Dancing with the Stars for ABC.