“Pierre it’s your fault too. I can explain everything!” - Séverine (Catherine Deneuve) 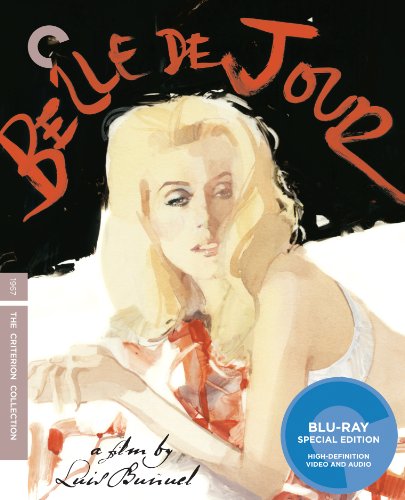 The ageless Catherine Deneuve gives one of her most remarkable performances in Luis Bunuel's surreal classic. I can't wait to see how great it looks on a Criterion Collection Blu-ray disc.

Not that you’re hearing it here first, but Catherine Deneuve is, quite simply, one of the most beautiful women to ever roam the planet Earth. Her beauty has been showcased on the silver screen for 55 years and counting in such classic films as Repulsion and The Last Metro, as well as starring in edgier fare like The Hunger and one of my favorite films of all-time, Lars Von Trier’s Dancer In the Dark. Arguably her most memorable role, however, is that of Séverine in Luis Buńuel’s 1967 masterpiece Belle de Jour. This was the perfect showcase for both Deneuve’s beauty and acting talents, as the Father of surrealist cinema crafted another trippy tale that has stuck near the top of movie lore for nearly half a century now. Belle de Jour is finally getting the Criterion Collection Blu-ray treatment, in the form of a single-disc release that will more than please the film’s numerous fans.

Séverine Serizy (Deneuve) and her husband, Pierre (Jean Sorel) have been married for nearly a year, and have settled into a rather routine life. He is a doctor who is gone all day and often into the night, while Séverine spends her days trying to keep herself entertained. Séverine has been having vivid dreams involving sex and pleasurable punishment, and she longs for a reality that involves at least some form of similar excitement. Henri (Michel Piccoli) is a mutual friend of Pierre and Séverine, who is attracted to the latter, and one day tells her about a local brothel run by a woman named Madame Anais (Genevičve Page). Eager to shake her boredom, Séverine builds up the courage to visit Madame Anais, and it isn’t long before Belle de Jour is born.

Belle de Jour has been confused over the years by the uninitiated, as being a film full of exploitative sex and not really being about anything. Such confusion couldn’t be more unwarranted, as after only one viewing of the film, you’ll realize that Buńuel’s vision, while clearly expressed in his unique, typically surreal fashion, is clear and he’s more interested in creating an overall erotic atmosphere than simply showing sex in a brothel. Instead, he gives us a deep, involved story that goes to emotional places previously untouched, especially when the extremely dangerous Marcel (Pierre Clémenti) appears at the brothel and falls for Séverine. Instead of playing it safe, Buńuel uses the Marcel character to take the film into truly dark territory, as despite Séverine’s knowledge that getting too close to Marcel can only lead to bad things, she is clearly drawn to his most dangerous and potentially deadly aspects. It’s such carefully crafted storytelling like this that made Buńuel more than just a surrealist visual trickster.

I have little doubt that Buńuel could have crafted a fine film in Belle de Jour with another actress in the title role, but it wouldn’t have been nearly as amazing as it is with Deneuve. She embodies Séverine effortlessly, making her both sexy and vulnerable throughout the film, and more than fitting the mold for Buńuel’s finest-written character. While her character “changes” from Séverine to Belle de Jour, Deneuve resists going to extremes to express the transformation. The subtle differences that we see in her character when she’s in the brothel versus with Pierre at the tennis club in her “normal life” are so well-integrated into her overall performance that we as the audience become as wrapped up in the character as Deneuve clearly did during filming. There have been some timeless female performances through the years, but not many can top what Deneuve accomplishes in Belle de Jour.

Once again The Criterion Collection has delivered a top notch Blu-ray release of a movie that has no business looking or sounding as great as it does, given its age. Belle de Jour sports a 1.67:1 widescreen transfer presented in 1080p, and the awesome booklet inside the DVD case tells us that this new presentation was crafted on a Spirit 2K Datacine from a 35mm interpositive. The bottom line is that the film has never looked better, with nearly all specks of dirt and other debris having been removed to allow the bright, vivid color scheme to truly sparkle on the screen. The French LPCM 1.0 audio is inherently undynamic, but the dialogue and music have never worked as well together, with the actors’ speech remaining crystal clear throughout. The extras include a wonderful new (filmed in 2011) documentary called That Obscure Source of Desire, an interview with screenwriter Jean-Claude Carriere, a segment from the French TV show Cinema, three trailers for Belle de Jour, the aforementioned booklet, and an audio commentary track with Princeton professor Michael Wood who previously penned a book about the film. It goes without saying that this incredible Blu-ray disc will wind up among the best releases of 2012.