DVD Review: RESURRECT DEAD: THE MYSTERY OF THE TOYNBEE TILES

“I began to notice more of these cryptic street messages all over the place.” - Justin Duerr 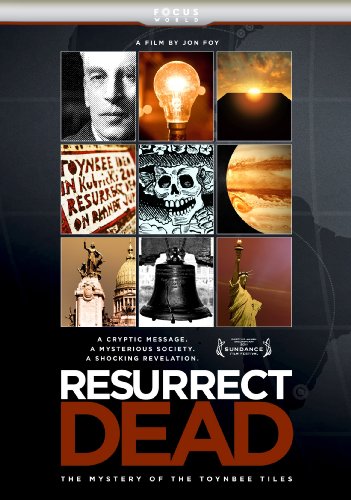 A truly intriguing subject will hopefully translate into a documentary that is just as compelling. The inclusion of Stanley Kubrick's name on the DVD cover only adds to the anticipation.

“What does it all mean?!” A simple, enough question, we’ve all heard before, right? When such a question is applied to certain subject, however, we instantly stop and take notice. Whether you care to answer that, let alone ask it following a screening of the documentary Resurrect Dead: The Mystery of the Toynbee Tiles, is an interesting question, in and of itself; the answer to which lies solely in whether you buy into what the filmmakers, and, more importantly, Justin Duerr are selling here. Sure, five minutes into the film you could easily jump on your laptop and search for “Toynbee Tiles” online (I certainly fought the urge to do so, myself), but do me a favor and don’t; instead take in every minute of director Jon Foy’s outstanding exploration of this strange phenomena.

The titular “Toynbee Tiles” are a series of actual tiles that are seemingly randomly imbedded on streets throughout the world, with most of them showing up on U.S. streets. Since they first appeared in the early 1980s, Justin Duerr has been trying to solve the many mysteries surrounding them. Why are there so many of them? Who is writing them, let alone leaving them in the middle of busy streets? Will they ever stop? All of these questions and more have driven Duerr and his team of fellow Toynbee Tile detectives, most of which have spent the better of three decades pursuing questions to something that there just might not be answers for.

While the tiles are, naturally, the film’s main subject, the heart of the film lies in the exploration of Justin Duerr. We hear from his family and friends, who paint a picture of him as a man obsessed with all things related to the Toynbee Tiles, even going so far as to sacrifice a romantic relationship for his obsession. Other discussions involve Justin’s altercations with an art teacher who wanted him to conform to ways that could win him art-related rewards, while at the same time causing him to compromise his artistic vision. Justin is an extremely talented artist, who, because of such conflicts with teachers, dropped out of high school when he was 16, making what’s happened since all the more intriguing.

One of the film’s most incredible sequences involves Justin’s discovery of what appeared to be a freshly placed tile. He recounts that this tile was not in place when he was heading to his destination, but when he left and passed this same part of the street, he noticed the new tile, leading him to believe that he was mere minutes away from actually encountering the person or people responsible for the tiles. I’ll leave the mystery of whether Justin and his crew solve the central question of who’s behind the tiles as, well, a mystery. What I will say, however, is that regardless of whether the author is revealed, Resurrect Dead never loses steam, and remains one of the better documentaries of 2011. Entertainment One’s DVD release is a solid one, with an impressive anamorphic widescreen 1.85:1 presentation, along with a Dolby Digital 2.0 audio track that does a serviceable job, given the inherent nature of the material. The extras include an audio commentary track with director Jon Foy, a look at many of the Toynbee Tiles themselves, and a collection of deleted scenes that bring the entire Resurrect Dead experience full-circle.