PR: In the Footsteps of Marco Polo on DVD Jan 31

Many people have big dreams, but only a few bold adventurers live them. Denis Belliveau and Francis O'Donnell took a wild idea - retrace Marco Polo's entire 25,000-mile, land-and-sea route from Venice to China and back - and spent two incredible years of their lives making their dream a reality. 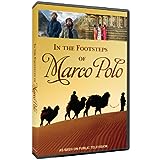 Arlington, Va. - January 31, 2012 - PBS Distribution today announced it is releasing In the Footsteps of Marco Polo

on DVD. Many people have big dreams, but only a few bold adventurers live them. Denis Belliveau and Francis O'Donnell took a wild idea - retrace Marco Polo's entire 25,000-mile, land-and-sea route from Venice to China and back - and spent two incredible years of their lives making their dream a reality.

In the Footsteps of Marco Polo

chronicles the journey of two ordinary guys - Belliveau, at the time a wedding photographer, and O'Donnell, an artist and former Marine - as they set out to follow Polo's historic route. Equal parts travelogue, adventure story, history trek and buddy movie, the 90-minute film weaves footage from the duo's often perilous voyage with Marco Polo's descriptions and experiences. Richly enhanced with Belliveau's award-winning photographs, the program details their highs and lows as they retrace Polo's path, trying to see what he saw and feel what he must have felt. In the Footsteps of Marco Polo

Program Synopsis
In the Footsteps of Marco Polo

captures the pair as they survive a deadly firefight and befriend a warlord in Afghanistan, cross the forbidding Taklamakan Desert in a Silk Road camel caravan, endure continuous interrogations from authorities, and live among cultures ranging from the expert horsemen of Mongolia to the tattooed tribes of Indonesia.

"We made a pact," says O'Donnell, "that, under any conditions, no matter what, we were only coming back to the United States two ways - either dead or successful."

In the spirit of history's great adventurers, the two make their way across the world's largest land mass and back, securing - or, when necessary, forging - visas, surviving extreme temperatures, and talking their way out of jams brought on by Tajik soldiers, Chinese security officers, and an assortment of other bureaucrats, border guards and armed warriors.

"We made it the 13th century in our heads," said Belliveau. "What was this like for Marco? How would it have been for him? We were going to try to make this whole journey like we were living in Marco Polo's world." Without the assistance of air travel, they made their way on foot, horseback, camelback, in jeeps, trucks, boats and trains.

But as fascinating as the world looked through Marco Polo's eyes, is the world and the people Belliveau and O'Donnell saw through their own. "Travel is the enemy of bigotry," says O'Donnell. "There's a lot more good people on the planet than bad...Get out there, meet [people], they're good," adds Belliveau.
In the Footsteps of Marco Polo

Funding for In the Footsteps of Marco Polo

is provided by The Starr Foundation and the Center for Cultural Interchange.

About WNET
New York's WNET is America's flagship public media outlet, bringing quality arts, education and public affairs programming to over 5 million viewers each week. The parent company of public television stations THIRTEEN and WLIW21 and operator of NJTV, WNET produces and presents such acclaimed PBS series as Nature, Great Performances, American Masters, Need to Know, Charlie Rose, Tavis Smiley and a range of documentaries, children's programs, and local news and cultural offerings available on air and online. Pioneers in educational programming, WNET has created such groundbreaking series as Get the Math, Noah Comprende and Cyberchase and provides tools for educators that bring compelling content to life in the classroom and at home. WNET highlights the tri-state's unique culture and diverse communities through SundayArts, Reel 13, NJ Today and the new online newsmagazine MetroFocus.

In the Footsteps of Marco Polo