On February 9, 1964, Rock & Roll changed forever when the Beatles premiered live on The Ed Sullivan Show. An estimated 73 million viewers tuned in. Teens all across America were glued to their TVs as they witnessed a true turning point in Rock & Roll history. The next day, 10 million teens had something new to do. With their jaws still on the floor and inspiration stirring within, thousands of youngsters knew that their destiny lay in Rock & Roll and the "Teen Scene" was born.

"...a GLORIOUS RIDE through a more innocent, and exhilarating time when the music really mattered." - Matt Smith, Cleburne Times-Review 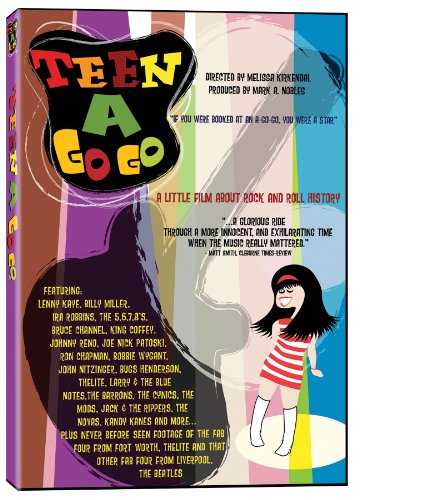 AVAILABLE ON DVD AND DIGITAL DOWNLOAD PLATFORMS ON MARCH 13, 2012
LOS ANGELES (March 6, 2012)- The 1960s undoubtedly ushered in the birth of 'Rock-N-Roll' in America, largely in part to the influence of The Beatles. The British invasion took over the United States like a wildfire after The Beatles premiered on the Ed Sullivan Show. The next morning, garage bands across the country woke up with "Beatle fever" and began growing long hair. From that moment on America's youth had a new obsession for this groovy music and thus the "teen scene" was born. This phenomenon struck one particular city in Texas, Fort Worth, and left an everlasting mark. On March 13, 2012, Cinema Libre Studio will release on DVD and digital download, Teen a Go Go

, an entertaining documentary that takes a nostalgic look back at the 1960s "teen scene" in Fort Worth, Texas.

The massive popularity of rock-n-roll swept teenagers of the 1960s from their parents' garages to the teen clubs around town like Teen A Go Go. This amateur music, mostly about high school dramas and young love, evolved into paying gigs that came with groupies. Youth culture developed and music gave teenagers something to do on the weekends. If these kids couldn't play sports they either learned how to play an instrument or went to one of the "A Go-Gos" to listen to the music. Going to Teen A Go Go was the thing to do, but if you were booked at an "A Go-Go" you were a star.

features the biggest names and best music that came out of Fort Worth during this time. The biggest hit by far was Bruce Channel's "Hey! Baby," which featured Delbert McClinton on the harmonica. McClinton's harmonica styling famously influenced John Lennon's harmonica on The Beatle's song "Love Me Do." Another band, The Elites, had a major success with their song "One Potato, Two Potato, Three Potato, Four" (originally a spoof on "Surfin' Bird" by The Trashmen), and it is still widely played and covered today. Other hits include; Ray Sharpe's "Linda Lu," Larry Roquemore's and The Blue Notes "Night of the Phantom," and Nick "The Creep" Kithas of Creep and the Deacons', "Betty Lou Got a New Tattoo." These small town successes even played the opening act at the Will Rogers Coliseum for big named bands such as; The Doors, The Beach Boys, Blood Sweat and Tears and The Yardbirds. Even The Kandy Kanes, one of the only girl groups of Fort Worth, got in on the action when they had the huge surprise of lending The Rolling Stones their equipment.

Billy Miller, owner and producer of Norton Records, argues that Fort Worth's teen scene had a "very high batting average... with really, really good records that will always sound good". However, even though the quality of the records the bands made were impressive, inevitably none of the bands would be able to make he transition from local celebrity to mainstream radio. Had they been in Los Angeles, New York or even Dallas, immersed in a mass market audience, their luck may have been different.

This is the feature length directorial debut for Melissa Kirkendall, a Texas business entrepreneur who owns and operates several live music venues in Fort Worth. The film was produced by Mark Nobles, a writer and director, who has created television and radio commercials for local and regional clients, including NPR and has written his first book, "Fort Worth's Rock and Roll Roots." Teen a Go Go

SYNOPSIS:
On February 9, 1964, Rock & Roll changed forever when the Beatles premiered live on The Ed Sullivan Show. An estimated 73 million viewers tuned in. Teens all across America were glued to their TVs as they witnessed a true turning point in Rock & Roll history. The next day, 10 million teens had something new to do. With their jaws still on the floor and inspiration stirring within, thousands of youngsters knew that their destiny lay in Rock & Roll and the "Teen Scene" was born.

explores the Teen Scene phenomenon through the eyes and hearts of musicians across the country and one particularly unique and influential community in Forth Worth, Texas. The musicianship and influence this community contributed to Rock & Roll is both unprecedented and impressive in its almost "kept secret" state. Music these teens made in "one take" recordings from 1965 to 1968 has become highly collectible and in some cases, continues to receive radio play.

Through a series of interviews with the musicians themselves, industry experts, archival footage and photographs, Teen a Go Go

takes audiences on an entertaining and nostalgic ride into the teen scenes and into the lives of the people who lived it.

ABOUT CINEMA LIBRE:
Cinema Libre Studio a leader in the distribution of social issue documentaries and features by passionate filmmakers. The Cinema Libre team has released over one hundred films including the Sundance Audience Award•Winning FUEL, THE END OF POVERTY?, Oliver Stone's SOUTH OF THE BORDER, THE HARVEST/ LA COSECHA by executive producer Eva Longoria and Rachid Bouchareb's DUST OF LIFE, LITTLE SENEGAL and LONDON RIVER, which is currently playing in U.S. theatres. The studio is developing John Perkins' best-selling memoirs, CONFESSIONS OF AN ECONOMIC HIT MAN, into a major motion picture. www.cinemalibrestudio.com