PR: We Bought a Zoo On Blu-ray, DVD and Digital Download Apr 3 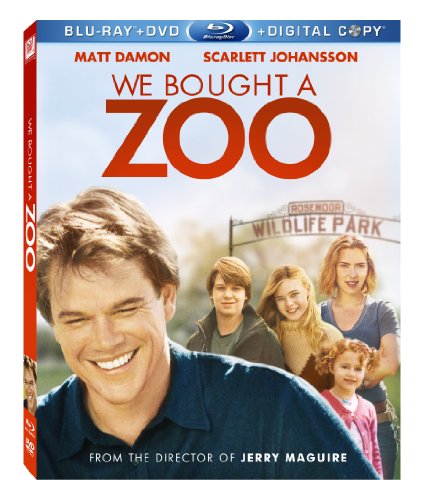 is "a sweet-natured tale...that you'll want to see with your kids" (Liz Braun, Jam! Movies).

Benjamin Mee (Damon) is a Los Angeles newspaper columnist and adventure writer who, as a single father, faces the challenges of raising his two young children. Hoping that a fresh start and a new life will restore their family spirit, Mee quits his job and buys an old rural house outside the city with a unique bonus feature: a zoo named the Rosemoor Animal Park, where dozens of animals reside under the care of head zookeeper Kelly Foster (Johansson) and her dedicated team. With no experience, limited time and a shoestring budget, Mee sets out with the support of his family and the local community to reopen the zoo. Now, Benjamin is no longer reporting an adventure story; he's living it in his own backyard.

Featuring an incredible musical score composed by Jonsi of the band Sigur Ros, the We Bought a Zoo

Blu-ray is loaded with over 2 hours of special features including 20 deleted and extended scenes, a gag reel, four behind-the-scenes featurettes, commentary with Director Cameron Crowe, star J.B. Smoove (The Sitter, "Curb Your Enthusiasm") and Editor Mark Livolsi, and more. The film also features an English Family Friendly Audio Track that earned the Dove Seal of Approval. The Blu-ray and DVD will be available for an average retail price of $24.99 and $19.99 respectively. Prebook is March 7.

Blu-ray Combo Pack Special Features
* Blu-ray, DVD and Digital Copy including theatrical film
* Deleted & Extended Scenes
* Elevator Empathy
* A Gift From Ronnie
* Life is Elemental
* Thank You, Rhonda
* Rosie Names Her Peacocks
* Quick Learner
* Just Can't Get a Handle On It
* So Much Bloodshed
* Buster is Loose
* Utterly Free / Nobody Died
* I Make My Own Hours
* The Stuff is Alive
* We're Living The Story
* Disaffected Youth
* It's Their Zoo, Too
* Goodnight Big Mac
* Such a Cliche
* Sorry About the Rain
* Benjamin's Big Speech
* Opening Day
* Gag Reel
* "The Real Mee"
* "We Shot a Zoo"
* "Their Happy is Too Loud"
* Audio Commentary with Director Cameron Crowe, Star J.B. Smoove and Editor Mark Livolsi