Ralph Fiennes, who directs and stars in the title role, was nominated for a 2012 BAFTA Award - Britain's equivalent to an Oscar - for Outstanding Debut by a British Writer, Director or Producer. Based on the original play by William Shakespeare, the critically-acclaimed film features an award-winning cast that includes Gerard Butler, Academy Award(R) winner Vanessa Redgrave, Academy Award nominee Jessica Chastain, and Emmy(R) Award winner Brian Cox.

"One of the best pictures of the year." ~ David Edelstein, New York Magazine

ON BLU-RAY(TM) AND DVD 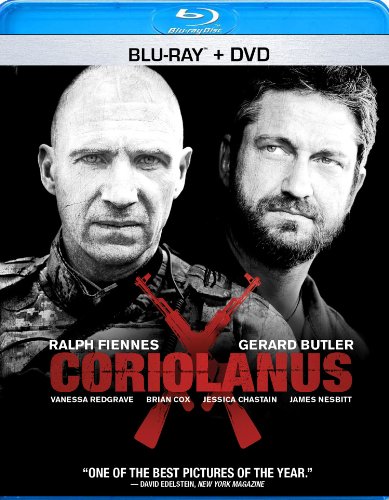 A Modern Version Of One Of William Shakespeare's Most Gripping Dramas, Coriolanus

. Fiennes, who also stars in the title role, was nominated for a 2012 BAFTA Award - Britain's equivalent to an Oscar(R) - for Outstanding Debut by a British Writer, Director or Producer. Based on the original play by William Shakespeare, the critically-acclaimed film features an award-winning cast that includes Gerard Butler (300, The Ugly Truth), Academy Award(R) winner Vanessa Redgrave (Julia, Howards End), Academy Award(R) nominee Jessica Chastain (The Help, Tree of Life), and Emmy(R) Award winner Brian Cox (Bourne Identity, HBO's "Deadwood"). A fast-paced, action-packed film, CORIOLANUS heads to retail on May 29, 2012 for an SRP of $34.99 for the Blu-ray(TM) Combo Pack and $26.98 for the DVD.

The classic legend of honor and betrayal has been astonishingly re-imagined in this exhilarating action thriller that wields a profound relevance for today. Caius Martius 'Coriolanus' (star and director Ralph Fiennes) is a feared and revered Roman General, suddenly pitted against his own city and fellow citizens. Rebelling against the power-hungry designs of his manipulative mother (Vanessa Redgrave) and rejected by his own people, Coriolanus incites a riot that expels him from Rome. The banished hero joins forces with his sworn enemy Tullus Aufidius (Gerard Butler) to exact his revenge -- and determine his destiny.

The CORIOLANUS Blu-ray(TM) Combo Pack and DVD special features include an audio commentary with the film's director and star, Ralph Fiennes, and a "The Making of Coriolanus" featurette. Note: Special features are subject to change.

ABOUT THE WEINSTEIN COMPANY
The Weinstein Company (TWC) is a multimedia production and distribution company launched in October 2005 by Bob and Harvey Weinstein, the brothers who founded Miramax Films in 1979. TWC also encompasses Dimension Films, the genre label founded in 1993 by Bob Weinstein, which has released such popular franchises as SCREAM, SPY KIDS and SCARY MOVIE. Together TWC and Dimension Films have released a broad range of mainstream, genre and specialty films that have been commercial and critical successes, including Tom Hooper's THE KING'S SPEECH, winner of four 2011 Academy Awards(R), including Best Picture.

Since 2005, TWC and Dimension Films have released such films as GRINDHOUSE; I'M NOT THERE; THE GREAT DEBATERS; VICKY CRISTINA BARCELONA; THE READER; THE ROAD; HALLOWEEN; THE PAT TILLMAN STORY; PIRANHA 3D; INGLOURIOUS BASTERDS; A SINGLE MAN; BLUE VALENTINE; THE COMPANY MEN; MIRAL; SCRE4M; SUBMARINE; DIRTY GIRL; APOLLO 18; OUR IDIOT BROTHER; I DON'T KNOW HOW SHE DOES IT; SARAH'S KEY; and SPY KIDS: ALL THE TIME IN THE WORLD IN 4D. Currently in release are MY WEEK WITH MARILYN; THE ARTIST; THE IRON LADY; and CORIOLANUS. Upcoming releases include W.E.; UNDEFEATED; and BULLY.

TWC is also active in television production, with credits including the Emmy(R) nominated and Peabody Award winning reality series Project Runway, the VH1 reality series Mob Wives, and the critically acclaimed HBO comedy/crime series The No. 1 Ladies Detective Agency which also received a Peabody Award. The company is currently producing After The Runway, Project Runway All Stars and Project Accessory. The company currently has 17 series in different stages of development, including Marco Polo, a scripted historical series about the great explorer; and The Nanny Diaries, being adapted for ABC by Amy Sherman Palladino (Gilmore Girls).