DVD Review: HISTORY OF THE WORLD IN TWO HOURS 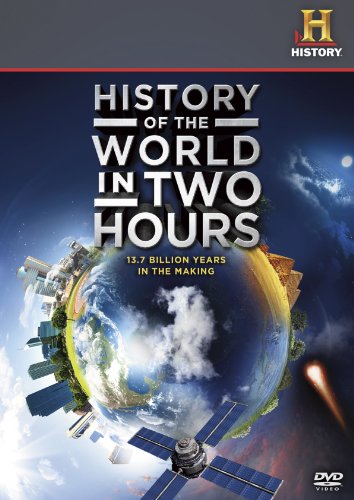 Though you may not learn anything that you didn't already know, this very brief history of the universe is lively and entertaining without being dumb.

In a victory for the efficiency of home video over commercial television, A&E Video’s History of the World in Two Hours clocks in at a brisk 88 minutes, and therefore is even more ambitious than its boastful title would suggest. Here we are presented with the high points of history from the Big Bang forward to approximately the present day, from the creation of the very first hydrogen atoms to humans and beyond. The first thirty minutes or so covers roughly 4.5 billion years, so time-pressed-but-inquisitive viewers could do worse.

Originally airing on H2, sister channel to History (which has largely been given over to reality TV of the Big Shrimpin' variety), the presentation here is unsurprisingly polished. Some of the usual suspects of popular science shows, including physicist Clifford V. Johnson and astrophysicist Alex Filipenko, are here to guide us through this history of just about everything. What is a bit more surprising is the format: what could have been a pedantic run-through of the most important topics in cosmology and human development is presented, instead, as a series of connections. From the Big Bang, to stars, to supernovae which are the furnaces in which heavy elements like silicon are forged and expelled into the universe. Humans then discovered uses for that same silicon in the very earliest tools, and then later in some of the most recent. It’s all very us-directed, as though the entire course of the universe has been steering toward human civilization for five billion years. Modern humans being the target audience for the show, that’s probably not all that bad a means of organizing the information. Stars are born, the first galaxies coalesce, the earth is formed in fire and cataclysm, and then here we come.

The treatment of subjects in the special is necessarily cursory, but not dumb. It even stops to make observations and present hypotheses that will be novel to most viewers, such as the importance of the sudden development of grass to the development of primate and human history (our ancestors learned to stand, in part, from the need to see over the tall grass to watch for food and predators--the ability to stand freed hands to develop for all sorts of other purposes). The great pyramids were carved from the remains of 50-million-year-old seashells. The viewer is directed to review the ingredients in a multi-vitamin, and note that the ingredients include elements that only exist for having been formed from the unimaginably massive explosions of stars. Our magnetic field not only protects us from the worst effects of the sun and allows for the development of life, but has allowed us to explore it via the compass.

Though the audio and video quality here are just fine for the television-quality material, there aren't any extras. If you're here for the feature presentation, you won't find anything to complain about technically.

I didn’t come away from History of the World in Two Hours with any advanced scientific knowledge, but I did enjoy the fast-paced, lively presentation and may have even learned a thing or two. This is, first of all, entertainment, but it's also a fine reminder that there's a bit more to us we typically take time to contemplate.