ìHey Cameron. You realize if we played by the rules right now weíd be in gym?î - Ferris (Matthew Broderick) 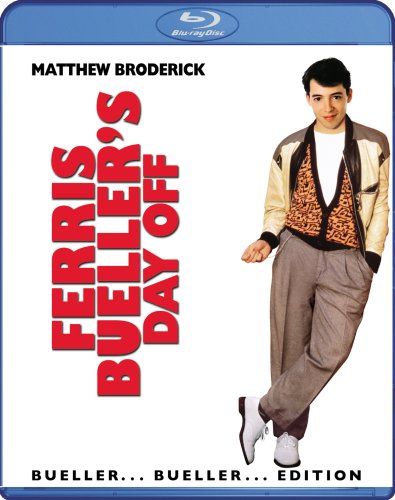 Ah, the 80s classic finally makes its way to Blu-ray. I can't wait to see what Mia Sara looks like in HD!

Ferris Bueller's Day Off is 1980s cinema god John Hughes' best film. It may not be as "deep" as The Breakfast Club, that wince inducing, earnest we-all-bleed-red high school weeper, but it's a hell of a lot more fun. Bit player Ben Stein, who earned a certain kind of celebrity playing a dry, droning high school economics teacher (Bueller? Bueller? Clear Eyes? Bueller?), calls it "one of the happiest movies," and he's right. That doesn't mean lightweight, necessarily, but simply uplifting, effervescent, and still remarkably fresh considering it was made smack dab in the middle of the most garish decade of the 20th century.

Matthew Broderick, a Broadway star then (Biloxi Blues) and now (The Producers on stage and screen), gives a career-defining performance as Ferris, a high school senior from a rich family, living a charmed life as the most popular guy in school who still manages to be likeable. He's a total cinematic creation, of course, brimming with self-confidence but goodhearted, a righteous dude who is a friend to cool kids and dweeby freshman alike. His best bud is Cameron Frye (Alan Ruck), a tightly wound perennial sad sack with an unhappy home life and a severe aversion to fun of any kind. Ferris decides Cameron needs to learn to live a little, so he arranges an elaborate plan to skip school and takes his girlfriend, Sloane (Mia Sara), and Cameron out for a day on the town, borrowing the senior Frye's priceless Ferrari in the process ("It is his love, it is his passion... It is his fault he didn't lock the garage.").

It's not all trips to Chicago Cubs' games and treks through the Art Institute and fancy restaurants, howeveróFerris also has to keep one step ahead of his principal, Ed Rooney (Jeffrey Jones), a small man in a small pond. Because this is a John Hughes movie, everyone over the age of reason is a total moron, including Ferris' clueless parents (Cindy Pickett, Lyman Ward) and Rooney's bubble-haired secretary Grace (Edie McClurg), but Rooney definitely gets the worst of it. He's not really a foil for Ferris, and we know it. But he serves as the ultimate example of a guy who needs to take a page out of his nemesis' book and just let things slide for a day (Grace: "He makes you look like an ass, is what he does, Ed.").

The movie is full of memorable characters (including Ferris jealous sister Jeanie, played by Jennifer Grey, who can't stand the fact that her brother leads such an effortlessly charmed existence), quotable dialogue ("You're Abe Froman? The Sausage King of Chicago?"), and kick-butt set pieces, particularly Ferris's rousing lip-synched routine to the Beatles' Twist and Shout during a parade in downtown Chicago. Hughes adds some goofy touches, with Ferris breaking the fourth wall to talk to the camera a few times, and the gag works thanks to Broderick's easy likeability. Chicago has also rarely looked this good on film (the city needs its own Manhattan, stat).

I'd kill to have a day off like Ferris (not that anyone couldóas any Chicagoan will tell you, travel time alone would make it impossible to get from Evanston to the Sears Tower to Wrigley Field to the Art Institute in the span of a few hours, never mind all the faking sick, parade singing, escaping from the principal, and driving home backwards antics), and that's why the movie, I think, transcends the teen genre and the fact that it was made 20 years ago. Freedom from responsibility is something everyone dreams of, and Ferris' lesson to Cameron reminds us that it's as much a state of mind as anything else.

VIDEO: Ferris Bueller makes his way to Blu-ray with a great-looking 2.35:1 widescreen hi-def transfer. Despite the gorgeous colors, fine image detail, and fresh look to the proceedings, thereís still enough grain, and other nuances that still allow the film to maintain its overall 80ís look. This is nearly the perfect balance, video-wise, for those purists out there who still enjoy their favorite older films jazzed up on the Blu-ray format.

AUDIO: The audio department gives us a new, lossless Dolby TrueHD lossless 5.1 track that makes this easily the best Ferris Buellerís Day Off has ever sounded on home video. The filmís soundtrack has always been one of its strong points, and this disc allows each and every song to come across with a clarity and boisterousness that has never previously been heard. The sound effects, dialogue, and other audio elements all gel together splendidly, resulting in a surprisingly special sound experience.

EXTRAS: Ferris Bueller's Day Off is the first John Hughes film to get a proper special edition (oh, I'm sorry, a "Bueller... Bueller..." edition), but it's still something of a disappointment. I can accept the fact that, once again, there are no trailers (perhaps there are music rights issues?) or deleted scenes (a clip of Ferris talking about wanting to be the first teen in space while being interviewed on the radio was snipped post-Challenger). But where is Hughes' feature commentary, included on the first DVD edition released in 1999? I have no idea why Paramount didn't include it, and I hope completists haven't sold off their copies expecting it to be here.

That said, there is over an hour of newly produced documentary material that's worth a look, featuring new interviews from all the major players save Mia Sara and, not surprisingly, the increasingly elusive Hughes himself (both are represented in vintage clips).

Getting the Class Together: The Cast of Ferris Bueller's Day Off (27m:41s) is the longest and most substantial doc of the bunch. Casting directors Jane Jenkins and Janet Hirshenson talk about finding the right actor to play each of the main roles, and then we hear from the actors themselves in both new and period interviews. There are some great stories about the shoot scattered throughout, some familiar (the actors playing Ferris's parents married in real life) and some a bit more obscure (actress Edie McClurg came up with her own hairstyle, and the jokes about all the pencils hidden in there came up on the set).

The Making of Ferris Bueller's Day Off (15m:25s) is a nice combination of vintage on-set footage and new interviews discussing various trivia on the film's production. Edie McClurg and Jeffrey Jones talk about their rapport as principal and secretary, while Alan Ruck talks about how his climactic, er, encounter with the Ferrari was filmed.

Who is Ferris Bueller? (09m:09s) examines the title character and the role Matthew Broderick played in turning him into an icon. Alan Ruck has a good point: "People say they identify with Ferris, but I think if they're really honest, they realize they're more like Cameron." Uh, yes.

The World According to Ben Stein (10m:48s) is a little weird. It's ten minutes of the man talking about, well, himself. Partly he focuses on the impact the film has had on his low-level celebrity, but he also preens as he discusses his career as a political speechwriter for Nixon and a certified genius and whatnot. Can't really accuse him of bragging, considering his accomplishments, but I don't see why he gets his own featurette. Anyone? Bueller? Bueller?

The Lost Tapes (10m:13s) is my favorite piece, a jumble of old interviews with the cast goofing around. Broderick and Ruck discuss their friendship on and off screen, Broderick visits Jeffrey Jones in his trailer, and we see a snippet of a deleted scene being filmed (the kids ordering sweetbreads at the fancy restaurant, explaining the subsequent "we ate pancreas" line).

Finally, closing out the disc is a skimpy photo gallery.