PR: Private Romeo on DVD Jun 5 and Digital Early May 15

Get it Early on Digital May 15th 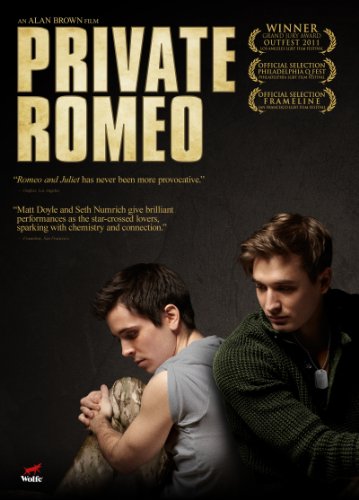 When eight cadets are left behind at an isolated military high school, the greatest romantic drama ever written seeps out of the classroom and permeates their lives. Incorporating the original text of Romeo and Juliet, YouTube videos, and lip-synced indie rock music, Private Romeo takes viewers to a mysterious and tender place that only Shakespeare could have inspired.
Private Romeo has a running time of 98 minutes and is not rated. The DVD will come packed with extras including Director's commentary, Behind the Scenes Featurette, Deleted Scenes, Facebook entries, trailer, closed captions and more.

Serving audiences since 1985, Wolfe is the largest exclusive distributor of gay and lesbian films. Current major Wolfe releases include the acclaimed gay drama, Undertow (Peru's submission for the 2010 Academy Awards) and the hard-hitting "Don't Ask, Don't Tell" drama, A Marine Story. Wolfe is also well known for releasing classics such as Desert Hearts, Big Eden and Were The World Mine. Find more info online at http://www.wolfevideo.com.