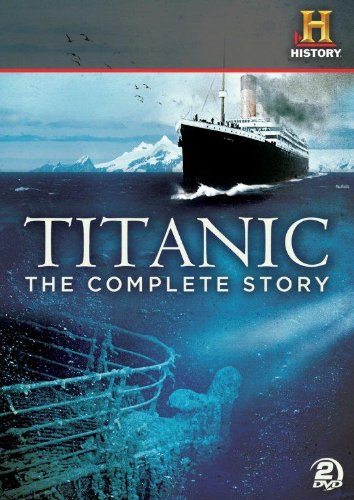 In this anniversary year, there has been more than the normal amount of material about Titanic in popular culture including a new mini-series and a re-release of James Cameron's popular Titanic film remastered in 3D. Titanic: The Complete Story is a fine dvd set and for those who have dreamt of and wondered about this ship. They will enjoy learning just a little bit more of this doomed journey and the people who you never get to hear about that died that fated night on April 15th one hundred years ago.

"An Iceberg straight ahead".

It was struck by a iceberg on April 14th late in the evening hours. It sank in the early morning of April 15th 1912. A loss of life that even today is not fully calculated. The rich and the poor, no one on that ship was spared the horror of that cold ocean water. Before that night was a dream. The RMS Titanic was to be the grandest ship ever built. The largest, the fastest, and the unsinkable.

The elite of Europe and America sailed on the Titanic and its first class splendor. The on April 10th,1912 the Titanic left Southampton Docks and sank into history. Some of the most prominent people of the day booked a passage aboard Titanic, traveling in First Class. Among them were the American millionaire John Jacob Astor IV and his wife Madeleine Force Astor, industrialist Benjamin Guggenheim, Macy's owner Isidor Straus and his wife Ida, and Denver millionairess Margaret "Molly" Brown. Along with the rich were the less so, with 284 people travelling in Second Class and 709 in Third Class, including 107 children.

The SOS is heard and a small few wait on news of the unsinkable ship listing in frozen waters of the Atlantic. In the last moments on that fated night we wonder about the survivors and what they witnessed: passengers jumping into the icy waters with no clue of what awaited them with the ship screaming as it was breaking in two and then sinking into the Atlantic. Those who survive watch the ship disappear as darkness descends and all that is heard is sounds of the remaining people screaming in freezing waters and dying.

The lifeboat survivors chilling re-telling the fear and horror of what had just happened. The accounts of the remaining crew and the struggle to remain calm. The tales tell of the horror found in the morning hours as the Carpathia arrived to look for survivors. Using newsreels, stills, diaries, and exclusive interviews with survivors, Titanic: The Complete Story evokes that fateful night and the passengers of the famous ship. Also there is an intriguing overview on the popular culture phenomenon that this tragedy has become. This set includes 3 feature-length programs:

Death Of A Dream--The largest ship ever built is christened in Ireland before a cheering crowd of 100,000. Witness the disaster this trek becomes as numerous iceberg warnings go unheeded and the ship sinks in the icy North Atlantic. This is the story of the creation and goals behind the building of the Titanic. It tells of the men involved and the thousands of hours in creating, building and launching Titanic for its first voyage Also told are the the problems along the way and the rush to get Titanic launched in time.

The Legend Lives On--Overpacked lifeboats edge away from the crippled liner as futile SOS signals flare into the night--leaving 1,500 passengers to a watery grave. Also, follow the later deep sea expedition that took the risks in attempting to reveal Titanic's tragic secrets.

These two specials together form companion pieces to one another and are comprehensive accounts that utilize survivor interviews, photos, written accounts, and newsreel footage to breathe life into the compelling story. From the early years of the century when the ship was created to the discovery of the wreckage in 1985 by Robert Ballard, these films by Melissa Jo Peltier make a great attemtp to tell the complete Titanic story. The first is mainly the story of the giant ship up until the sinking and the second concentrates on the aftermath.

Titanic's Achilles Heel --Elite divers explore the explosive theory that the doomed liner may have had a fatal design flaw--using advanced CGI technology for special effect recreations, archive documents and photographs, as well as footage from modern-day expeditions to bolster the other older documentaries.

Once upon a time, I picked up a book written in 1913. about the sinking of the Titanic. I found this book to be fascinating even even though I later found it be flawed in its telling of the story. But also, as time passed I became enthralled with the Titanic and its effect on the world for the 70 years since its sinking. I then was excited to learn it had been discovered three miles under the Atlantic and I was there watching as Telly Savalas shared with the world artifacts from the sunken ship.

What was missing from all those years of excitement was an overall picture of the Titanic and its sinking. After all this time was still the questions of the idea of it, the cost, the people behind it, and the people who died. This two disc set I recently watched, Titanic: The Complete Story managed to enthrall me once again to the myth and legend of The Titanic. It answers some of the missing questions I had. It made me once again see the horror involved for the passengers. I got to sense the excitement as the people waited to hear the results of the sinking and who died.