DVD Review: THE TROUBLE WITH TOLSTOY

"Tolstoy was a professional troublemaker. He troubled the conscience of Russia." - A.N. Wilson 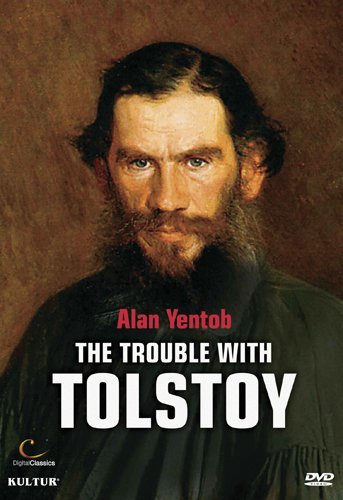 A challenging travelogue walks in the footsteps of Russia's biggest troublemaker.

The very characteristics that make Leo Tolstoy fascinating as man also make him virtually impossible to fully grasp. Looking at any single slice of his life would convey a wholly inaccurate impression. The soldier and war novelist became a committed pacifist. The sex-obsessed sensualist and inveterate gambler was, at other times, also an ascetic and virtual flagellant. Born to a noble family, he swore off private property and adopted a form of anarchism. These weren’t easy, gradual transitions; they were halting and changeable, and every bit as dramatic as one of Tolstoy’s novels. Our window into this complexity is aided and abetted by the sheer volume of autobiographical material left behind. War and Peace and Anna Karenina, his two best remembered works, certainly contain elements of biography, but his essays and explicit diaries are full of the types of raw insights that most of us would never, ever want scrutinized. Anything that you could ever want to know about Tolstoy, his life and philosophy can be known. The problem is sorting through it all.

It’s this complicated task that Alan Yentob sets himself in The Trouble with Tolstoy, from a 2011 set of episodes of his BBC One series Imagine. Yentob follows the life of Tolstoy in a somewhat literal fashion, by visiting the most important locations in his life and career, beginning at the rail station where Russians and the international media held vigil while Tolstoy lay dying. We visit his house at Yasnaya Polyana, which annually hosts a reunion of the scores and scores of surviving Tolstoy descendants (suggesting that abstinence was not the defining element of his later philosophy). Through Yentob’s recreation of Tolstoy’s travels, we visit sites of war, the forbidding Russian steppes, and sites of splendor like St. Petersburg. The climax is a moving and revealing recreation of Tolstoy’s final weeks, during which he abandoned his home and family. It’s a travelogue for the most angst-y vacation you’d ever care to take. As an attempt to come to grips with the many contradictions of Tolstoy’s life and philosophy, it’s extraordinarily effective. Tolstoy's lived at the birth of the modern era, so there is much surviving film and photography which Yentob's team makes good use of, along with lovely contemporary footage well-presented on the DVD. Certainly, it’s tough to understand any important figure without knowing a bit about where they came from, and late-nineteenth-century Russia is as much of a crucible as any place and time. Take Tolstoy out of his context, and it’s hard to know what would be left.

By looking back, Yentob also moves toward an understanding of what has made Tolstoy so problematic a figure for Russians in the century since his death. The novels may remain widely read, but his popularity with the peasant class (Russia’s 99%), Christian-pacifist philosophy, and well-known anti-authoritarian streak made him tricky for the Bolsheviks, dangerous to the Soviets, and awkward for the modern-day government of Russia. Yentob reminds us that the recent centennial of Tolstoy’s death went almost entirely unremarked-upon by Russian leaders, and it’s perhaps not hard to see why. Popularity and an anti-establishment bent have always been an explosive combination, and Tolstoy is likely to remain as troubling a figure as he was in his own time.