(2010), a funny and perceptive examination into the subculture of big, beefy, burly gay men, on DVD. With an SRP of $19.95, this fascinating doc will become available to the general public on June 5, 2012. 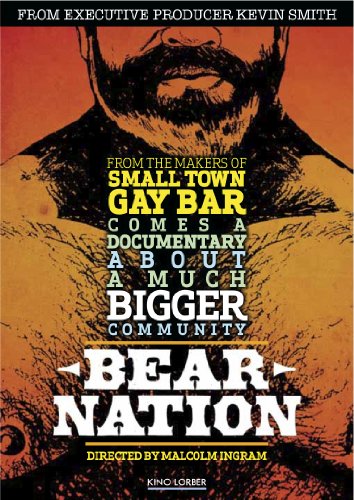 After premiering at SXSW in 2010, Bear Nation

reveals an intimate side of men who identify themselves as Bears.

"Malcolm is absolutely one of my dearest, best friends and I love him to death," said Executive Producer Kevin Smith. "Bear Nation

is about dudes who are as big as me, sometimes bigger, hairier, strong-looking, truck driver types who fuck dudes that aren't as big as them, and Malcolm has educated me on this. He found a specialized community within the gay community that catered to dudes of his size and he was always trying to sell me on it as well, cause, you know, I'm fat. But all kidding aside, Bear Nation is really worth seeing."

Director Malcolm Ingram
"I am completely thrilled that Bear Nation has found a home amongst the impressive roster of diverse, important and entertaining films at Kino Lorber," wrote director Malcolm Ingram. "At a time when distribution is in such flux and getting stories out there gets increasingly more difficult ... it is a privilege to team with such an innovative company that obviously cares deeply about film."

Filmmaker Malcolm Ingram (Small Town Gay Bar, Drawing Flies), a self-identified Bear, offers a look at the lives of big guys who love other big guys in this documentary. The film features interviews with musician Bob Mould (Huesker Due, Sugar) and Kevin Smith, among many others.

While the LGBT community has long had to struggle with stereotyping by outsiders, gay men also have to deal with widely held perceptions from their peers that they're supposed to fit a certain image -- men who are stylish, carefully groomed, trim and to a certain degree effeminate. But not all gay men fit this profile.