"People who write books take as much punishment as prizefighters." - Norman Mailer 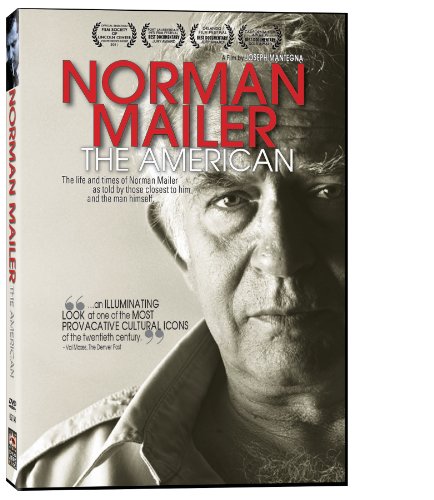 This is an often unpleasant tale of a celebrated writer that is told frankly and openly by people who knew him personally. Director Joe Mantegna weaves their commentary into a visual history of the latter half of the last century and evokes an intriguing portrait of one its most important chroniclers. Norman Mailer: The American gives a multi-faceted answer to the question: who was that guy?

Norman Mailer: The American is a relatively short but reasonably dense telling of the life of one of the most notorious writers of the Twentieth Century. This documentary deserves a great deal of credit for several things. I did learn some things about Mailer that I did not know, although most of it was not very pleasant. The story moved briskly within the historical context and had moments of real suspense. The weaving of historical archival footage and various video recordings of Mailer himself was very artistically accomplished.

Director Joe Mantegna has done an excellent job of presenting a certain portrait of Mailer. In this film we find extended interviews with his wives and some of his children which creates a strange dichotomy of the wild man husband and somewhat loving father. This is interspersed with bits and pieces of Mailer's public history, his book, his interviews, his crimes and American history, World War II, the Vietnam War, Kennedy and Nixon. Also includes are some clips and discussion of some awful films that Mailer created in the Sixties, including a crazed sequence with actor Rip Torn.

Mailer was a confrontational writer taking on topics and themes that were often shocking, especially with his no-holds-barred style and egotism. This film does a good job in capturing the self-love of Mailer from his recorded comments about himself to the stories told by his wives, friends and biographers. It is intriguing as his wife wife Adele describes the event that weaves its way through this film and the mythology of Mailer: the stabbing of her at a party by Mailer. This violent edge of Mailer clings to his art with his fascination with boxing, war, and murder.

Although it is hard to say that Mailer is the greatest American writer of last sixty years, he is certainly on the list and there is not much here in the way of literary experts to vouch for it. Telling Mailer is quoted in one clip recorded very late in his life stating that a writer was "defined by his detractors." I was bummed that two of my favorite Mailer books, Ancient Evenings and Oswald's Tale didn't even rate a mention. I remember when his Marilyn book came out and took the nation by storm. People shelled out big bucks for this large format essay with photographs fo the dead star. This film include a few interesting tidbits about that and other writings of Mailer's from their genesis to critical reaction.

Ultimately the film is too short which certainly makes the DVD less desirable. I would suppose that someone who was into Mailer might want this in their collection. I wouldn't rate it's "re-watchablility" level as very high. Certainly worth a rental if you want to get a quick hit about who this guy is, what did he do and why do people still talk about him. Ultimately, I think it is destined to become a piece of digital Cliff Notes for future English students, looking for a more intimate, yet superficial study of the author.

Extras: Six clips of Mailer addresses the topics of Campaigning and Computers from The Dick Cavett Show, Writing Process apparently filmed on a ferry for some documentary, Power from an interview, Success and Space Program and more from The Dick Cavett Show. It always seems a shame that discs like this does extend their utility in a collection by including more material for exploration.