Contrary to the popular belief that the Pilgrims first landed in Plymouth in 1620, they in fact, initially arrived in Provincetown Harbor, Massachusetts. From the beginning Provincetown, commonly known as "PTOWN," has been recognized for its beaches, its art-inspiring beauty and its booming tourism industry. This premier vacation destination has especially attracted people of the LGBT community due to its openly gay-friendly environment.

"Provincetown is the freest place in America." - Norman Mailer

Featuring: Pulitzer Prize-winning authors Norman Mailer (The Executioner's Song) and Michael Cunningham (The Hours) and many more of Provincetown's most infamous residents. 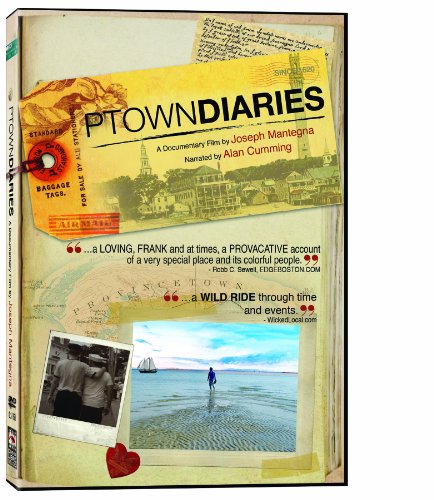 AVAILABLE ON DVD AND DIGITAL PLATFORMS JUNE 5, 2012
LOS ANGELES (April 26, 2012) - Contrary to the popular belief that the Pilgrims first landed in Plymouth in 1620, they in fact, initially arrived in Provincetown Harbor, Massachusetts. From the beginning Provincetown, commonly known as "PTOWN," has been recognized for its beaches, its art-inspiring beauty and its booming tourism industry. This premier vacation destination has especially attracted people of the LGBT community due to its openly gay-friendly environment. On June 5, 2012, Cinema Libre Studio will take you on a tour of this fascinating corner of America in Ptown Diaries

, a documentary that pays homage to Provincetown's captivating history and illuminating present, available on DVD and digital platforms nationwide.

explores the many colorful entities that create this odd little community located at the extreme tip of Cape Cod. With a prosperous harbor and a bustling tourist area on Commercial Street, this thriving artists' town has been a mecca for creative people since 1899 when Nathaniel Hawthorne first arrived. Since then, PTOWN has been populated by notable visionaries such as; Tennessee Williams, Eugene O'Neill, John Waters, Jackson Pollack, Norman Mailer, Michael Cunningham and many more.

is an insider's guide to what to expect when visiting this special place. Everyone, regardless of race, creed or sexual orientation, is greeted with a welcoming embrace. To help entice visitors, there are numerous events every year to accommodate individual groups. 'Family Week' is very popular for same-sex couples who want to vacation with their children; 'Swim For Life' is annual fundraiser that has been taking place for over 20 years, with all its proceeds benefitting AIDS, Women's Health and the Provincetown community. There are also some wild weeks devoted to the more alternative guests including; 'Bear Week,' which caters to larger, hairy, gay men for an enjoyable week of fun activities. Lastly, and perhaps most entertaining of all is 'Carnival Week,' where the best of PTOWN gather for an end-of-summer farewell.

Massachusetts is one of the few states in the U.S. where gay marriage is legal and most importantly, widely accepted. PTOWN has become a symbol of freedom where you are free to live your life any way you wish.

is a fascinating documentary that chronicles the amazing history of a small Massachusetts town and its evolution from the Pilgrims' puritanical origin to the beginning of a community of unparalleled cultural and personal freedom. It delves seamlessly into the town's progression as the first artists' colony in the U.S. - from the arrival of Eugene O'Neil to the groundbreaking work of Tennessee Williams. Embracing Provincetown's eccentric and rich heritage, Ptown Diaries

deftly weaves the stories of New England Yankees, Portuguese fisherman, bohemian artists and many others into a single, mesmerizing history of the magnificent landscape known as "Land's End."

More information can be found at http://www.ptowndiaries.com/


ABOUT CINEMA LIBRE:
Cinema Libre Studio is a leader in distributing social-issue documentaries and features by passionate filmmakers. Headquartered in Los Angeles, the Cinema Libre team has released over one hundred films including the Sundance Audience Award-Winning FUEL, THE END OF POVERTY?, and Oliver Stone's SOUTH OF THE BORDER. The studio is developing John Perkins' best-selling memoirs, CONFESSIONS OF AN ECONOMIC HIT MAN, into a major motion picture.