Evidence collected at crime scenes -everything from fingerprints to bite marks - is routinely called upon in the courtroom to prosecute the most difficult crimes and put the guilty behind bars. And though glamorized on commercial television, in the real world, it's not so cut-and-dried. A joint investigation by FRONTLINE, ProPublica and the Investigative Reporting Program at UC Berkeley examines the reliability of the science behind forensics.

LEARN HOW FORENSICS, WITH FEW UNIFORM STANDARDS AND UNPROVEN SCIENCE, CAN UNDERMINE THE SEARCH FOR JUSTICE IN 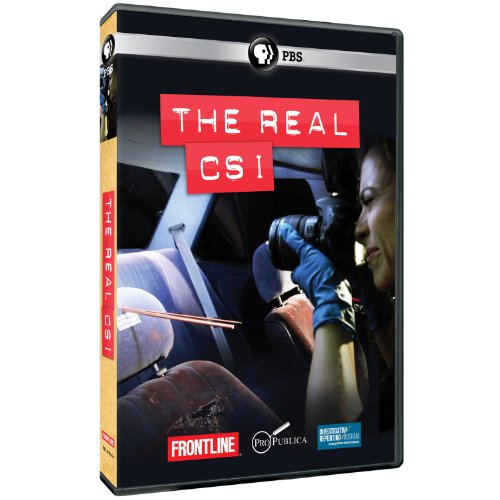 on DVD. Evidence collected at crime scenes -everything from fingerprints to bite marks - is routinely called upon in the courtroom to prosecute the most difficult crimes and put the guilty behind bars. And though glamorized on commercial television, in the real world, it's not so cut-and-dried. A joint investigation by FRONTLINE, ProPublica and the Investigative Reporting Program at UC Berkeley examines the reliability of the science behind forensics in Frontline: The Real CSI

FRONTLINE correspondent Lowell Bergman finds serious flaws in some of the best-known tools of forensic science and wide inconsistencies in how forensic evidence is presented in the courtroom. From the sensational murder trial of Casey Anthony to the credentialing of forensic experts, Bergman documents how a field with few uniform standards and unproven science can undermine the search for justice. Frontline: The Real CSI

Program Synopsis
The investigation follows a landmark study by the National Academy of Sciences that called into question the tenets of forensic science. For the first time, Harry T. Edwards, a senior federal appellate court judge and co-chairman of the report, sits for an interview to discuss what the report means. He tells FRONTLINE that these television dramas often exaggerate or misrepresent the reliability of forensic evidence, including one of the most called-upon of the forensic techniques, fingerprint identification.

"If what some people are saying, it works because we've gotten convictions, ... that's not proof that the discipline is undergirded by serious science," Edwards tells FRONTLINE. "It's been inaccurate and wrong for many years. It doesn't become better because it's many years. It's just many years of doing it incorrectly. ... And the stakes are too high. When you're talking about prosecution, incarceration, the stakes are too high.

In this hour, FRONTLINE also examines one of the most high-profile terrorist investigations since 9/11: the case of Brandon Mayfield, an attorney who was wrongfully identified and arrested as a suspect in the Madrid commuter train bombings after the FBI erroneously matched his fingerprint to a partial print found at the scene. The case exposed the weaknesses of fingerprint identification, causing the FBI to change the way its examiners testify about the reliability of forensic fingerprinting. Bergman interviews the fingerprint expert selected by Mayfield's defense, the independent examiner Ken Moses, who concluded it was a positive match for Mayfield, but later admits that he and the three other examiners who looked at the prints were wrong. The Mayfield case highlights the weak link in fingerprint analysis - the examiner, whose work is not done by a computer, as seen on TV, and can be influenced by unconscious bias.

In the small town of Brooksville, Miss., FRONTLINE explores the errors that led to the convictions of two innocent men, whose convictions in part were based on faulty bite-mark testimony. "There have been a number of people who were convicted based on bite-mark testimony, who were sent to death row or sent to prison for life," says Neufeld. "And in each of those cases, a whole group of forensic odontologists, or dentists, said they were absolutely certain that this was the guy, ... and they were absolutely wrong."

Nowhere in recent history has forensic evidence been more prominent than in the trial of Casey Anthony, who was acquitted of the first-degree murder of her 2-year-old daughter, Caylee Anthony. Based on a smell from the trunk of Casey Anthony's car and using an expert in "the odor of the dead," the prosecution set out to convince the jury that the stench was that of a decaying body. In total, 37 expert witnesses from more than a dozen areas of forensics testified, with the defense challenging with forensic experts of their own. "This case utilized every single type of forensic science. ... They threw a bunch of stuff against the wall, and they were hoping something would stick, and none of it did," says defense lawyer Jose Baez.

FRONTLINE also examines what it takes to become credentialed in forensics by the American College of Forensics Examiners International (ACFEI). "It was like an open-book exam basically, and I passed," says Leah Bartos, a journalism graduate student at UC Berkeley, who demonstrates that for $660 and a few hours taking an open-book exam online, she became certified as a forensic consultant by ACFEI. Bergman's interview with former CEO John Bridges indicates that 99 percent of those who apply online will become certified by the organization. "There can be no meaningful exam that has a 99 percent pass rate," admits forensic guru and ACFEI spokesman Cyril Wecht, whose signature appears on ACFEI certificates.

is a FRONTLINE production in collaboration with ProPublica and the Investigative Reporting Program at UC Berkeley. "THE REAL 'CSI'" is part of an ongoing look at forensic science that has engaged FRONTLINE and its partners over the last two years. The producers and writers are Andres Cediel and Lowell Bergman. The correspondent is Lowell Bergman. The reporter for ProPublica is Leah Bartos. The series senior producer of FRONTLINE is Raney Aronson-Rath. The executive producer of FRONTLINE is David Fanning.

About ProPublica
ProPublica is an independent, nonprofit newsroom that produces investigative journalism in the public interest. In 2010, it was the first online news organization to win a Pulitzer Prize. In 2011, ProPublica won the first Pulitzer awarded to a body of work that did not appear in print. ProPublica is supported primarily by philanthropy and provides the articles it produces, free of charge, both through its own website and to leading news organizations selected with an eye toward maximizing the impact of each article. For more general information, please visit www.ProPublica.org.