Across two terrifying DVDs slither four B-movie classics sure to make you shiver - even with the lights on! This is the newest installment in the Scream Queen's MOVIE MACABRE DVD library.

RUN FOR YOUR LIVES WITH THIS FRIGHTFULLY FUNNY QUADRUPLE-FEATURE OF B-MOVIE CLASSICS FROM THE MISTRESS OF THE DARK!

. Across two terrifying DVDs slither four B-movie classics sure to make you shiver - even with the lights on! This newest installment in the Scream Queen's MOVIE MACABRE DVD library, priced to collect at $19.98srp also features two DVD-exclusive episodes never before seen on TV! 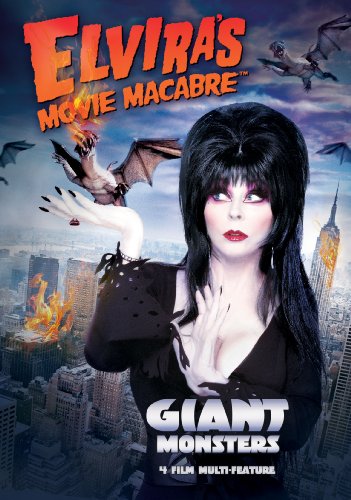 Disc One features The Giant Gila Monster (1959) about a monster of unknown origin stalking a small Texas town in search of fresh teenagers to devour! A monster-sized bash filled with rock 'n' roll, hot rods, poodle skirts, and Greyhound bus-sized prehistoric lizards adds up to loads of frightening fun! Also enclosed is 1959's Teenagers from Outer Space, a no-budget wonder following the terrifying tale of aliens who plan to use the Earth as grazing land for their lobster-like monsters, the Gargons. But when the teen son of the leader rebels against using a civilized world, he's hunted down with laser death rays! Disc Two contains two new-to-DVD features never before seen on TV: Attack of the Giant Leeches (1959), which, as one might imagine, features outsized bloodsuckers terrifying the Florida Everglades and Monster from a Prehistoric Planet (1967) which finds Tokyo being terrorized by Gappa, a Godzilla-like triphibian.