"I don't have to run away from anything, because I don't believe in anything." - Hazel Motes (Brad Dourif) 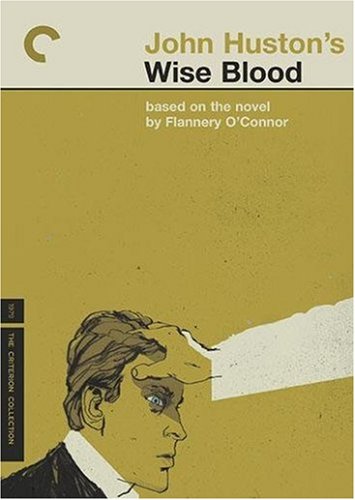 The fiction of Flannery O'Connor, the emblematic texts of the Southern Gothic, would seem to resist adaptation to filmˇthere's something about the image of O'Connor as the sweet little old Southern lady, talking and writing in her oh so sweet voice, and describing stuff that's just lunatic and disturbing, that makes for an extraordinarily discordant and energetic literary experience. (In movies, this stuff tends to go right at the lurid, with films like Suddenly Last Summer.) But O'Connor's sensibility is well suited to John Huston's, it turns out, and this late-career turn from one of the great American directors (before the heavy somberness of even later movies, like The Dead, brimming with intimations of mortality) is a terrific and jarring version of one of O'Connor's most highly regarded books.

Initially you may fear that Huston takes it all as a great jokeˇhe himself appears as a fire-and-brimstone preacher, his name in the credits appears with a studious typographical error ("Jhon Huston"), and an opening sequence in a graveyard seems to revel in the stereotypical dimness of much of the South, lingering over a gravestone which reads, "Gone To Become An Angle." (Then again, perhaps a geometry teacher is in that grave.) But it's clear that Huston embraces the material at face value, and gives a stern and clean telling of the story of Hazel Motes, recently discharged from the Army who doesn't care to speak about the anatomical location of his war wound, and becomes entranced by the streetcorner preaching that's so much a part of O'Connor's vision of daily life. It's easy to sketch out a crude Freudian psychological profile of Hazel, a mixture of post-traumatic stress disorder, repression, abandonment, and that old-time religion, but happily neither O'Connor nor Huston go in for such by-the-numbers stuffˇinstead, we see Hazel take his mad journey, with a certitude that would be inspiring if it were based on anything other than fumes.

The film is really all about how the grotesques intersect with the rest of the mundane world, and though most of its characters are people of the cloth, it takes religion as a carny show or a confidence gameˇand this is where the performers shine. Harry Dean Stanton is mesmerizing as a mean old cuss shamming blind for preaching purposes, and even better is Ned Beatty, who knows an opportunity for passing the hat when he sees one, and he sure does see one in Hazel. Brad Dourif as Motes is asked to hold the whole movie together, and it's a sinewy and strange performanceˇDourif is as convincing showing us Hazel's certitude as he was in conveying all of Billy Bibbitt's doubts and second guesses, but still, Motes is a man unmoored, as you can tell by the name of the religious institution he hopes to found: The Church Of Christ Without Christ.

There are actually more than a few parallels between Hazel and Clyde Barrowˇour man here uses religion rather than crime as compensation for other dysfunctions, even as he learns that it's all about show business. And even the devout among us have got to be enchanted by a movie that features so prominently George the Jungle Monarch, a guy in an ape suit giving a merry thrill to the kids going to the Saturday matinee.

Criterion's transfer is stellar, especially given how poorly some of the color pictures of the late 1970s have fared, and the extras package is pretty reasonable as well. It features new interviews with Dourif (focusing on Huston), writer/producer Michael Fitzgerald and writer Benedict Fitzgerald (focusing on O'Connor); Miss O'Connor herself, reading one of her most famous stories, A Good Man Is Hard To Find(billed as the only recording the writer reading her own work), and a 1982 Bill Moyers interview with Huston, a career overview that's brief, but is particularly interesting concerning the director's father, Walter.