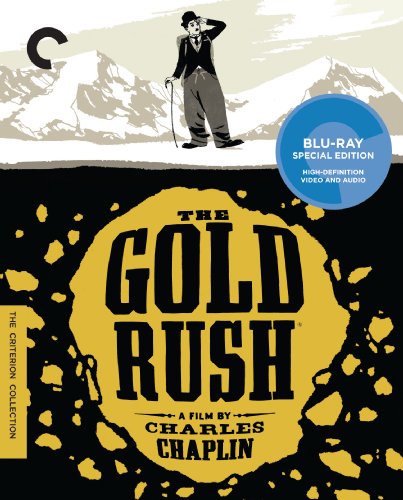 I'm ashamed to say I'm never seen a movie either starring Charlie Chaplin or directed by him. What better way to finally break the seal on this cinema legend than with what many consider to be a comedic masterwork.

I’m still in shock that I’ve never (until now, that is) seen a Charlie Chaplin movie. All of these years of exploring countless genres of cinema spanning each and every era, and somehow the path leading to Chaplin eluded me. Aside from random clips on an Oscars telecast or some film retrospective show, I’ve never seen a minute of City Lights or Modern Times, and I never even took in Robert Downey Jr’s portrayal of the legend in the Chaplin biopic. All of that finally changed thanks to this wonderful, new Criterion Collection Blu-ray release of one of Chaplin’s finest, The Gold Rush. Containing both an amazingly well-restored version of the original, 1925 cut, as well as the 1942 version that Chaplin cut himself following the success of his film, The Great Dictator, this is almost certain to go down as one of the best home video releases of 2012.

It’s the beginning of the Klondike gold rush, circa 1898, and a pair of prospectors is searching for gold in a remote, snowy area of Alaska. One of them, The Tramp (Chaplin), stumbles upon a cabin inhabited by Black Larsen (Tom Murray), a man with a bounty on his head. Larsen boots The Tramp out of his cabin immediately, but a strong wind blows him right back in. The other prospector, Big Jim (Mack Swain), happens upon to Larsen’s cabin as well, and he receives the same, inhospitable eviction. Big Jim lives up to his name, though, and it isn’t long before this newly formed trio is sharing the cabin, living in something far removed from domestic bliss. Larsen eventually goes out to find food, and winds up getting into some serious trouble instead, then finds some gold belonging to Big Jim, who, back in the cabin, starts having hallucinatory visions of The Tramp as a chicken that looks good enough to eat. After escaping the madness of Larsen’s cabin, The Tramp winds up in a town where he meets Georgia (Georgia Hale), whom he falls in love with. After meeting the love of his life, The Tramp now has even more inspiration to find gold and become wealthy enough to start a life with Georgia.

There’s no doubt that The Gold Rush earns every ounce of its distinction as a “classic” or “masterpiece,” but there’s some edgy, even surreal stuff that one wouldn’t necessarily expect from a film originally shot back in 1925. When The Tramp arrives at Larsen’s cabin, some classic, silent-film-era-slapstick occurs, lulling us into the false belief that we’re in for a typical, safe piece that will surely be entertaining and funny throughout. It isn’t long after Big Jim’s arrival that the weirdness begins. In a relatively short time span, Black Larsen kills two people, Big Jim is hallucinating about humans being animals, and a major character dies, tragically, before the halfway point. This daring bit of storytelling shows Chaplin’s true genius as a writer and director, as he brilliantly crafted The Gold Rush to give the majority of his fan base what they’ve come to expect from his films (the slapstick comedy element), while at the same time, staying true to his artistic vision with the slyly subtle, edgy stuff.

It’s a huge plus to have both the 1925 and 1942 versions of the film in one, fantastic package. I won’t tip my hand as to my preference between the two, so as to further convince you to check out them both and decide for yourself. It might seem redundant to view both in one sitting, but, rest assured, making a double-feature event out of it will prove to be refreshing, and far more engaging on multiple, unexpected levels. The two versions are presented in their original 1.33:1 aspect ratio and in 1080p, but the overall video quality is great for both. The 1942 version looks slightly more impressive, due largely to the newer, better-preserved source material. This leads to slightly better handling of black levels, contrast levels, and less compression artifacts, but the 1925 film is no slouch in those departments either, and both cuts offer image and clarity and detail that we rarely see from a movie from the silent film era. The audio mixes are quite different in nature, though, as the 1925 cut sports a DTS-HD 5.1 Master Audio mix, and the 1942 cut offers the sound in LPCM 1.0, with both allowing The Gold Rush to sound better than anyone thought it ever could.

The extras collection begins with an audio commentary track for the original 1925 cut of the film. This features Jeffrey Vance, a Charlie Chaplin biographer, and was newly recorded for this release in 2012. There’s also Presenting The Gold Rush, a 15-minute piece that focuses on the reconstruction of the 1942, sound version of the film by filmmakers David Gill and Kevin Brownlow. We hear from Brownlow and, again, Jeffrey Vance, as they talk about working with so few surviving pieces of the film, yet still managing to pull off an amazing feat. Chaplin Today: The Gold Rush is a 2002, 27-minute documentary by director Serge Le Péron that focuses on the making of the film via interviews with Mary Pickford, Georgia Hale, and filmmaker Idrissa Ouédraogo. There’s also A Time of Innovation: Visual Effects in The Gold Rush, a 19-minute interview with visual effects expert Craig Barron, during which he looks at the creation of the classic set pieces in the film and what special effects techniques were used. Music by Charles Chaplin is a 24-minute interview (recorded for this release in 2012) with classical music composer and conductor Timothy Brock, who talks about Chaplin’s self-composed film scores, as well as Brock’s own work, which mostly consists of reconstructing Chaplin’s scores and conducting them for live audiences. We finish the collection up with four trailers for The Gold Rush, tailored for the film’s release in England, France, Germany, and the Netherlands.