Will Ferrell plays a simple Mexican who is proud to work on his father's ranch. But when the ranch is threatened by a dangerous drug lord played by Gael Garcia Bernal, he must protect what he cares for the most. 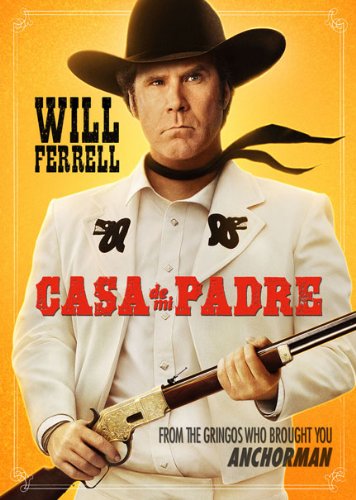 will be arriving on Blu-ray Disc, DVD, Digital Download and On Demand on July 17, 2012.

From the gringos that brought you Anchorman: The Legend Of Ron Burgundy comes the slapstick, action comedy, Casa de Mi Padre

, arriving on Blu-ray Disc, DVD, Digital Download and On Demand on July 17, 2012. Producer and star Will Ferrell, along with director Matt Piedmont, writer/producer Andrew Steele and producer Adam McKay, best known for their work on "Saturday Night Live," takes audiences on a memorable, wild (west) ride.

Will Ferrell plays a simple Mexican who is proud to work on his father's ranch. But when the ranch is threatened by a dangerous drug lord played by Gael Garcia Bernal (A Little Bit of Heaven, Babel), he must protect what he cares for the most.The film also stars Diego Luna (Dirty Dancing: Havana Nights), Genesis Rodriguez (Man on a Ledge), Efren Ramirez (Crank 2, HBO's "Eastbound and Down") Adrian Martinez (Kick- Ass) with Pedro Armendariz Jr. (Once Upon a Time in Mexico) and Nick Offerman (TV's "Parks and Recreation"). The Blu-ray Disc and DVD special features include a "making of" featurette, deleted scenes, "Fight for Love" music video, commerciales and audio commentary with director Matt Piedmont, writer/producer Andrew Steele and star Will Ferrell. Casa De Mi Padre will be available on Blu-ray Disc and DVD for the suggested retail price of $24.99 and $19.98, respectively.

SYNOPSIS
Armando Alvarez has lived and worked on his father's ranch in Mexico his entire life. When the ranch begins to struggle with its finances, Armando's younger brother Raul (Luna) comes to the rescue and brings his beautiful fiancee, Sonia (Rodriguez). Raul is a successful international businessman, who shows promise for helping save the ranch; but when Armando falls for Sonia and Raul's business dealings turn out to be shady, the Alvarez family finds themselves in a full-out war with each other and with Mexico's most feared drug lord, Onza (Bernal). The film is written by Andrew Steele and directed by Matt Piedmont.

ABOUT LIONSGATE
Lionsgate is a leading global entertainment company with a strong and diversified presence in motion picture production and distribution, television programming and syndication, home entertainment, family entertainment, digital distribution, new channel platforms and international distribution and sales. The Company has built a strong television presence in production of prime time cable and broadcast network series, distribution and syndication of programming and an array of channel assets. Lionsgate currently has 15 shows on more than 10 networks spanning its prime time production, distribution and syndication businesses, including such critically-acclaimed hits as the multiple Emmy Award-winning "Mad Men", "Weeds" and "Nurse Jackie" the Golden Globe-winning drama "Boss" and the syndication successes "Tyler Perry's House Of Payne", its spinoff "Meet The Browns", "The Wendy Williams Show" and "Are We There Yet?".

Its feature film business has been fueled by such recent successes as THE LINCOLN LAWYER, TYLER PERRY'S MADEA'S BIG HAPPY FAMILY, THE EXPENDABLES, MARGIN CALL, THE LAST EXORCISM and the critically-acclaimed PRECIOUS, which won two Academy Awards. With the January 2012 acquisition of Summit Entertainment, the Company now has the two leading young adult franchises - the blockbuster TWILIGHT SAGA, which has grossed more than $2.5 billion at the worldwide box office, and the HUNGER GAMES franchise, whose first film will be released on March 23. Recent Summit hits include RED, LETTERS TO JULIET, KNOWING, the STEP UP franchise and the Academy Award winning Best Picture THE HURT LOCKER.

Lionsgate's home entertainment business is an industry leader in box office-to-DVD and box office-to-VOD revenue conversion rate. Lionsgate handles a prestigious and prolific library of approximately 13,000 motion picture and television titles that is an important source of recurring revenue and serves as the foundation for the growth of the Company's core businesses. The Lionsgate and Summit brands remain synonymous with original, daring, quality entertainment in markets around the world.