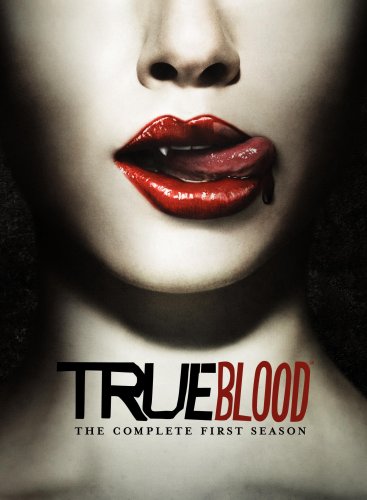 Six Feet Under creator Alan Ball stretches metaphor to the breaking point with HBO's True Blood, which posits that a world in which vampires "come out of the coffin" and fight for their civil rights would look a lot like Twilight, only with lots more nudity. Lots and lots more nudity.

The other based-on-a-book vampire romance of 2008, HBO's True Blood, writer/director Alan Ball's follow-up to Six Feet Under would seem to reaffirm that, nope, there's nothing interesting about an undying bond between dreamy vampires and the idiots who love them.

An adaptation of the Southern Vampire Mysteries by Charlaine Harris, True Blood is set in the swampy Louisiana town of Bon Temps, where a dull, unlikeable waitress (young Sookie Stackhouse, played by New Zealander Anna Paquin, whose N'awlins accent has not improved) meets an aged, figuratively defanged vampire (the 173-year-old Bill Compton, played by Stephen Moyer, who talks nothing like Sookie, but nothing like a Louisiana native, either). The two fall instantly into the throes of passion for inexplicable reasons that are nevertheless excruciatingly over-explained in turgid romantic confrontations. Sookie is a psychic, and none to happy about it; she likes Bill because she can't overhear his thoughts. He likes her because that's what it says in the script.

But it's not really fair to judge the show based on the unfortunate main characters when so much of it is much more compelling (hold on though the early episodes, which threaten to focus almost exclusively on the insipid Twilight-mirroring romance). For one, it's simply fun to wander the world Ball creates, one in which bloodsuckers are just another racial minority. With the invention of synthetic blood, vampires, long relegated to the shadows, have "come out of the coffin" and admitted their existence to the world in a bid for civil rights. There's nothing to fear when a six-pack of TruBlood can be purchased at the local convenience store! The obvious metaphorical correlation is gay rights, but it never goes much deeper than the many humorous riffs that provide background detail&#8212campaigns for the Vampire Rights Amendment, vampire bars, anti-vamp religious commentators and churches plastered with signs like "God hates fangs."

If you think about it longer than the two minutes the show devotes to it, the vampire rights angle doesn't make much sense, as every vampire we see seems to outright despise humans (in a late episode, a member of their secretive governing body even describes a human victim in much the same way you might talk about the cow you're trying to justify having for dinner). If vampires want equal rights, they maybe should stop murdering people? It's like the Christian Right view on Proposition 8, but instead of equality leading to schoolchildren being taught that gay marriage is perfectly natural, it leads to people being hung upside down in bathrooms so their blood drains out faster.

The show is far too enamored with sex, drugs, and sordid plotting to worry about making a coherent sociological argument anyway. Which is fine—there's plenty else to enjoy, including a supporting cast a lot more interesting than the major players. Grandma Stackhouse (Lois Smith) invites Bill, a Civil War veteran, to speak at the local historical society. Sookie's boss, Sam (Sam Trammell), owns the bar where she works and is a better romantic foil than Bill (too bad he gets to do little more than support the central love triangle), but her co-workers are a lot more fun, especially the troubled Tara (Rutina Wesley), who resorts to an exorcism to deal with her alcoholic mother, and jack-of-all-trades Lafayette (Nelsan Ellis), who keeps busy as a short-order cook, a gay prostitute, and a drug dealer selling V—vampire blood, taken as a drug, apparently combines the best of LSD, marijuana, and Viagra. The pleasures of V are more than enough to tempt Sookie's brother Jason (Ryan Kwenten), who needs a lot of distraction over the course of the season as he's implicated in a series of murders involving women who willingly had sex with vampires (affectionately known as "fangbangers").

The ongoing murder mystery provides a hook for the season, but it's a rather lazy arc, piling up too many corpses and killing off likeable characters too quickly. Every episode ends with a cliffhanger, but everyone seems to start each show with a blank slate, unaffected by the life-altering horrors they suffered just last week. Sookie finds a blood-spattered corpse in her kitchen but spends the rest of the episode moping about her relationship problems. Bill strives to be accepted among humans but is more than happy to head out with some old vampire pals for a night of taste-testing the local bloodsucker sycophants. One character goes from mourning her dead husband to joking and laughing with the person who beheaded him in the span of a few minutes.

Maybe it's intentional. Despite a high class sheen and great production values, a lot of elements—the murder mystery; the exploration of vampire culture (replete with clich&eacutes, from leather-clad killers to the effete, laconic leaders); the Sookie/Bill/Sam triangle; the constant, laughably graphic sex scenes&#8212feel cheap, overloading on the melodrama and Southern Gothic atmosphere to the point where it's difficult to figure out how seriously we're supposed to be taking them. Which is why it's best to just not take the show that seriously at all. The strategy makes it easier to appreciate the good storylines&#8212Jason and his loopy vegan girlfriend (Lizzy Caplan) kidnap a meek vampire accountant (<b><a href="displaylegacy.php?ID=8082">Office Space</a></b>'s Stephen Root) with plans to harvest his blood&#8212and giggle through the stupid ones (a dose of V gives Jason an unwelcome case of priapism). <br><br> As addictive as it is, the show is a disappointment from Alan Ball, whose celebrated <b><i>Six Feet Under</i></b> occasionally suffered from the same plot excesses but at least felt populated by real, well-rounded people. <b>True Blood</b> seems perfectly content to revel in its genre elements, and the cumulative effect of so much trashy entertainment left me feeling a little... drained. <br><br> <b>The DVD:</b> HBO is pushing this set out in advance of the season two premiere in June, and the five-disc collection feels a little rushed, extras-wise, but the technical details are certainly killer. <br><br> I haven't seen the show in HD, but I can't say I'm too disappointed by the transfer on the standard definition DVDs (the series is, of course, also available on Blu-ray). It's a very dark show, but the majority of those dim scenes come off well, with excellent shadow detail and deep blacks. Some night scenes look very grainy, but it's fleeting. Brighter scenes are crisp and detailed. <br><br> The 5.1 audio does a great job adding to the Southern Gothic atmosphere. Dialogue and music dominate the front soundstage, but the surrounds are used frequently to offer subtle details&#8212particular in swampy outdoor scenes. <br><br> If you're interested in learning about how the show was conceived and created, you'll have to be content with a half-dozen audio commentaries from the cast and crew, including series creator Alan Ball; writers Nancy Oliver and Brian Buckner; directors Michael Lehmann, Dan Minahan, Marcos Siega, and Scott Winant; and actors Stephen Moyer and Anna Paquin. <br><br> Disc 5 includes the fun stuff&#8212a bunch of fake ads, PSAs, and "news segments" that were a part of a viral marketing campaign. The U.S. and French ads for TruBlood are clever, and I like the vampiric spoof of Match.com's marketing campaign, but the 15-minute news magazine mockumentary <i>In Focus: Vampires in America</i>, a look back at how vampires "came out of the coffin," manages to be more entertaining than the show. The guy playing the reporter has the Stone Phillips Stare down pat. </p><p class="credit" align="right">Joel Cunningham May 24, 2009, 9:04 am</p></p></div> </div> </section> <footer><p class="foot"><a href="ducu.php">Home</a> | <a href="r-reviews.php">Review Vault</a> | <a href="r-inteviews.php">Interviews</a> | <a href="r-articles.php">Articles</a> | <a href="r-apps.php">Apps</a> | <a href="r-about.php">About</a> | <a href="mailto:webmaster@digitallyobsessed.com">Contact</a></p> <div id="botad" align="center"> </div> <div id="copyright">&copy; Copyright 1999-2019<div> </footer></div> <script type='text/javascript'>var _merchantSettings=_merchantSettings || [];_merchantSettings.push(['AT', '11l8pS']);(function(){var autolink=document.createElement('script');autolink.type='text/javascript';autolink.async=true; autolink.src= ('https:' == document.location.protocol) ? 'https://autolinkmaker.itunes.apple.com/js/itunes_autolinkmaker.js' : 'http://autolinkmaker.itunes.apple.com/js/itunes_autolinkmaker.js';var s=document.getElementsByTagName('script')[0];s.parentNode.insertBefore(autolink, s);})();</script> </body> <script>'undefined'=== typeof _trfq || (window._trfq = []);'undefined'=== typeof _trfd && (window._trfd=[]),_trfd.push({'tccl.baseHost':'secureserver.net'},{'ap':'cpsh'},{'server':'p3plcpnl0694'},{'dcenter':'p3'},{'id':'808962'}) // Monitoring performance to make your website faster. If you want to opt-out, please contact web hosting support.</script><script src='https://img1.wsimg.com/traffic-assets/js/tccl.min.js'></script><script src='https://img1.wsimg.com/traffic-assets/js/tccl-tti.min.js' onload='window.tti.calculateTTI()'></script></html>