Lorna is a strong-willed Texas woman who's had enough of her untrustworthy husband Dale's (Val Kilmer) criminal acts and lack of husbandry. Fed up, she enlists the help of her old friend, Tiny (Kelli Giddish), to help her figure out what to do with Dale after his latest double-cross involving the theft of $100,000 from a bank.

ANCHOR BAY FILMS PRESENTS A CALLOUS DARK COMEDY DIPPED IN BLOOD THAT WILL LEAVE YOU... 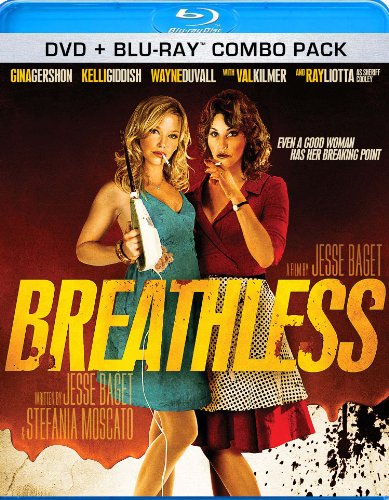 Beverly Hills, CA - In Texas the most deadly weapon is an unappreciated woman. On August 14th, Anchor Bay Films presents the gory, cunning comedy/thriller that will leave a welcomed bad taste in your mouth with Breathless

. This Texas gothic tale from director Jesse Baget (Wrestlemaniac, the upcoming Cellmates) and Academy Award(R) winning executive producer Nicolas Chartier (The Hurt Locker) comes to Blu-ray(TM)/DVD Combo for an SRP of $29.99 and DVD for an SRP of $26.98. Pre-book is July 18th.

Lorna (Gina Gershon, Showgirls, P.S. I Love You) is a strong-willed Texas woman who's had enough of her untrustworthy husband Dale's (Val Kilmer, Top Gun, Batman Forever) criminal acts and lack of husbandry. Fed up, she enlists the help of her old friend, Tiny (Kelli Giddish, NBC's "Law & Order: Special Victims Unit"), to help her figure out what to do with Dale after his latest double-cross involving the theft of $100,000 from a bank.

As the girls brainstorm for a "neat" solution, they medicate themselves with only the best of prescriptions - Tennessee whiskey - which leads them to even bigger problems. When Sheriff Cooley (Ray Liotta, Goodfellas, Hannibal) inconveniently enters the conundrum, the story evolves into a tale of revenge and survival that resolves in true Texas fashion: bold and ruthless.

About Anchor Bay Films
Anchor Bay Films is unique in that it offers the creative community a fully integrated distribution capability on all platforms and an international solution extending beyond the U.S. Anchor Bay Films is a division of Anchor Bay Entertainment and is on the ground providing quality distribution with operations in the U.S., United Kingdom, Canada and Australia, as well as distribution capabilities in other key territories. The company focuses on a platform release strategy for its films with an eye toward maximizing their potential across all ancillary distribution platforms. Recent releases include Seeking Justice starring Nicolas Cage, January Jones and Guy Pearce which opened on March 18th and Touchback starring Brian Presley which opened on April 13th. Films in its library include the critically-acclaimed comedy City Island starring Andy Garcia and Solitary Man starring Michael Douglas as well as the 2011 releases of Kill the Irishman starring Ray Stevenson, Vincent D'Onofrio, Val Kilmer and Christopher Walken, Toronto Film Festival award-winner Beautiful Boy with Maria Bello and Michael Sheen and Cannes 2011 premiere Corman's World. Anchor Bay Entertainment is a subsidiary of Starz Media, LLC which is an operating unit of Starz, LLC, a wholly-owned subsidiary of Liberty Media Corporation.