This ultimate collector's set for the ultimate fan features over 110 hours of content - including all 236 original broadcast episodes released for the first time in the US, plus 20 hours of special features including over three hours of newly-added special features. New content includes a retrospective documentary with new interviews looking back at the influential 10 years of the series, never-before-released cast appearances, unaired footage, a new gag reel and more!

FOR THE FIRST TIME EVER ON BLU-RAY

Over 3 Hours of All-New Bonus Features

The Perfect Holiday Gift for the Ultimate Friends Fan 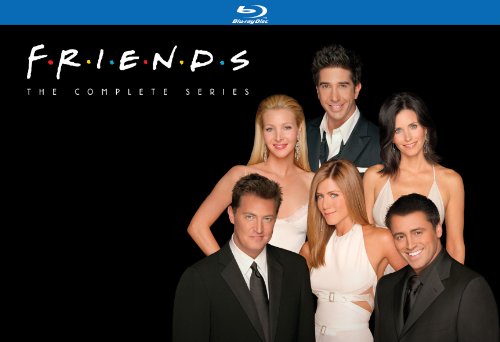 Blu-ray on November 13, 2012. This ultimate collector's set for the ultimate fan features over 110 hours of content - including all 236 original broadcast episodes released for the first time in the US, plus 20 hours of special features including over three hours of newly-added special features. New content includes a retrospective documentary with new interviews looking back at the influential 10 years of the series, never-before-released cast appearances, unaired footage, a new gag reel and more! All 10 seasons have been completely remastered in stunning 1080p high definition video with a 16x9 widescreen format and 5.1 audio. The Friends: The Complete Series Collection

Friends is an American sitcom about six friends struggling to survive on their own in Manhattan. In each episode, they find the companionship, comfort and support from each other to be the perfect solutions to the pressures of everyday life. The series stars 'The Ones That Were There For You' for ten seasons strong: Jennifer Aniston as "Rachel Green," Courteney Cox as "Monica Geller," Lisa Kudrow as "Phoebe Buffay," Matt LeBlanc as "Joey Tribbiani," Matthew Perry as "Chandler Bing," and David Schwimmer as "Dr. Ross Geller." Friends has also featured many notable guest stars including Tom Selleck, Aisha Tyler, Jon Favreau, Anna Faris, Hank Azaria, Bruce Willis, Reese Witherspoon, Christina Applegate, Sean Penn, Jon Lovitz, Alec Baldwin, and many more. Friends was created by David Crane and Marta Kauffman and aired on NBC from September 22, 1994 to May 6, 2004. The series was produced by Bright/Kauffman/Crane Productions, in association with Warner Bros. Television.

* True Friends: Documentaries: Retrospective documentaries with new interviews looking at the influential 10 years of the show and how it changed the cultural landscape of the 90's and first half of the new millennium
* Friends From the Start: Learn how the show was created and the challenges of finding the perfect cast and capturing "lightening in a bottle"
* When Friends Become Family: Enter the Writers Room and hear about the inspiration and development of some of the most iconic episodes and favorite moments from various seasons
* Legacy of Friends: Learn why the show had to come to an end, its influence on pop culture, and the legacy that it left behind
* The Original Producer's Cut for 'The One Where Rachel Tells Ross': 'The One Where Rachel Tells Ross' is re-assembled back to its original form. An introduction by Kevin Bright will set up the episode and explain why it was ultimately edited before air.
* The Original Script for 'The One Where Rachel Tells Ross'
* Friends On The Tonight Show with Jay Leno (2005)
* Friends Visit The Ellen DeGeneres Show (2004)
* The Ones With More Friends: The original extended broadcast episodes
* The One with the Never-Before-Seen Gags: Originally for the cast and crew, this never-before-seen gag reel has all the laughs that were too funny to include on the DVD
* The Rembrandts - "I'll Be There For You": Official music video featuring the cast of Friends

* Friends Around the World: Explores the Friends phenomenon around the globe
* On Location in London: Cross the Atlantic for a whirlwind English visit with Friends
* The One That Goes Behind the Scenes: The full hour-long Discovery Channel Documentary
* Behind the Style: The Look of Friends: Costume Designer Debra McGuire, Hair Stylist Jonathan Hanousek, and Makeup Artist Robin Siegel offer an inside look at Friends fashion, hair and makeup over the years
* The Flaming Lips Phoebe Battles the Pink Robots music video featuring Lisa Kudrow and directed by Kevin S. Bright
* Friends Final Thoughts: The cast and producers reflect during their final days at work and after series production ends
* Never-before-seen uncut version of Smelly Cat
* Matt LeBlanc Joey Joey music video
* Commentaries From 31 Episodes
* Friends of Friends video guestbook
* Gag reels from multiple seasons
* And More!