The beautiful collector's box set is designed with the sigils of the four main houses and comes with a premium dragon egg paperweight, a Blu-ray bonus disc of season two, episode one, as well as all of the bonus materials and interactive features from the original DVD and BD releases. This limited edition set is the perfect gift for any Game of Thrones fan! 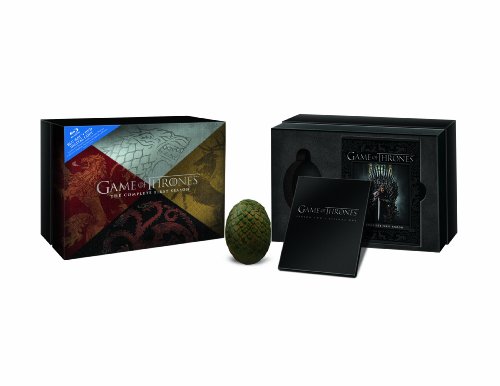 New York, N.Y., July 11, 2012 - Season one of the television phenomenon Game of Thrones will be available for the first time on Blu-ray with HBO Select (Blu-ray, DVD and Digital Copy* in one box set) this fall with the release of Game Of Thrones: The Complete First Season Collector's Edition

. The beautiful collector's box set is designed with the sigils of the four main houses and comes with a premium dragon egg paperweight, a Blu-ray bonus disc of season two, episode one, as well as all of the bonus materials and interactive features from the original DVD and BD releases for only $99.97. This limited edition set is the perfect gift for any Game of Thrones fan!

Based on George R.R. Martin's best-selling series A Song of Ice and Fire, the sweeping fantasy saga instantly became one of the network's biggest hits and the fastest selling TV on BD titles of all time. The Emmy(R) award winning show, which has been called "tantalizing" (Los Angeles Times) and an "HBO Triumph" (Boston Globe), follows kings and queens, knights and renegades, liars and noblemen as they vie for power in a land where summers span decades and winters can last a lifetime. As two powerful families engage in a deadly cat-and-mouse game for control of the Seven Kingdoms of Westeros, betrayal, lust, intrigue and supernatural forces shake the four corners of the Kingdoms and the bloody struggle for the Iron Throne will have unforeseen and far-reaching consequences.

Blu-ray (5 discs) - includes all DVD features plus:
* Blu-ray Complete Guide to Westeros - an interactive compendium of the noble houses and lands featured in season one, PLUS 24 exclusive histories of the Seven Kingdoms as told by the characters themselves done with animated illustrations that provide more information on the background of Game of Thrones.
* In-Episode Guide - in-feature resource that provides background information about on-screen characters, locations, and relevant histories while each episode plays.
* Anatomy of an Episode - an in-episode experience that explores the creative minds and colossal efforts behind episode six, "A Golden Crown."
* Hidden Dragon Eggs - find the hidden dragon eggs to uncover even more never-before-seen content.

DVD (5 discs):
* Complete Guide to Westeros - an interactive compendium of the noble houses and lands featured in season one.
* Making Game of Thrones -an exclusive 30-minute feature including never-before-seen footage from the set and interviews from the cast and crew.
* Character Profiles - profiles of 15 major characters as described by the actors portraying them.
* Creating the Show Open - an inside look at the creation of the Emmy(R)-winning opening title sequence for Game of Thrones
* From the Book to the Screen - executive producers David Benioff and D.B. Weiss along with author George R.R. Martin talk about the challenges of bringing Martin's epic fantasy novel to life on HBO.
* The Night's Watch - an in-depth look at the unique order of men who patrol and protect the Wall, a 700-foot ice structure that separates the Seven Kingdoms from the darkness beyond.
* Creating the Dothraki Language - an insightful glance into the comprehensive language created for the Dothraki people in Game of Thrones.
* Audio Commentaries - Seven audio commentaries with cast and crew including David Benioff, D.B. Weiss, George R.R. Martin, Emilia Clarke, Peter Dinklage, Kit Harington, Lena Headey, Mark Addy, Nikolaj Coster-Waldau, Maisie Williams, Sophie Turner, Isaac Hempstead Wright, Bryan Cogman, Harry Lloyd, Daniel Minahan and Alan Taylor.

About HBO Home Entertainment(R)
HBO Home Entertainment markets an extensive array of programs ranging from the critically-acclaimed and groundbreaking series The Sopranos(R), Sex and the City(R) and True Blood(R) to the multiple Emmy Award-winning mini-series The Pacific and Band of Brothers(R). The company's catalog contains hundreds of titles including the Peabody Award-winning children's program Classical Baby, provocative programs from HBO Documentary Films including When the Levees Broke, innovative movies from HBO Films including Temple Grandin, and comedy specials featuring stand-up performers like Chris Rock and Ricky Gervais. The division distributes programs to the home entertainment market in three formats: DVD, Blu-ray disc and digital download. Launched in 1984, HBO Home Entertainment has offices in New York, London and Toronto and the company's releases are marketed in over 70 countries around the world.