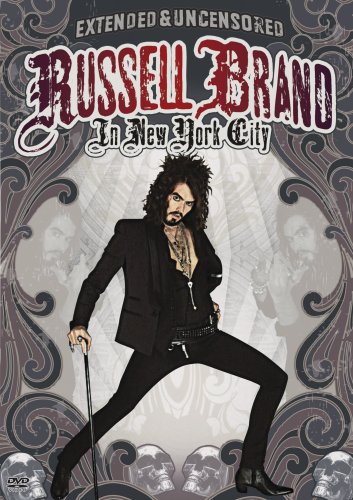 Russell Brand was great in Forgetting Sarah Marshall, but can he deliver the goods in his own stand-up comedy special?

Most of us, myself included, were introduced to Russell Brand when he stole every scene he was in during 2008Ēs Forgetting Sarah Marshall. His portrayal of rock star Aldous Snow as an obnoxious, egotistical jerk was downright hilarious. Having been a superstar in England for a while now, Brand put himself on the US pop culture map with this out-of-the-blue supporting role in a Hollywood film. Riding his recent wave of domestic success (heĒs slated to reprise his Aldous Snow role in next yearĒs Get Him to the Greek), Brand performed a stand- up routine in New York City, which originally aired on Comedy Central. That performance is captured on this new DVD, Russell Brand In New York City: Extended & Uncensored.

Brand isnĒt afraid to talk about how famous he is, especially in his native British land. At first it might come across as self-serving and hugely egotistical, but we soon realize that itĒs all part of the act. He then goes on to discuss his position as host of last yearĒs MTV Video Music Awards, and the difficulty of leading a huge US awards show when no one in the US knows who you are yet. This leads into the VMAĒs promotional campaign involving Britney Spears, and BrandĒs bit about having to meet someone after already seeing their most intimate body parts nearly brings the house down.

He goes on about the VMAs for quite a while, albeit interspersing some other material in-between. His candid talk acknowledging his rather uncomfortable performance as VMA host is quite interesting at first, but it gets old once we realize heĒs been talking about the subject for at least 20 minutes. Brand eventually gets to some sex talk, but this happens with 10 minutes left in the program. HeĒs at his best discussing a subject he truly loves, and ends the proceedings on lewd, crude, but damn hilarious note.

Despite some strong, very funny moments, and although he never really tells any dud jokes, Brand just couldnĒt match the same charisma and hilarity that he pulled off in Forgetting Sarah Marshall. Stand-up comedy is like night-and-day when compared to scripted comedic material, and perhaps that is the reason behind the difference in laugh quotient. I hate watching a stand-up performance and comparing the talent to other modern comedians, but thereĒs really no way around such a comparison. Brand simply lacks the wit of the best comedians out there today, relying on smugness and a bit of androgyny to attempt to carve out his own comedic niche. He might get there someday, but he just canĒt compete with the best of the best yet.

DonĒt get me wrong, stand-up Russell Brand is a thousand times funnier than anytime the likes of Dane Cook or any of the Blue Collar Comedy idiots have taken the stage. With a bit of fine-tuning and a little less vanity and self-appreciation, Brand could really become a hell of a stand-up comic. Comedy CentralĒs DVD is a good one, with some great extras, including a deleted sequence from the show involving a drunk girl in the audience that stops the show on a dime. Brand really lets her have it every time she interrupts, and these fascinating sequences almost make us feel sorry for herųalmost. ItĒs also nice to have his entire monologue from the VMAs at our disposal here.