The story of an ex-soldier turned contract killer who plunges into the heart of darkness - and takes the viewer with him on a ride from which there is no return. From director Ben Wheatley comes a mind-blowing genre concoction that marks a new milestone in the annals of modern horror. 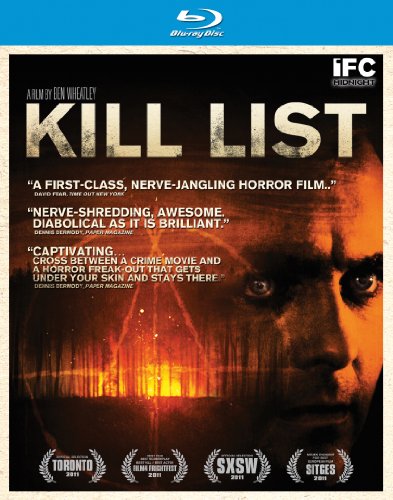 is the story of an ex-soldier turned contract killer who plunges into the heart of darkness - and takes the viewer with him on a ride from which there is no return. The "#1 horror film of the year" (David Harley, Bloody-Disgusting) arrives on high-definition Blu-ray and DVD on August 14, 2012.

From director Ben Wheatley (Down Terrace, The ABCs of Death) comes a mind-blowing genre concoction that marks a new milestone in the annals of modern horror. Eight months after a disastrous hit job left him physically and mentally scarred (and struggling to support his wife and son), Jay (Neil Maskell, Pusher, Basic Instinct 2) is pressured by his partner and best friend Gal (Michael Smiley, Wire in the Blood) into taking a lucrative three-part assignment: kill a priest, then a dealer in torture porn, and finally a member of Parliament. As the two men - one a volatile hothead, the other a careful professional - carry out their work with shocking brutality, Jay's world begins to unravel until paranoia and unexplainable visions send him reeling.

Also starring MyAnna Buring (Twilight Saga: Breaking Dawn 1 & 2, The Descent) and Emma Fryer (Home Time, PhoneShop), KILL LIST premiered at the SXSW Film Festival and went on to win awards for Best Film, Best Screenplay, Best Actor and Best Kill at Film4 Frightfest 2011. Upon its theatrical release by IFC Films, it received glowing reviews. The Boston Globe's Ty Burr called it a "cross between a crime movie and a horror freak-out that gets under your skin and stays there." "This is one of the most violent and disturbing films you'll see in an art house," said Peter Hartlaub of the San Francisco Chronicle. The New York Times' Jeannette Catsoulis said, "The film's title may draw you in, but it's the texture that keeps you watching."

"The camera is unflinching, and so is Wheatley, as the story moves toward the unthinkable. It's left to you when and whether to look away," wrote Betsy Sharkey of the Los Angeles Times. The Village Voice's Chuck Wilson called the movie "brutal and bloody and utterly unnerving." MSN Movies' Glenn Kenney said, "It's remarkably clever and resourceful filmmaking, and a little on the diabolical side as well." David Edelstein of New York magazine wrote, "The final twist is both baffling and repulsive, but as an evocation of the triumph of evil, it's peerless." Eric Kohn of indieWIRE summed it up: Kill List

"will leave your bones rattling."

About IFC Entertainment
A leader in the independent film industry, IFC Entertainment consists of multiple brands that are devoted to bringing the best of specialty films to the largest possible audience: IFC Films, Festival Direct, IFC Productions, and the IFC Center. IFC Films is a leading distributor of independent film. Its unique day and date distribution model, 'IFC In Theaters,' makes independent films available to a national audience by releasing them simultaneously in theaters as well as on cable's On Demand platform and through Pay-Per-View, reaching 50 million homes. 'IFC Festival Direct' features a wide selection of titles acquired from major international film festivals and offers them exclusively through Video on Demand. IFC Productions is a feature film production company that provides financing for select independent film projects. IFC Center is a three screen, state-of-the-art cinema with luxurious seating and HD digital and 35mm projection that shows art-house films in the heart of New York's Greenwich Village. IFC Entertainment's companies are subsidiaries of Rainbow Media Holdings LLC.